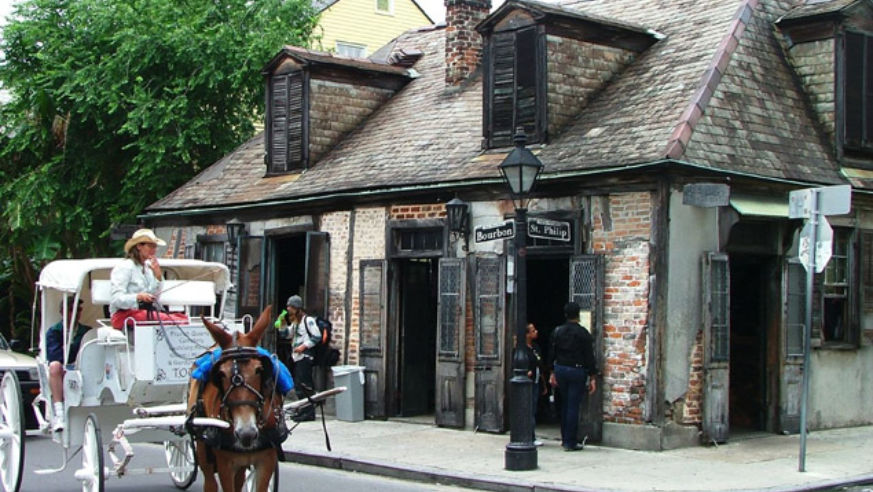 Just how far back in time does human achievement go in this country? We challenged ourselves to find out and in the process discovered everything from a prehistoric settlement near St. Louis to a pirate bar in New Orleans.

What constitutes "old" depends on where in the world you are—200 years sounds old, but not in comparison with 2,000 or 20,000. But just how far back does human achievement go in this country? We challenged ourselves to find out. We hit the road, spoke to historians, and dug deep in the history books to find the oldest of the old when it came to everything from cities to airports across America. And while not everything on this list is old in the European sense of the word, you'll find that it's some of the 19th and 20th century firsts (the airport, the skyscraper, for example) that established the United States as an important player in the world's history. Of course, there are churches, cities, and archaeological finds that well pre-date our own 1776 Independence, too, thanks to Spanish settlements, Pilgrims, and the Native Americans who have been here all along. Here are the top 12 places for exploring America's past.

UNESCO officially named Cahokia (15 minutes from modern-day St. Louis) the largest and earliest prehistoric settlement north of Mexico back in the 1980s. It was thought to be just a seasonal encampment, important but not that exciting. Then, in January 2012, reports were released showing that this was actually the first true North American city: 500 thatch-roofed rectangular houses were gridded around ceremonial plazas and stretched eight miles on either side of the Mississippi River; at its peak it had 20,000 inhabitants. Visit the Cahokia Mounds State Historic Site and get a sense of the scope from the top of Monks Mound, a 100-foot-tall monumental outlook that took an estimated 22 million cubic feet of earth to make. 30 Ramey St., Collinsville, Ill., 618/346-5160, cahokiamounds.org.

Art, much like beauty, is in the eye of the beholder. Still, few can debate the impressiveness of these 500-plus-year-old rock paintings in Chumash Painted Cave State Historic Park in the Santa Ynez Mountains near Santa Barbara, Calif.. Colorful and abstract symbols, possibly representing mythic figures or natural phenomena (like a 1677 solar eclipse), were applied with crushed mineral pigment for unknown reasons. Is it art? Is it graffiti? Bring a flashlight and theorize away. The paintings are easily viewed behind a protective grate after a short, steep hike. Painted Cave Rd., Santa Barbara, Calif., 805/733-3713, parks.ca.gov.

Seventy miles west of Albuquerque, N.M., the Acoma people have lived continuously for nearly 900 years atop a 367-foot sandstone bluff. Homes are multi-story, multi-family "apartment complexes" that can be reached only by exterior ladders, much like the cliff cities of Mesa Verde and Gila, where their first nation brethren the Anasazi and the Mogollon lived, respectively. Group tours depart daily from Sky City Cultural Center at the bottom of the mesa, while the Haak'u Museum screens culturo-historical videos, offers fantastic pottery for sale (with plenty more vendors outside), and fry bread with green chile stew in the café. Interstate 40 & Exit 102, 800/747-0181, sccc.acomaskycity.org.

Thanks to the magic of dendrochronology (a.k.a. tree-ring dating), the Fairbanks House was declared North America's oldest timber-framed house. It's amazing that the wooden house is still standing, about 375 years after it was built. Eight generations of the Fairebanks family lived in this homestead, 25 minutes outside of Boston, first in the two-story, two-room core, and later, as fashions dictated and wealth allowed, throughout its "new" additions. No grand renovation ever unified the various sections, so much of the original handiwork and historical details and construction techniques have remained. The house now exists as a museum and contains furniture, paintings, and other artifacts from the Fairbanks family. 511 East St., Dedham, Mass, 781/326-1170, fairbankshouse.org.

Although Santa Fe, N.M., can feel a bit like a studio backlot at times, there is some authenticity under all that freshly spread adobe. This is America's oldest capital city, after all, and the third oldest surviving European settlement (after St. Augustine, Fla., and Jamestown, Va.). Minus a few years of Indian occupation and partial razing during the Pueblo Revolt, serene San Miguel Chapel has stood as a compact call to Catholicism from the day Spain planted its founding flag right until U.S. annexation. The Spanish Colonial church was finished in 1710 (it replaced a 1626 chapel that was destroyed in a fire) and anchors the Barrio de Analco Historic District. Mass is still given on Sundays within its cool confines, beneath thick wooden beams and in front of a gorgeously carved wooden reredos. 401 Old Santa Fe Trail, Santa Fe, N.M., 505/983-3974.

Nightlife is a murky business—especially when you're dealing with pirates and smugglers, which is how this bar got its start. The squat townhouse is the oldest structure to operate as a bar in the States, and it may even be the country's oldest continuously operating bar, period. Located on the far end of Bourbon Street, in New Orleans, it's the Vieux Carré's best remaining example of French briquette-entre-poteaux construction. And the establishment has weathered the centuries, first as a grog-soaked home base to nefarious privateers Jean and Pierre Lafitte, a gay bar in the 1950s, and the laid-back, candle-lit pub that survives today. 941 Bourbon St., New Orleans, La., 504/593-9761, lafittesblacksmithshop.com.

Back when museums were officially known as a "cabinet of natural and artificial curiosities," a group of Salem, Mass., sea captains founded the East India Marine Society with a specific charter provision to collect such specimens. That legacy is now the nation's oldest continuingly operating museum. (The Charleston Museum in South Carolina was founded in 1773, but had a period of closure and didn't open to the public until 1824.) Today, you can see the Peabody Essex Museum's 1.8 million pieces of maritime, Asian, African, Indian, and Oceanic art plus 22 historic buildings, including the Qing Dynasty Yin Yu Tang house. East India Square, 161 Essex St., Salem, Mass., 866/745-1876, pem.org.

Perhaps it was all that cherry tree business, but George Washington himself had a vision of a modern capital with a botanic garden to teach the importance of plants to the young nation. This didn't become a reality until 1820, when President Monroe and an act of Congress created the United States Botanic Garden on the grounds of the Capitol building. Today's permanent location—a three-acre plot adjacent to the Mall and southwest of the Capitol—was established in 1933. Open every day of the year, the site allows visitors to explore a butterfly and rose garden outside and jungle, desert, primeval, and special exhibitions inside the gorgeous 1933 glass conservatory. 100 Maryland Ave. SW, Washington, D.C., 202/225-8333, usbg.gov.

With a flourish of the pen, Ulysses S. Grant changed where kids spend their summer vacations forever when he created the world's first national park. Yellowstone was made up of pristine wilderness straddling the Montana, Wyoming, and Idaho territories. (Tthey weren't states back in 1872, and the federal government oversaw the park until the National Parks Service was created in 1916.) Today, Yellowstone continues to be the system's bubbly, geyser-riffic, and wildlife-filled emblem of eco-consciousness. There is some controversy when it comes to which park is technically the oldest, though. Hot Springs National Park, southwest of Little Rock, Ark., was made a "government reservation" back in 1832, but didn't join the parks system until 1921. 307/344-7381, nps.gov.

When you are done looking at the prehistoric mounds at Cahokia, head into downtown St. Louis for a more modern pile. It's easy to define today's skyscrapers—just look up! But sussing out their more diminutive ancestors can be like figuring out if your great-great-great-great-uncle Jeremiah fought in the Civil War—and might bring architects to just that. One thing all experts can agree on: Skyscrapers must have a load-bearing steel frame. For that, Louis Sullivan's Wainwright Building, in downtown St. Louis, rises as America's oldest surviving specimen. (Chicago's Home Insurance Building, from 1884, was technically the first, but it was razed in 1931.) Dwarfed today by its neighbors, the Wainwright Building's 10 stories of red brick aesthetically defined what modern office buildings were to be in both form and construction. 705 Chestnut St., St. Louis, Mo.

The Leap-the-Dips at Lakemont Park in Altoona, Pa., has been white-knuckling riders for 110 years by roaring down a figure eight of oak tracks at 10 mph with a vertical height of 41 feet. This may sound tame compared with the cheek-blasting G-forces of today's sidewinding behemoths that loop your stomach in your lap, but a rickety ride on the world's oldest roller coaster can still thrill, especially when you consider that it's the last remaining side-friction model in North America—no up-stop wheels bolt it to the track. That nine-foot drop suddenly feels a whole lot steeper. 700 Park Ave., Altoona, Pa., 800/434-8006, lakemontparkfun.com.

You won't be seeing any A-380s touching down at College Park Airport. The runway is only 2,600 feet long (jetliners need about 8,000 feet). We bet Wilbur Wright had no idea what the future of aviation would look like when he first brought military pilots here to train a century ago. Today, you can take the half-hour Metro ride from downtown Washington, D.C., to visit the on-site aviation museum. Temporary exhibitions are put on in conjunction with the Smithsonian, and there are classic aircraft on display, including a 1910 Wright Model B reproduction and the biplane-like Berliner Helicopter No. 5, which made its first controlled flight from here in 1924. 1985 Cpl. Frank Scott Dr., College Park, Md., 301/864-6029, pgparks.com.