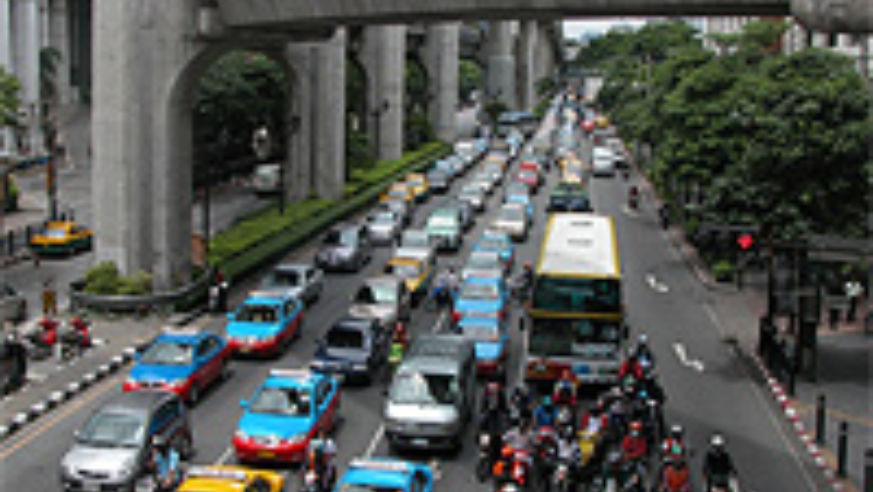 If you've spent any time in countries such as Thailand, India, Brazil, or Nigeria you've inevitably stumbled across the motorbike taxi. (With more than 20 million in operation, it is easily one of the most common taxis available in the world.) And if you've ever taken a moto-taxi, you've inevitably experienced a frustrating debate with your driver over a reasonable fare—a stressful affair that often leaves both parties dissatisfied, and lends itself to bad behavior by both tourist and driver. (Not to mention that without any regulation, you leave the fate of your location wholly at the discretion of your driver.)

But haggle no more. Following eight years of research and development, Paul Giles, an American ex-pat living in Thailand and president of WorldMoto, developed the world's first motorbike taxi meter.

The MotoMeter is a tamper-proof, weather resistant device that uses GPS technology to calculate taxi fares. The device also serves as a black box, recording speed, acceleration, braking information, crash force, and whether or not passengers are sitting or have been ejected from their seats. And if that weren't enough, WorldMoto has incorporated an LED "infotainment" screen to display geographically-relevant ads (e.g., nearby fast food restaurants) for the duration of the ride. The ads generate revenue for both the driver and WorldMoto.

The system costs 5,599 baht per box (about $180 USD), and includes free installation. Drivers will receive the same fares as before (according to the Bangkok Post "fares are typically fixed by the co-operatives working each major intersection") plus additional revenue from advertisements.

Giles hopes that his device will bring moto-taxis into greater popularity in both developing and developed countries - possibly even stateside. According to AllAboutBikes.com, Giles says that WorldMoto "[believes] that as energy prices continue to escalate, and the US population starts to rely more heavily on mass transit to escape the high oil prices, cash strapped municipalities, looking for creative ways to ease the burden on their communities, will increasingly be in favor of this highly efficient, proven way of extending the reach of mass transit into low density suburbs at next to no cost…it is only a matter of time."

What are your thoughts—is this a useful product? Have you ever taken a moto-taxi? Would you like to see moto-taxis operate in the States?

Do You Love Public Transportation as Much as These Guys?