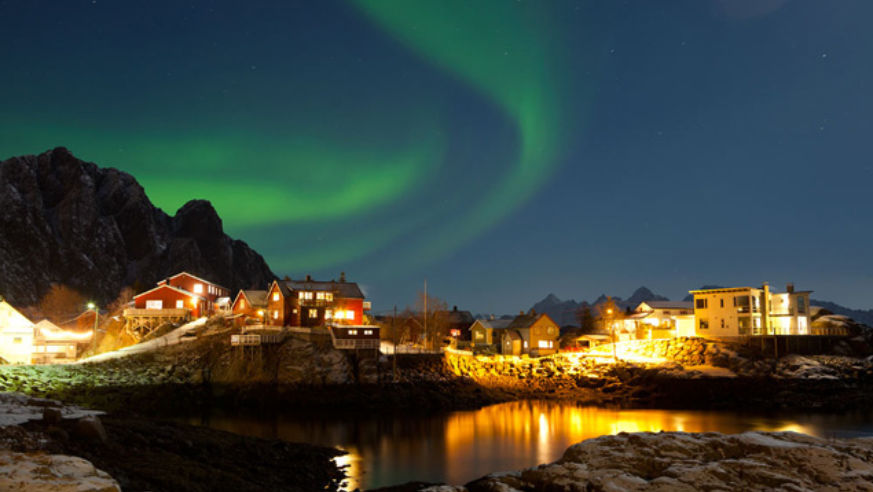 Worms. Ice. Coral. Some of our planet's most unsuspecting elements are responsible for the most extravagant productions (move over, Cirque du Soleil). Best of all, these shows are on the house, courtesy of Mother Nature.

From the spectacle of thousands of fireflies flashing in unison in a forest in Papua New Guinea to the wonder of a night sky painted blue, green and purple over a lonely fjord in northern Norway, the planet brims with natural-made miracles.  Pack your sense of adventure, an appreciation for the unpredictable, and follow our lead around the world to spots where light, coral, ice, butterflies—even worms—create some of the world's prettiest drama.

When energetic particles from the magnetosphere hit the earth's atmosphere, the skies in the planet's northernmost regions turn into an artist's palette of green and blue swathes and swirls—and, more rarely, red and purple—in the spectacle known as the Northern Lights. The winter of 2012 brought the most intense illuminations in the past 50 years thanks to the Solar Maximum. But the lights make predictable appearances every winter in places like the Lofoten Islands and Tromso, where you can maximize your chances of seeing them during a six-day cruise with Hurtigruten through Norway's northernmost locales. A delivery ship transporting goods and passengers along the coast, the cruise line offers well-priced packages in a notoriously expensive destination (hurtigruten.us, from $1,203 per person for a five-night "Classic Voyage South" cruise from Kirkenes to Bergen, includes full board).

The butterfly effect is in full effect every autumn when monarchs from the Rocky Mountains make like snowbirds, flying between 1,200 and 2,800 miles south for the more moderate climes of forested regions high in Mexico's mountains. Guided by the sun's orbit, the butterflies reach Mexico by late October and early November, where they spend the winter hibernating. The trees they converge upon pulse with the movement of their delicate wings. Angangueo in Michoacán is the most popular place to see them. But for less of a tourist crush, head to the high forests two hours outside of Mexico City near the town of Valle de Bravo. See them on your own or book a tour through Tours by Locals (toursbylocals.com, $180 for two people for a tour from Mexico City).

Who knew coral had such flamboyant sex lives? Every year—most often in the months of September and October, in the days following the full moon—the coral-clad walls fringing the scuba diving-crazed island of Bonaire become awash with tiny white, orange, and pink spheres (yep, eggs and sperm) that erupt, volcano-like, from the corals and float on the currents to continue the cycle life. In addition to the divers there to ogle the nighttime scene, the reef comes alive with thousands of fishy mouths anticipating an annual feast like no other. Captain Don's Habitat gives you the option to pay one price for accommodations, diving equipment, and guided diving excursions (habitatbonaire.com, $666 per person for 7 nights in an ocean view room; includes 6 single-tank boat dives and unlimited shore diving).

Nothing makes you feel like a kid again like chasing fireflies. But it's one thing to see a few flitting in your suburban backyard and quite another entirely to witness several massive trees illuminated with fireflies, like so many strands of Christmas lights strung through their branches. At locations across Southeast Asia—from India and Malaysia to Papua New Guinea—fireflies congregate in trees and bushes along mangrove-lined rivers where they breed, synchronizing their flashes for all to see.  Walindi Resortin Papua New Guinea offers nightly tours to take in the spectacle in the surrounding forest (walindi.com, tours from $8 per person).

That the planet is broiling with molten rock and unfathomable heat beneath our feet is no secret. Nowhere on earth is that more obvious than in Yellowstone National Park, which contains the world's most diverse display of heat-inspired drama. Old Faithful draws the masses, but a more interesting and varied foray into the geothermal wonders awaits along the boardwalk trail of West Thumb Geyser Basin. The landscape is always in flux, but you can see more than 15 geysers, boiling springs, cones, and deep, scalding pools colored emerald, sapphire, and black pocketing the earth's crust (nps.gov, $25 per vehicle or $12 per person on foot, kids under 16 enter free).

Swimming in a lake full of jellyfish might sound like a form of medieval torture. But in a freshwater lake of Palau's Rock Islands, the predator-less jellyfish have lost their ability to sting. Sam's Tours runs daily snorkel trips to Jellyfish Lake, reached by a short but steep hike over the limestone island's crest and a quick swim to the other side of the lake. Come sunscreen- and lotion-free so you won't pollute the lake, then gently stroke your way to where the jellyfish are clustering (they follow the sun around the lake throughout the day, soaking up energy). Through your mask or goggles (fins are not allowed), you'll see thousands of the orange-colored polyps pulsing through the green water. Moving amongst them and diving down to feel their soft bodies brush against your own is like something from a dream (Samstours.com, $115 per person for a day tour; park permit is an additional $35 per person).

The limestone caves in the Waitomo region of New Zealand's North Island are home to a fascinating phenomenon—the presence of Arachnocampa luminosa, a unique-to-New Zealand glow worm that manifests itself like an entire galaxy of light on the ceilings and walls of the dark caves here. Boats bring visitors into the dark netherworld of Waitomo Glowworm Cave to see the worms emit light. For more adrenaline, sign up for a blackwater rafting trip to travel deeper into the grottoes via ziplines and tubes (Waitomo.com, from $39 per person to visit the caves, $181 ($163 if you book online) per person for a 5-hour "Black Abyss" blackwater rafting trip).

Imagine the Northern Lights underwater—that's what a boat tour through a bioluminescent bay is like. The brightest such body of water in the world can be found in Mosquito Bay off the coast of Vieques, Puerto Rico. The billions of dinoflagellates (microscopic plankton) that live here give off a blue and green glow when anything agitates the water around them—creating the appearance of swirls of fairy dust as boat engines ply the lake (and swimmers glide across the water). Island Adventures Biobay Tours offers year round trips to Mosquito Bay where you can see the phenomenon for yourself. Set your camera to an ISO of 1200 for the best shot at capturing the scene (Biobay.com, $40 per person).

The thunder of an iceberg being born is like no sound on earth. Want to see the most active calving glacier in the Northern Hemisphere? Make the trek 155 miles north of the Arctic Circle to Ilulissat, Greenland (you can get there by flying from Copenhagen). Some 20 million tons of ice break away from the Sermeq Kujalleq glacier on a daily basis, bombing into the sea and beginning new lives as drifting icebergs. Ask for a room on the top floor of the Hotel Hvide Falkand you'll be able to watch (and hear!) the groaning ice cap from your balcony (Hotelhvidefalk.gl, doubles from $250).

You'll likely melt the rubber on your sneakers' soles at some point during the 1.5 hour hike to this active, lava-producing volcano about 15 miles outside of Guatemala City. Consistently active since 1965, Pacaya has erupted more than 20 times in the last 500 years. Be sure to heed local advice on the current safety of hiking Pacaya during your visit. If the volcano is deemed safe for a tour on the day of your visit, enjoy an experience like no other—toasting a marshmallow on a stick over a simmering, bright orange lava flow. Tours can be arranged in the popular tourist town of Antigua, about 90 minutes by shuttle bus from Pacaya (Turansa.com, $15 per person from Antigua).