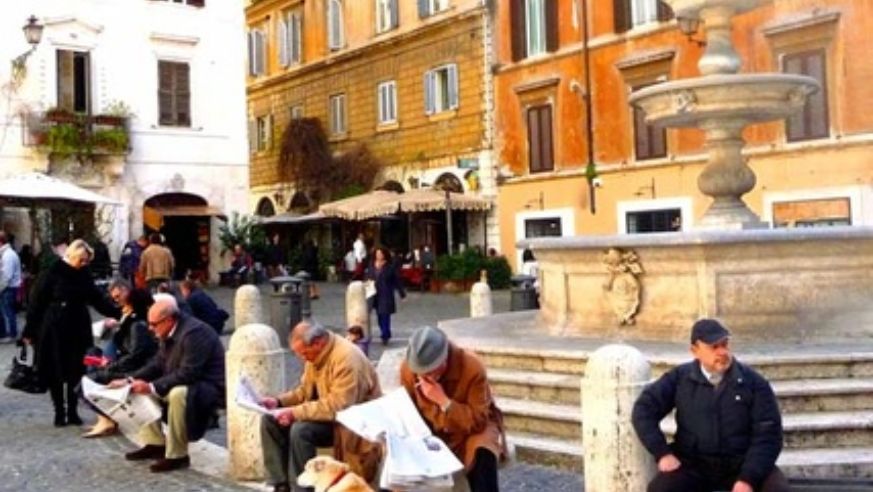 Tucked between the Roman Forum and the Quirinale Palace, Monti housed the poorest locals back in ancient Roman times, when it was called Suburra ("sub urbis"), Latin for "under city." In recent years, this neighborhood has morphed into the place to see and be seen, especially for bohemian thirty-somethings. Its winding, well-kept cobblestone streets are home to some of Rome's best locali (hangouts) as well as eclectic shops and piazzas for observing everyday life.

La Bottega del Caffe should be your first stop.You can't miss this bar since it literally overflows with patrons, who spill out from under its awning and into the neighborhood's main square, Piazza Madonna dei Monti. La Bottega del Caffe is at its best during the early evening aperitivo, when you can people watch over platters of cheeses and cold cuts. You can always just grab a drink and look cool outside and sit by the fountain. Piazza Madonna dei Monti, 5.

Just around the corner, Urbana 47 specializes in organic, seasonal fare like vegetable polpette with sweet pecorino, sheep's milk yogurt, and ravioli with pumpkin and amaretto. The decor is warmly retro and includes playful, knitted works by local artist Alessandra Roveda, who can easily cover any piece of furniture with colorful yarn. Brunch from 9 a.m. on Sundays, daily aperitivo from at 6 p.m. The restaurant stays open for dinner until after midnight. Via Urbana, 47.

On the opposite side of Monti is Ristorante La Taverna dei Fori Imperiali, which my friends call Dustin Hoffman's because they once spotted the actor eating there. The owner and chef Alessio Liberatore's family has been in the restaurant business for over a century. His wife Maria Grazia heads up the staff, and their two children Claudia and Aldo rattle off more specials than you can keep track of! The pappardelle al ragu di vitello tartufo e verdure, a regular menu fixture, is sublime. Last time I went there, I spent less than $50 for a dinner that included generous amounts of wine, antipasti, heaping courses, dessert, and coffee. Seating is limited, so it's best to reserve in advance. 011-39/066-798-643, Via della Madonna dei Monti, 9.

Abito is one of my favorite places to shop because most of the clothes are made in the back room by the owner herself, Wilma Silvestri. She has a knack for contemporary designs and for resurrecting vintage men's and women's clothes and turning them into something off the runway. Via Panisperna 61.

Are we in Notting Hill or are we in Rome? That's what you might ask yourself when you step into Pulp, the eclectic second-hand store that carries everything from old Fendi bags to your next punky costume-party outfit. The store prides itself on its vintage designer clothing and all around funky stuff. 011-39/0648-5511, Via del Boschetto 140.

Want more insider recommendations? Read up on five quintessential trattorias in Eat Like a Local: Rome and check out our complete Rome coverage.