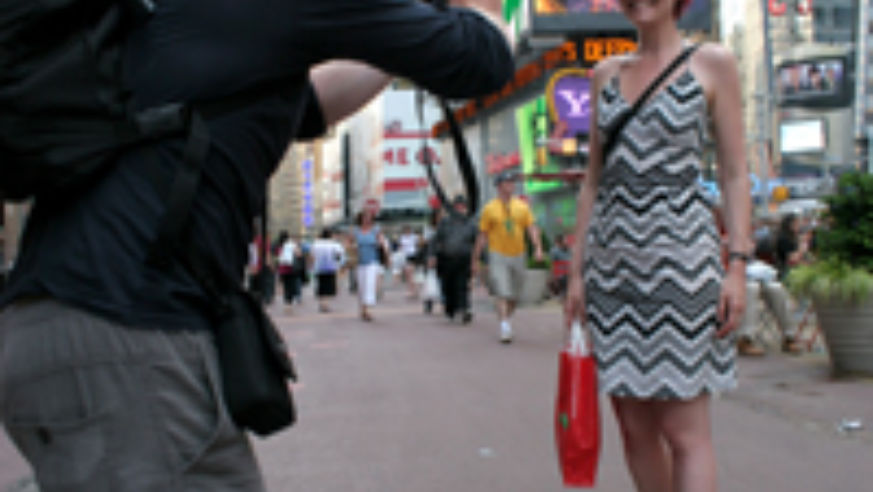 To tour the 23 square miles of Manhattan, you can roam by bus, pedicab, horse-drawn carriage…trust me, the list goes on. But have you ever considered going on a "photo safari" of the city? It's essentially a walking tour led by a pro photographer, who helps you capture the most compelling shots possible.

There are two types of photo safaris: Either the photographer takes pictures of you and your friends at landmarks around the city, or the expert teaches you how to shoot memorable photos. In other words, the tours differ mainly in who is behind the lens: you or the tour guide.

Here are some tours to consider:

Allan Einhorn, a native New Yorker, runs Photo Walking Tours of NYC. Choose the neighborhood(s) you photograph, and you'll get about two or three hours to explore. Popular sites include Chinatown, Little Italy, the Brooklyn Bridge, Central Park, and the South Street Seaport.

Einhorn's tours can include up to six travelers, and all he asks is that you have "a reasonable understanding" of how your camera works before you tour with him. He also provides you with a written handout of "12 Tips for Taking Better Photographs" to aid you on your photo shoot. Fees run you around $75 to $120 for the first two photographers-in-training, and an extra $15 to $25 for each additional traveler. If you own an SLR, bring it along to make the lessons that much more in-depth. But don't be discouraged if your camera is a bit more simplistic. If you don't own a fancy pants camera, a point-and-shoot will do you just fine (phototoursnyc.com).

Maybe you're not interested in taking your own pictures though. Perhaps you prefer having someone else firing the camera? No worries! PhotoTrek Tours has got you covered. For a two hour tour, PhotoTrek charges $100 a person for groups of three to eight visitors and $125 a person for groups of two (meaning that it would be advantageous to invite some friends along). Keep in mind that additional charges apply to longer-than-usual outings. Add 50 bucks per person if you want the tour to last three hours (phototrektours.com).

Similar to Einhorn, a perk of traveling with PhotoTrek is that you decide what's covered. Travelers set their own agenda; or, if they prefer, they can select a tour from a pre-determined list of popular sites to visit. For instance, PhotoTrek's Best of New York list of popular sites covers the following spots, as long as time permits: Times Square and the Theater District, Central Park, Midtown (including Rockefeller Center, St. Patrick's Cathedral, Grand Central Station, and Radio City Music Hall), Uptown and Downtown Manhattan, and the Brooklyn Bridge.

Something to remember: Personalized tours like these can sell out quickly during peak season. Sometimes nothing's available for two or three weeks, so reserve a spot as soon as you can to avoid being shut(tered) out.

7 camera settings you need to know

How to take picture-perfect photos: A slide show