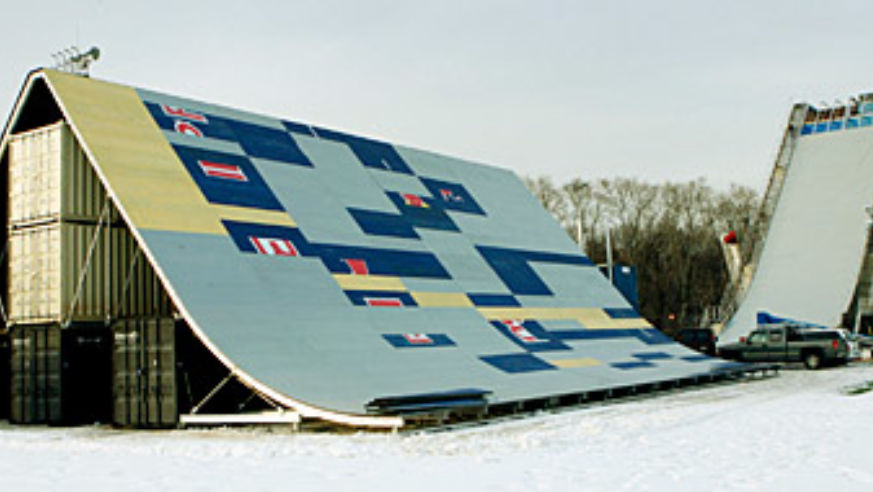 New York City has ramped up this year's Winter Jam festival by erecting a nine-story ski jump in the park to host the Red Bull Snowscrapers pro snowboarding competition on February 5, followed by a day of winter sports and music in the park on February 7. The action is free to watch at East River Park, at F.D.R. Drive and Houston Street.

On Thursday, 16 top pro snowboarders, including Olympic gold medalist Shaun White, will compete on the 90-foot-tall ramp, a.k.a. the Snowscraper—the largest structure ever built in a city park for a special event, according to the city's Parks & Recreation Department. The 80-foot-long hip (the down slope that snowboarders land on after their aerial tricks) is essentially a double-sided pyramid that runs perpendicular to the ramp, so the riders must angle themselves to land on the right or left side, making for some interesting maneuvering.

Adding to the entertainment will be a spectator village featuring musical performances by headliner Anthrax, along with bands Black Gold and Valient Thorr, with sponsor tents set up with samples for the crowd. The gates open at 3 p.m. and the competition is scheduled to start at 5:45 p.m., with the finals taking place two hours later. Anthrax will cap off the night with a performance at 8:55 p.m.

The sports action continues in the park on Saturday from 11 a.m. to 4 p.m., where people of all ages can tube down a 70-foot-long snow flume, snowshoe and cross country ski through a snow field (weather permitting), and scale an ice-climbing wall—with all equipment provided for free. Those who'd prefer to just watch the action can head over to the Future of Snowboarding Invitational to witness up-and-coming Olympic hopefuls tackle the ramp, take in a performance by the Skyriders professional trampoline acrobats, or cheer on participants in a snow-sculpture-making contest.

The Pride of New York Warming Hut & Winter Market will provide a break from the cold with free samples from New York State farmers and producers, and various vendors will have tents set up for free demos of the latest gear. Local bands Apollo Run and Dujeous and singer Jenda White will perform throughout the day.

If you can't make it to NYC, but still want to see the pro competition, you can watch the Red Bull Snowscrapers event online at go211.com Thursday starting at 6 p.m. (ET). In the New York area, MSG Plus will air the jam session at 6 p.m. and the finals at 10 p.m. Or watch a delayed broadcast of the event on February 15 at 5 p.m. (ET) on NBC.

Here's a video preview of the snowboarding:

How rock bands find free places to crash—and how you can, too