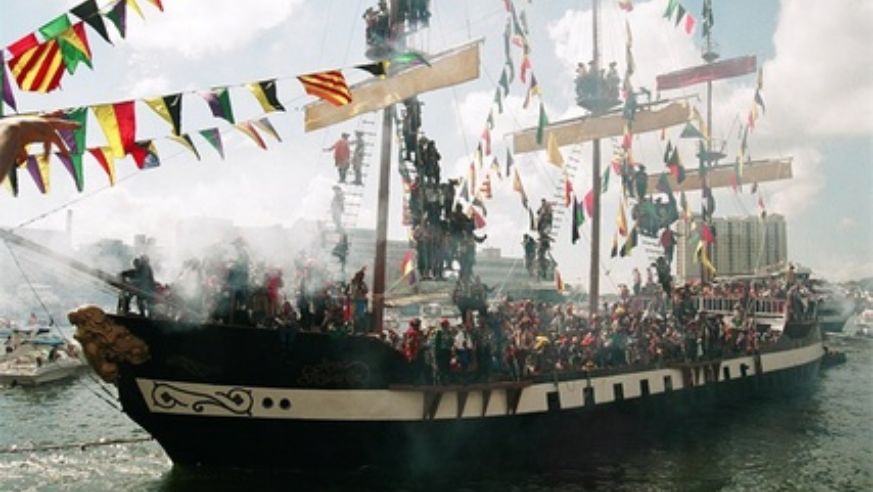 When Mike Guerriero was laid off from his pharmaceutical marketing job in late 2007, he decided to follow his dreams. Or at least the dreams of someone who "lives to party": He packed up a car and spent about seven months on road trips, traveling from one street festival to the next.

In Party Across America!, Guerriero reviews the best and most surreal festivals.

I recently chatted with the 32-year old about his cross-country travels. Here's an excerpt from the interview:

Name a festival that’s great for families.
The Gasparilla Pirate Festival in Tampa, Fla. is like Disneyland during the day for the kids. They get this 165-foot long ship, and businessmen in Tampa get selected to play the pirates. There's a three or four–mile parade. The adult portion starts at night when the parade winds into downtown and becomes a big street party.

What's the best party we haven't heard of?

The World's Largest Disco in Buffalo, N.Y., the Saturday after Thanksgiving. It's the biggest weekend of the year in town, but no one outside of Buffalo knows about it. There are about 8,000 people discoed out: platform shoes, bell bottoms. Some B-rate '70s celebrities show up. I actually spent the weekend with the actors who played Greg, Peter, Bobby, and Cindy Brady. They invited me to Niagara Falls with them.

What's the best thing you ate at the festivals?

At St. Paddy's Day in Savannah, Ga., which had 500,000 attendees. I had some amazing green grits with honey and butter at Rail Pub. Or maybe its was the sweet pecan pie at the Jackson, Miss. Jubilee Jam. You can't walk ten steps down the street without seeing pecan pie there.

How about the strangest thing you ate?

Rocky Mountain oysters at the Testy Festy in Clinton, Mont. Not only was it the strangest thing I've ever eaten, I've never seen so many people eat so many of them.

Remember those hush puppies at your grade school cafeteria? I think if you deep fry anything enough it's gonna taste good.

Did you go to any famous parties that lived up to their hype?

At the Kentucky Derby, the entire city of Louisville just explodes. It's one big citywide celebration. And I've always heard stories about the Sturgis Motorcycle Rally, but actually seeing the number of gearheads…. It was intense.

Any lessons you gathered the hard way?

Make your hotel reservations early. Or pack a tent. These parties are the biggest in the country for a reason—a lot of people come into town. I had to camp out five or six times.

Check out a goofy-but-effective promotional video for the book, with clips from festivals the author visited.