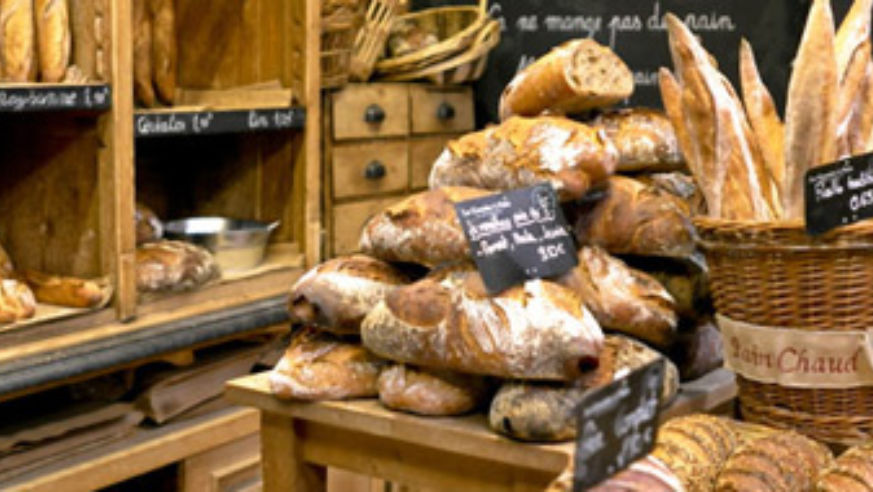 Following on our recent story The Best Baguette in Paris, I had a quick chat with Paris foodie Meg Zimbeck about baguette protocol—because it's France, after all, and I figured there must be rules. Meg's food-related adventures in Paris are posted at megzimbeck.com, and she's the founding editor of Paris by Mouth, a new website about eating and drinking in the city featuring renowned foodies like Clotilde Dusoulier, Alexander Lobrano, and Dorie Greenspan. The website debuts in May.

Steve: So, I've got my baguette. Do I tear it? Is it gauche to cut it in those little slices with a sharp knife, like some people do?

Meg: You know, there's really no protocol here. You can saw it horizontally if you want to have some nice, neat slices, but Parisians also like to handle their bread. Tearing off hunks is perfectly acceptable. If you're eating in a restaurant, it's traditional to place your hunk directly on the table, not the plate.

M: Both! I like to buy a baguette in the evening and eat half of it with the cheese course after dinner. The next morning, I toast the left-over half and slather it with salted butter and jam. The French call this a "tartine" and you can find it served before lunch in most cafés. In general, though, the baguette is a vehicle for whatever delicious, fatty thing you want to spread on it.

S: Salted butter, eh? None of that unsalted stuff for you.

S: How long before I toss the thing away?

M: An authentic baguette has a shelf life of only four hours, so bakeries churn out fresh loaves throughout the day. If your bread becomes stale, you can turn it into morning toast (tartine) or just spring for a new loaf. A good baguette only costs around €1.20, so there's really no reason to be eating stale bread.

S: How do I ask for it, in five French words or less?

M: Une baguette de tradition, s'il vous plaît. The "de tradition" part is important, because a traditional baguette tastes a whole lot better than a regular baguette. It's usually 10-20 centimes more expensive, but totally worth it.

S: I know you love picnics. Every time I talk to you you're on the way to a park with a basket of picnic stuff. So here's your chance: Where do I pick up my baguette, what do I pair with it—and what park in Paris do I end up in?

M: I'm lucky to live near the glorious Parc des Buttes Chaumont in the 19th arrondissement. For a picnic in this park, I score my baguette from the Boulang'Eury at 98 rue de Meaux. It's on a sweet little market street near the park that also has shops selling cheese, fruit, wine and (if I'm really ambitious) roasted chicken. Another favorite outdoor spot is the Canal Saint-Martin in the 10th arrondissement. For a picnic here, I'll stop for bread at Du Pain et des Idées (34 rue Yves Toudic) and a bottle of wine at le Verre Volé ("The Stolen Glass," 67 rue de Lancry).

M: Absolutely! There's only one picnic-worthy place where you can't drink alcohol, and that's the Pont des Arts (a bridge that spans the Seine near the Louvre). A very specific law prohibits the public consumption of alcohol at that bridge between 4 p.m.–7 a.m. between May 1st and October 31st. By the way, if you don't have a corkscrew, most wine shops will be happy to open your bottle and to replace the cork. You can ask "avez-vous un tire-bouchon, s'il vous plaît?" Or do your best with gestures and a smile.

S: Okay, final question: If I tuck it under my arm and mount my bicycle, can I call myself a Parisian?