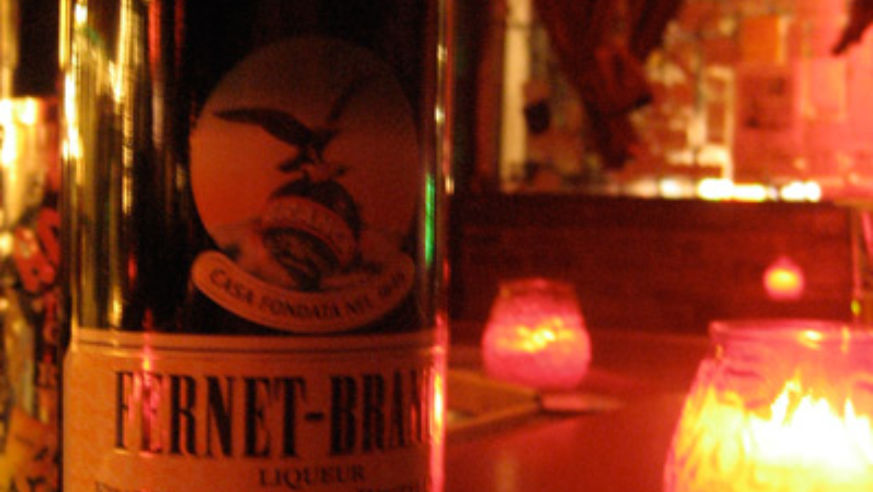 Justine Sharrock
Fernet Branca, out on the town

Maybe you've spottedFernet Branca on a San Francisco bar menu—it's one of the many obscure foodie obsessions of the city. In fact, it's the unofficial drink of San Francisco—particularly among the city's bartenders and young, hip set.

For the uninitiated, Fernet Branca is an Italian aperitif and herbal digestive that has a bitter, black-liquorice flavor. Think of it as a less-sweet version of Jagermeister, but with the same punch—Fernet has a 40 percent alcohol content that can cause quite the hangover when overindulging (but it's also an ideal hair of the dog).

Fernet is an acquired taste; critics go so far as to compare it to Listerine or cough syrup. But here, the aperitif's popularity teeters on cultlike obsession. In fact, 35 percent of the country's Fernet is consumed in San Francisco. That's a lot of alcohol for a city of just over 800,000.

Some prefer Fernet on the rocks, with soda water, or as an ingredient in a cocktail, often as a replacement for bitters. In Argentina, where the liquor is also wildly popular, imbibers mix it with Coca-Cola. But in San Francisco's bars, Fernet is usually sipped straight, sometimes with a ginger-ale chaser.

Fernet gained popularity during Prohibition because its medicinal properties kept it legal. But it's use in mainstream bars exploded back around 2005, when several 1920s-style parties were held at local bars.

To keep up with the demand, two places in Russian Hill have become the first bars in the country to serve Fernet on tap. First was Bullitt (2209 Polk St., 415/268-0140) and more recently, Tonic (2360 Polk Street, 415/771-5535) has jumped on the wagon. It tastes just the same on tap, although bartenders claim that the slight aeration makes Fernet even better.

To get into the spirit (pun intended) head to one of these popular Fernet watering holes:

Haight Street's Hobson's Choice (1601 Haight St, 415/621-5859) specializes in fruit punches, but Fernet is a popular choice regardless, in no small part to bartender Chris "Ferny" Dickerson, a native and Fernet fanatic.