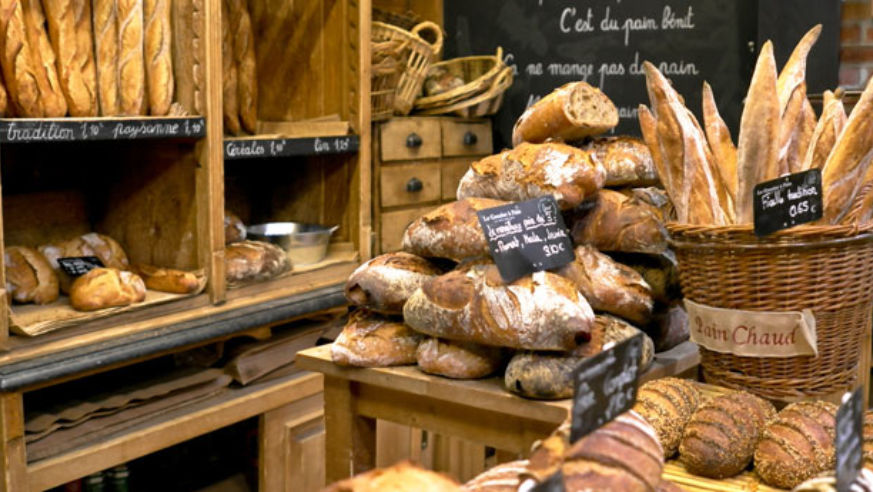 Every year, Parisians anoint one baguette the best in the city. In a country where 99 percent of the population eats bread every day, that's saying something.

Unlike other French icons that have fallen by the wayside—the beret, the cigarette, Brigitte Bardot—the baguette remains a celebrated part of France's national culture.

That's especially true in Paris, the birthplace of the baguette, which hosts an annual competition to identify the city's finest loaf. The Grand Prix de la Meilleure Baguette de Paris (the best baguette in Paris) contest has been making headlines every year since it began in 1993. That's the same year the government passed a law to distinguish an authentic baguette de tradition from the frozen imposters that had become a bane on the city.

How can you tell which is which? Authentic loaves have a deep golden-yellow hue, a crust that smells nutty or grilled, and an interior texture that is elastic and tender, containing holes of uneven size. If your baguette is fluffy and uniform, you've probably been had.

A record number of authentic baguettes were entered into the annual competition on March 22. After ploughing through a pile of 141 loaves and rating each on appearance, aroma, crumb, and taste (no word on the swimsuit part of the competition), the jury handed down the 2010 prize.

Baker Djibril Bodian from Le Grenier à Pain bakery, which placed fourth in the 2007 competition and fifth in 2009, snagged a cash prize of $5,400 (€4,000) and a contract to keep French President Nicolas Sarkozy in bread throughout the coming year. Bodian's baguette, which attracts long lines outside the Montmartre bakery, has a crispy and flavorful crust with hints of roasted hazelnut. Its chewy interior is marked by the irregular holes that are a sign of long and traditional fermentation.

In the 'hood: Climb a few hundred stairs to reach the Sacré-Coeur cathedral, or take a rest while gazing at the nearby "I love you" wall.

>>Baguette Protocol: Is there a best way to eat them? How long do they last? How do you ask for one properly?

Beyond the baguette: Tombarel's pain Allemand is a darker German bread studded with sunflower seeds. The salty-sweet combination of hazelnut, walnut, and raisin in the céréales aux fruits secs is delicious, as well.

In the 'hood: The futuristic Parc André Citroën is far off and makes a nice spot for a Seine-side picnic. For those who are attending a fair or festival, like the Salon International de l'Agriculture, the Paris Expo center is in the same arrondissement.

Beyond the baguette:Don't miss Pouphary's unusual variety of croissants, including noix decoco (coconut) and chocolat lait noisette (milk chocolate and hazelnut). Substantial sandwiches like ham and chèvre on a poppyseed baguette are packaged into a daily lunch special with a drink and dessert for €3.30 ($4.50).

In the 'hood:In the heart of the Latin Quarter, La Parisienne is near the sprawling gardens of the Jardin des Plantes and the mosaic-tiled tearoom of the Paris Mosque. The market street of Mouffetard is just a few minutes away by foot.

Beyond the baguette:The addictive Schwarzbrot (black bread) from this bakery is a standout and is especially nice paired with cheese or salmon. The pavé des près, dotted with flaxseed and sunflower seeds, is a lovely alternative.

In the 'hood: The northern Marais is filled with independent designer shops, especially on rue Charlot. Chocolate junkies should be sure to hit the Jacques Genin boutique and tasting salon—it's directly across the street from the bakery.

Beyond the baguette:The round loaves stuffed with figs and nuts are the perfect accompaniment for cheese. Eury's apple tart, which won third place in the Meilleure Tarte aux Pommes-de d'Ile de France apple tart competition, is a treat nobody should miss.

In the 'hood:This bakery is perfectly situated between two prime picnic spots: the Parc des Buttes Chaumont and the Bassin de la Villette. It's also a short walk from the Parc de la Villette, where you'll find an open-air film festival in July and August.

Beyond the baguette: Colin has picked up a pile of awards for his croissants beurre, or plain butter croissants. The bakery's galette des Rois—a traditional tart with almond frangipane—is arguably the best in the city.

In the 'hood: The Palais Royal, with its secluded interior garden, is just a short stroll away. You can reach this bakery from the Louvre in less than 10 minutes.

Beyond the baguette: This bakery's famous baguette aux céréales is a delicious departure from the traditional white baguette. The whole-grain loaf is decorated with a confetti of seeds—a sort of long and lean "everything" baguette.

In the 'hood: A few doors down from Le Grenier à Pain, this second top bakery in Abbesses allows you to compare and choose your favorite baguette. Alexine is near the spectacular Montmartre cemetery, as well.

Beyond the baguette: Try Delmontel's pure-rye round loaf called tourte auvergnate or his Kougelhopf, a sort of Alsatian coffee cake. You can celebrate the neighborhood by ordering the SoPi (named after the South of Pigalle district): a towering red and black cake erected from chocolate and piment d'Espelette (hot peppers).

In the 'hood: SoPi is a trendy stretch along the rue des Martyrs and includes a good number of boutiques, cafés, and restaurants. It's a great area for exploring on foot and only a 10-minute walk from Montmartre.

Beyond the baguette: Desserts like the Everest—a small mountain of cake topped with bright-red gooseberries—are even more tasty when taken and nibbled at one of the nearby monuments. The pain au levain, or sourdough bread, is a simple but delicious option.

In the 'hood: The Musée d'Orsay is just around the corner, and the Esplanade des Invalides and the Seine River are only a few minutes away by foot.

Beyond the baguette: Racoillet's baguette de tradition is the one that takes home the ribbons, but locals also adore his Picolla baguette. This hand-worked loaf has a denser and chewier crumb than the fluffy traditional baguette. A second location in Montmartre, called simply Coquelicot, features an upstairs dining room where you can pair the baguette with eggs and bacon.

In the 'hood: The prize-winning location in the 9th is just around the corner from the Moulin Rouge.