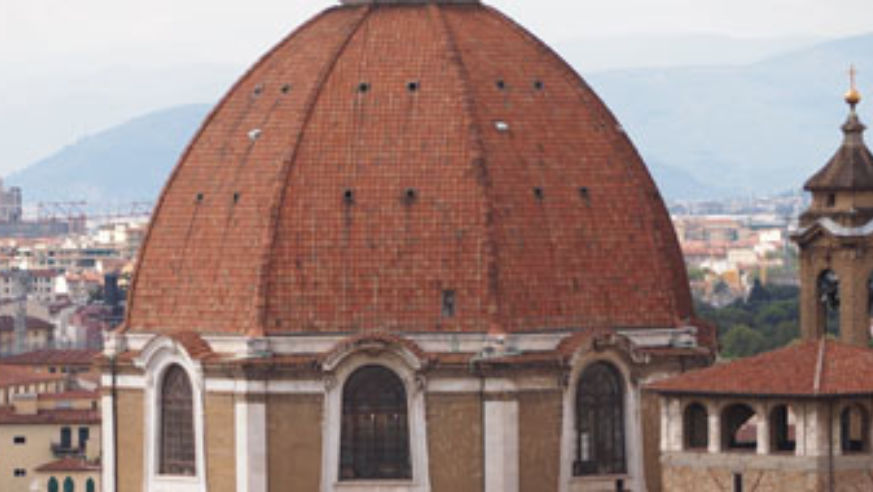 Courtesy Hobart Fowlkes
View from Campanile of Cupola in Florence

Hobart Fowlkes, our "Budget Travel Convert," is a high–end jetsetter by trade, budget globetrotter by choice. He reports regularly on the best (and most affordable) experiences and hotels around the world. Today he updates us on a recent trip to Florence and Tuscany's Versilian Coast.

See photos from my trip to Tuscany.

Before waxing poetic about my trip to Tuscany's Versilian Coast, I must warn readers about renting cars in Italy. I have rented cars in many countries, and I must say that I am still perplexed by what went down at the Hertz Counter at the Pisa Airport on my recent visit to the Tuscan "riviera". I booked my car through Delta so that I would receive miles, and was offered a reasonable price for a new Fiat 500 of 23EUR/day, which seemed reasonable. The total should have been 207EUR, but somehow with all of the extra taxes and fees it came out to something closer to 500EUR. Of course I am well aware of the 20% VAT which exists in all of the EU countries, but I did not expect a 20% Pisa Airport Tax, plus the compulsory base insurance package. Ultimately, my rental car ended up costing me more than almost anything else on the entire trip. (I wish I had read this article before I left: 6 Foreign Car Rental Fees to Watch for on Vacation.)

Arriving in Pisa at midday, I picked up my rental car and made a beeline straight to Florence to meet my friends. We had a rendez-vous at Stazione di Santa Maria Novella, which is easy to find, but traffic patterns in cities built prior to the Middle Ages can sometimes be perplexing, so I spent an unnecessary amount of time driving in circles whilst texting in an effort to find those whom I was meeting.

Where I stayed: I chose a place called "The Old Bridge." The locals call it a "bed & breakfast" but it is not exactly a B&B at all, it is just an apartment owned in the building directly across from the Hotel La Scaletta—a place I stayed once before and found to have very reasonable rates. Via Gicciardini, 22 nero, 011-39/055-265-4262, florenceoldbridge.com

Why I recommend it: The location is great—it is exactly equidistant between the Palazzo Pitti and the Ponte Vecchio. Also, the roof terrace at La Scaletta has awesome views of the city and backs right up against the Boboli Gardens and the Fortezza del Belvedere. When Hotel La Scaletta is fully booked, since it seems to be quite popular, they offer rooms at even better rates at The Old Bridge, which is where I stayed this time around. Each of the six rooms in Old Bridge is perfectly clean and comfortable each with its own bathroom, AC, TV and WiFi. On the down side, you will have to cross the street to go to breakfast at La Scaletta. Otherwise, I was perfectly happy.

Where I ate: Tuscan cuisine is exquisite though somewhat uniform in its content. All over the region no matter where you go, you will be offered a variety of dishes featuring wild boar and porcini mushrooms, and the menu will most definitely include a giant Bistecca alla Fiorentina, which is priced per kilo. I don't believe there is such a thing as a Bistecca alla Fiorentina that weighs less than a kilo, I guess theirs is a region with particularly heavy cattle. Having eaten in a wide range of restaurants, my favorite was Trattoria Quattro Leoni. It is just steps from the Hotel La Scaletta and has one of the coziest atmospheres and best food in all of Florence. Other places to check out are Osteria Santo Spirito which is located directly on Piazza di Santo Spirito. Il Latini is a place loved by both tourists as well as Florentines themselves.

THEN, ON TO THE VERSILIAN COAST…

At the recommendation of some Milanesi friends, we headed straight for a town called Torre del Lago Puccini on the Versilian Coast. The Puccini is tacked on to the end of the name, since it was the birthplace and home of the famous operatic composer, so the town is also known for its annual Puccini Festival. It is also known for its vibrant nightlife (but take note—although the town might wish it could compete with the more popular international destinations such as Ibiza and Mykonos, it can't).

The beaches are nice and entertaining, though crammed with beds and umbrella, which you reserve and pay for as you cross the dune. Never a dull moment, one feels as if one has entered into a Fellini movie in which a range of characters stroll onto and off of the screen randomly...some fighting, some billing and cooing, some wanting to sell you jewelry, others wanting to cover you in henna tattoos, some might want to braid your hair, there is just no telling what might turn the corner next, but it kind of makes you feel like you just plopped yourself into a busy marketplace and that you have to keep a constant eye on your belongings. I guess what I am trying to say in a diplomatic way is that the beaches in Torre del Lago are not at ALL relaxing, but they are extremely entertaining.

Where I stayed: There are several places to stay in Torre del Lago, though I believe we ended up in the most appealing. It is a bed and breakfast called B&B Libano. Libano is the Italian word for Lebanon, so I kind of wondered what the connection was until I met the adorable owner and found that he just happened to be named Libano. Via Tabarro, 23, 011-39/058-435-0322, bedandbreakfast-libano.it

Why I recommend it: I believe that Libano inherited this large house (it can accommodate up to 60 people), which he turned into a beach guest house that caters mainly (though not exclusively) to the Gay and Lesbian crowd—a lot of Torre del Lago's nightlife tends to be somewhat "homocentric." An adorable human being, Libano makes you feel instantly at home upon your arrival. There is an onsite restaurant that serves a sumptuous included brunch daily from 9AM to 1PM, a small gym and AC, TV and WiFi thoughout the house. While I really found Libano and his staff to be very kind and sweet and hospitable, their efforts to try to foster friendships between guests and have evening social hours might seem slightly awkward for some. Mr. Libano takes his evening happy hour so seriously that besides merely providing complimentary olives, nuts, and local wines, he serves massive Italian dishes like Lasagna and Spaghetti alle Vongole. Brunch, happy hour, drinks, the impromptu pasta dishes are ALL included in the price of your room which is very cheap. The only requirement of the guest is to try to remain cheerful and sociable and play along with the vibe of the place.

Where I ate: On our first night in Torre dl Lago we went to the most highly recommended restaurant in town, La Buffalina. It is very nice, but knowing that that was the best that the town had to offer we began to look elsewhere and discovered that the Versilian Coast is actually awesome with tons of great places to see. For example, a 20 minute drive from Torre del Lago will take you to the gorgeous Medieval town of Pietrasanta which for centuries has been the center for marble sculpting in Italy given its proximity to Carrara. The town is beautiful, full of great restaurants and shops, and became our favorite haunt in the evenings. The very best restaurant in town, in my humble opinion, is called Ristorante Filippo. Filippo himself is probably the kindest, most accommodating restaurateur in the entire town of Pietrasanta, and he, too, runs a bed and breakfast directly adjacent to his restaurant called Le Camere di Filippo where I will most definitely stay the next time I find myself in that region.

About 15 more minutes up the coast and you will come to the crown jewel in the Versilian Coast—Forte dei Marmi. This is the spot where all the fashionable Florentines go to see and be seen. There is really nothing to be had in that town for the "budget" traveler, but it is definitely worth taking a look. Built entirely in the 1930s by Mussolini, Forte dei Marmi is a spectacle in many ways should not be missed.

Next stop: Barcelona and the beachtown of Sitges, possibly followed by a short trip back to Tuscany to spend an autumn weekend on the Island of Elba where Napoleon Bonaparte was once sent in exile. "Able was I ere I saw Elba" is the apocryphal palindrome supposedly uttered by the deposed emperor himself. Stay tuned.