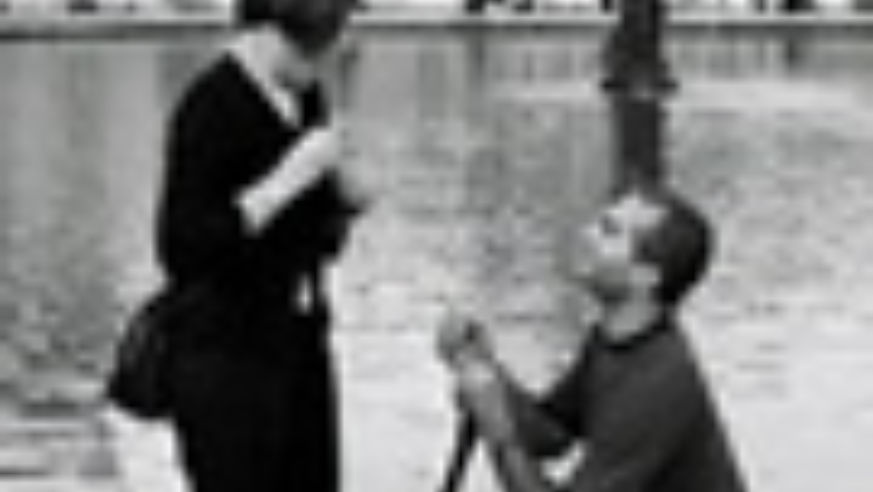 Someone Never Finished Reading The Rules
A few months after I started dating my girlfriend, Sarah, she went on a trip to England. When she got back, she showed me her photos. I didn't know what to say when I saw her standing in front of famous landmarks with a sign that read I Heart Adam. She said it was her way of proving that I was on her mind and that she didn't want to return to Europe without me. We'll be getting married next month and traveling to Italy for our honeymoon--and instead of a sign, she'll have my arm around her in every single picture. Adam Owen, Greensboro, N.C.

Still, No Tip
On our first night in Venice, my husband suggested we take a gondola ride as the sun set. I'm the planner in the family, but it turned out my husband had been doing some planning of his own. He reproposed and gave me a beautiful new diamond ring! It was one of the most romantic moments of my life. We were kissing in a quiet side canal, water lapping gently against the boat, when we heard: "I'm a Barbie girl, in a Barbie world, life in plastic, it's fantastic." Instead of killing the moment, our gondolier's cell phone ring tone made it even more memorable! Lori Hlucky, Brunswick, Ohio

They're Trying to Make Purple
I was taking pictures of the illuminated skyline of Guilin, China, when I noticed a cute girl not too far away. I smiled, she smiled, and then I said, "Hi." She asked if she could practice her English with me, and I, being single, readily agreed. We talked for hours that night and the following day, and before my tour moved on, we exchanged e-mails and promised to write. Once I was home, our e-mails turned to phone calls, then to webcam conversations. There was something special about this girl, and I was back in China in less than four months. By the end of that second trip I was completely love-struck--and engaged. I made a total of five trips to China before her fiancee visa came through; we were married on January 27, 2005. I never expected to go on vacation and come back with a wife. Angel Vigoa, Pomona, Calif.

The Bride Wore Whiteboard
When my husband and I got married, we had already been together for 12 years, so the usual wedding gifts weren't necessary. Instead, we decided on a honeymoon registry for our dream trip to New Zealand. My aunts gave us our camper rental, cousins gave wildlife tours, and my brother gave us a kayak trip in Abel Tasman National Park. While their gifts were certainly helpful financially, the most amazing part was feeling like we were sharing each part of our adventure with someone we loved. So when we returned, each thank-you note included a personalized photograph of us in front of the gift, grinning from ear to ear! Lee Hayes Byron, Sarasota, Fla.

For Your Honeymoon You Get To Go Home
"Wouldn't it be romantic to get married here?" asked a friend while we were sipping espresso in Riomaggiore, Italy. Inspired, my fiancee and I delivered a letter to the mayor. Following his advice, we procured the legal documents, and there was little to do but purchase simple nuptial attire. The night before the wedding, local romantics lavishly adorned the village with flowers and ribbons, and a crowd of supporters escorted us to the ceremony. We were married by the mayor while onlookers shouted congratulations from the balcony above. Rice was thrown with gusto, champagne flowed generously, and a talented photographer documented the entire affair. Michael Metters, Spokane, Wash.

In a Pinch, 10 Percent of Your Income Will Do
During the second week of our honeymoon in Italy, my husband and I rented a motor scooter in Positano. Outside the hill town of Ravello, we parked and walked into the main square--only to find ourselves showered with large red paper hearts falling from the sky. We looked up: A small plane was releasing thousands of the hearts. It was without a doubt the most romantic thing that could possibly happen on a honeymoon. We picked up a heart from the ground and read the message. Roughly translated, it said, "God has granted that the only way to success is through love." Annie Porrino, San Leandro, Calif.

She Should Laugh--In Her Country They Lick Strangers
As we strolled around Luxembourg Gardens in Paris, a girl laughed when my boyfriend asked her to take our picture. I had no idea what was going on! Mike's first language is French, but it was a little rusty. He explained later, he had told her he was going to propose marriage to "ma petite fille" (my little daughter). Even through her laughter, she captured the moment for us. I said yes, and he still calls me his "petite fille." Cassie Gokey, Atlanta, Ga.

My Husband, the Romantic
Six weeks before our 30th anniversary, I was at work. I work at a hotel, so it's not unusual for flowers or centerpieces to be delivered. There was a knock on my door, and a lady walked in with a gorgeous silk floral arrangement. I asked, "Who is it for?" She said "Sheri Karl." I couldn't believe it. The arrangement was in a boat with QE2 on the bow, and included a rolled up scroll, British coasters and teas throughout. In a poem, my husband told me that, for our 30th anniversary, we would be traveling to London, England and then to Southampton to board the QE2 for a six day Trans-Atlantic cruise. We had the most wonderful time, all thanks to my thoughtful and loving husband. Shari Karl, West Lafayette, Ind.