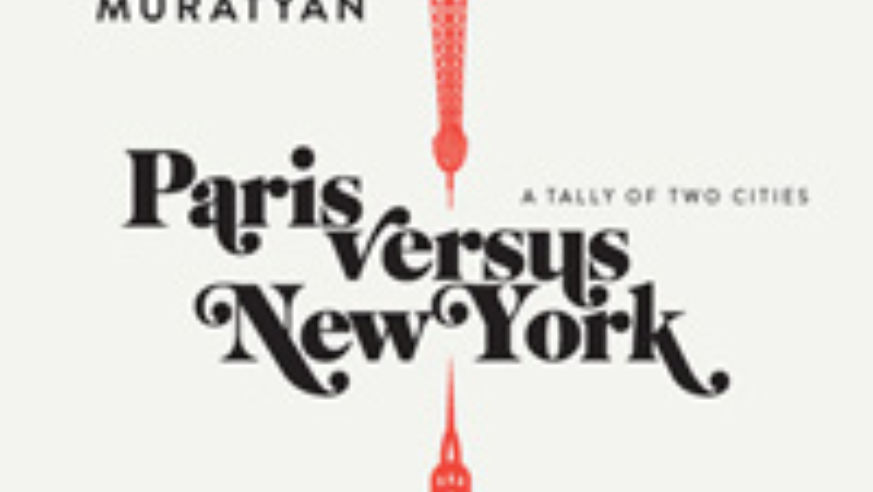 Courtesy of Vahram Muratyan
Even the airports of Paris and New York are compared in Vahram Muratyan's new book, Paris Versus New York: A Tally of Two Cities.

A handful of destinations in the world are so iconic as to be instantly identifiable by a single, simple image—say, the looming triangle of an Egyptian pyramid, San Francisco's Golden Gate Bridge, the Space Needle (or perhaps the Starbucks logo) of Seattle.

In his new book Paris Versus New York: A Tally of Two Cities, out next month from Penguin Books, Paris–based graphic designer Vahram Muratyan delivers more than 100 diptychs representing elements of the two title cities, a compilation of side–by–side symbols created during a stint in New York City and published over the course of about a year on Muratyan's blog.

Between its covers, you'll find an outline of a baguette(avec beurre demi-sel) staring down a bagel (with cream cheese); renderings of the steel–and–glass dome of the Grand Palais and the constellation–strewn ceiling of Grand Central station; and a battle royale between a stack of macarons and a sprinkles–topped cupcake.

The duos go way beyond comparing apples to apples (Big or otherwise); there's also a hefty dose of cultural commentary in the mix. Paris's winter page (hiver) is subtitled: "Cinc centimeters et c'est le panique." (Roughly: Two inches of snow and it's chaos.) New York's "Go" page, which depicts a cluster of joggers (all sporting Apple–white earbuds), counterbalances Paris's "Pause," wherein a trio of ladies stand obscured by a cloud of their own cigarette smoke. Architecture, fashion icons, modes of transportation, snack foods, tourist traps, singers, artists, neighborhoods, cocktails, and coffees all get their due. Even vermin appear—although New York has the dubious distinction of claiming both rats ("pigeons without wings") and pigeons ("flying rats").

And of course, it wouldn't be an icon smackdown without these two: The Eiffel Tower and the Statue of Liberty, both of which were designed by Frenchmen. (Do we detect a bias here?) The whole project has me inspired to rethink my own travel journals—to find ways to say more with less, to observe more sharply, and to always remember the small details that make the big picture. It's also inspired me to peruse the Paris Versus New York page on the Society6 online art shop, where 25 of Muryatan's pairings are available as frame–ready prints or stretched canvases (prices start at $24 for an 8" x 10"). Unfortunately, the book itself doesn't hit store shelves until the end of January, but you can pre–order it now on Amazon.