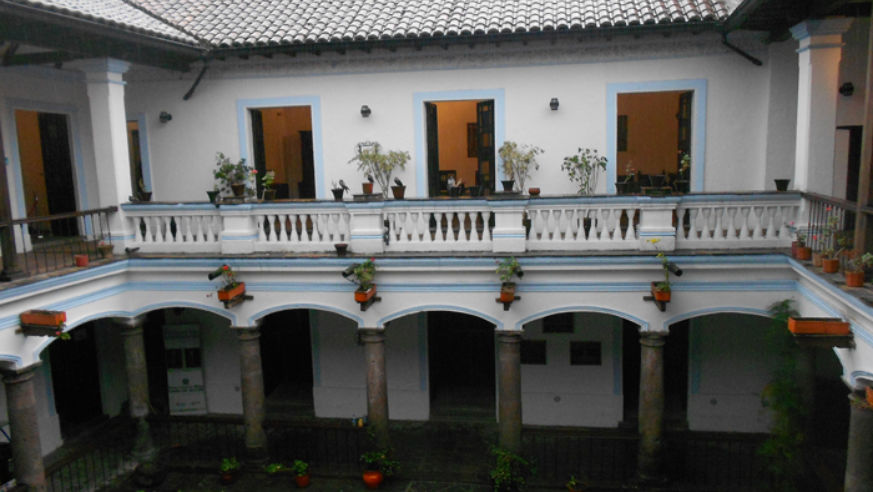 This article was written by Mike Gasparovic, a freelance writer, editor, and translator. He devotes his free time to studying the history, art, and literature of the Spanish-speaking world and learning about its people. He currently lives in Lima, and wrote this article for South American Vacations, providers of tours to Ecuador and South America.

Quito today has a reputation for being one of the most orderly and peaceful of South American capitals, but it hasn't always been so. In the early 1800s, the city was a hotbed of revolutionary activity, a flash point whose intellectual and political crosscurrents eventually gave rise to one of the first violent insurrections against Spanish colonial rule. Today it's still possible to visit the houses in Quito's Old Town, most of which date from the 18th century. Stepping inside their whitewashed adobe walls, travelers are able to turn back the clock to the formative years of Latin America, when the nations we know today were born. Here are two historical houses you should visit next time you're in Quito.

Antonio José de Sucre was the trusted commandant of the revolutionary leader Simón Bolívar. His name is blazoned on seemingly every street corner in Quito, principally for his role in the battle of Pichincha, which took place in 1822 on the slopes of the volcano that overlooks the city, and which effectively brought about the liberation of what would later become Ecuador. Sucre would go on to achieve an even greater victory in the battle of Ayacucho in Peru, which brought to a close the wars of independence in Latin America, before being assassinated on a dark mountain deep in the forests of Colombia.

Sucre's life wasn't all heroics. In 1828, longing for peace after so many years of fighting, he married Mariana Carcelen, Marquise of Solander, and moved into this house in downtown Quito, which she had inherited from her family. The couple enjoyed a brief interval of domestic bliss, 15 short months, long enough for Mariana to give birth to a daughter. Then Sucre was called away to quell a series of political troubles in Bogotá. He never returned.

Today, visitors to this lovely museum can see the living quarters, kitchen, stables, and salons where the Marshal of Ayacucho made his home. Tours are available in both English and Spanish, after which you are left free to wander. The effect is both monumental and strangely intimate: full-size mounted portraits grace the gallery upstairs, while the Mariscal's guitar still hangs on the bedroom wall.

Manuela Sáenz, Simón Bolívar's mistress, never lived in this 18th-century house in Quito's San Marcos neighborhood. She in all likelihood never even entered it (though evidence indicates that as a child, she did board at the Santa Catalina Convent across the street). Yet this fascinating museum is a must-see, for it's here that Sáenz has found her champion, a scholar whose passion and spirit rival her own. That scholar is Ana María Álvarez, and she has dedicated herself not only to her investigations of Sáenz's life, but also to educating the public about history's most famous Quiteña.

After her father, Carlos Álvarez Sáa, an industrialist and amateur historian, acquired and refurbished this house in the 1980s, Álvarez inherited from him his love for "La Libertadora del Libertador" (so-called for reportedly saving Bolívar's life during three separate assassination attempts). She thus elected to spend her days clearing away the myths surrounding her subject and claiming for Sáenz her rightful place in Latin American history. The figure that emerges, during the hour-long tour of the museum, is that of a complex, driven woman, a revolutionary conspirator, spy, and proto-feminist who loved independence as fiercely as she did the man who fought to realize it in South America.

The museum houses numerous objects that once belonged to Sáenz and Bolívar: letters, portraits, furniture, firearms. Through them, we're able to follow the trajectory of La Caballeresa del Sol (Dame of the Sun), from her seduction at age 17 by a Spanish army officer, to her participation in the conspiracy against the Peruvian viceroy in 1820, to her first meeting with Bolívar in Quito, where she wove a crown of flowers for the revolutionary hero and threw it from a balcony as his cortege passed below. The tour also features a biographical video that recounts Saenz's final days, first as an exile in Jamaica and later as a destitute widow in the coastal town of Paita, Peru, where she died of diphtheria and was buried in a mass grave. What makes all of this come alive, however, is Álvarez's great gifts as a storyteller. Visiting the house, we feel that it really is hers, Manuela's—that after so many journeys, her spirit has at last found its proper home.