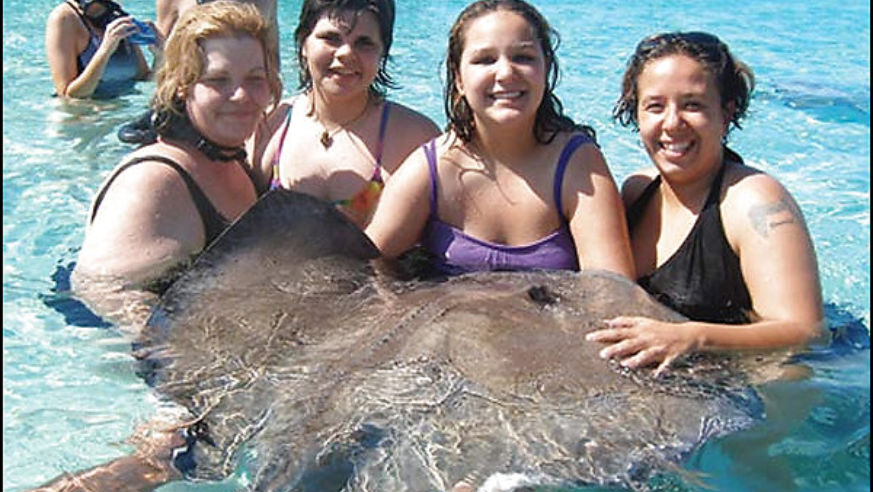 The group at Stingray City

On our cruise, we don't want to do anything we can do at home in Florida

Wendy Crawford: A corrections officer in a county jail, she's looking forward to doing 'things together with my daughter, as well as having time apart.'

Karen McCleery: "I want to be treated like a queen for the week," says Karen, a nurse at a mental-health facility. "No beds to make, no dinners to cook, no dishes to wash!"

Leticia Crawford: Wendy's daughter, 13, likes to hang out with her friends and watch Prison Break with her mom. "I guess you can say it's an appropriate show for us to watch, since my mom works at the county jail!" she says.

Nicole McCleery: Karen's daughter, 14, and Leticia became friends as Girl Scouts. Nicole plays softball, and like Leticia, is a member of the school marching band.

Where they're going and why

Wendy and Karen became friends five years ago, after their daughters joined the same Girl Scout troop in Port Charlotte, Fla. When the foursome went on a Girl Scout trip to Key West, they realized they were good travel companions.

Now that Leticia and Nicole are teenagers, they all sought a vacation that gave the girls some independence--while giving the single moms a chance to relax. While none of them has been on a cruise, everyone likes the idea of having a safe, semi-independent environment for the girls, with plenty of activities on the ship and in port. The women eagerly signed up when the office where Wendy works organized a sailing in the Western Caribbean.

How can we help?

First-time jitters: "None of us really know what to expect on a cruise," says Wendy. "We'd appreciate any tips to make the most of our trip."

Seasickness: "I'm concerned about it," says Karen. "A friend of mine got seasick on a ship once."

The right excursions: "On our cruise, we don't want to do anything we can do at home in Florida," says Wendy. That means they'll pass on hanging out at the beach. Instead, the foursome wants history, culture, and adventure. But which of the cruise excursions are worth the money?

Packing: "What kind of clothes should we bring?" asks Nicole. She's particularly concerned about the two formal dinners, because she's not into wearing dresses.

Making friends: Leticia, who likes to go to dances, is curious about the ship's teen program.

Because they're single moms, Wendy and Karen should complete a notarized form stating that each child's father knows she is being taken out of the country. In order to curb possible kidnappings by parents, border authorities are extra cautious about children traveling with one parent.

Ships like the Miracle are so big and stable that it's unlikely anybody will get seasick. To play it safe, we recommend a trip to the drugstore to pick up Bonine and Dramamine, as well as Sea-bands--wristbands that cost around $10 and combat seasickness by pushing on pressure points. What's great about the latter is that there are no side effects (Dramamine can cause drowsiness).

After check-in at the cruise port in Tampa, luggage is taken away, to be delivered to the cabins around dinnertime. We make sure the women hold on to anything they might want during the interim (such as their swimsuits, so they can hang out by the pool).

Casual clothing like sneakers and T-shirts is fine for breakfast, lunch, and most activities, though shorts, jeans, and sneakers aren't allowed during the sit-down formal dinner. There's no need to wear a dress to the formal dinners, though; dressy black pants and a nice top will do. Or the women could opt for the casual, no-reservations buffet, where shorts and flip-flops are always fine.

On board the ship

A roster of activities--such as trivia contests, variety shows, piano sing-alongs, comedian performances, even men's hairy-chest competitions--is distributed every morning. The activities are all free, though it's always a good idea to arrive 20 minutes early to get seats. "I think the towel-folding and other demonstrations sound interesting," says Karen.

Nicole, who aspires to be a chef, should look out for the food-oriented presentations, including the programs in which passengers make their own pizza and ice cream. "Cool," she says. "We can eat our creations!"

There'll probably be plenty of other kids to hang out with; more children and teens sail on Carnival ships than on any other cruise line. The ship's Club 02 teen program hosts nightly dances as well as waterslide races, scavenger hunts, and other games. Because teens tend to make friends and form groups quickly, we urge the girls to join the group soon after boarding. Many teen activities last until the wee hours of the night, so the mothers will want to discuss curfews beforehand.

Cruises are cashless environments: Everything passengers buy is charged directly to their accounts by way of a stateroom key card. The moms aren't sure if they should allow Nicole and Leticia charging privileges. If they do, we strongly advise ground rules, perhaps telling the girls they're limited to a certain amount each day. Karen and Wendy can periodically ask for a printout of their accounts.

Exploring independently often costs less than organized ship excursions. In Grand Cayman, the foursome can take a walk to George Town for upscale boutiques. In Cozumel, there are good jewelry stores in a huge building right by the pier. Haggling is a must.

As for organized day trips, a tubing adventure through caves in Belize costs $79 through Carnival. There's no requirement to book excursions through the ship, though. Belize Cruise Shore Excursions, an independent tour group, sells a slightly shorter version for $60 (belizecruiseexcursions.com). "That leaves us time for shopping," says Wendy.

Of the ship's excursions, a few stand out as likely favorites. The Stingray City trip in Grand Cayman ($74) includes a tour of the island and the chance to get in the water with actual rays. In Mexico, they might prefer the Chacchoben Mayan Ruins program ($69), which visits impressive pyramids in a secluded jungle, to the Tulúm trip ($79). The group is most fascinated by an all-day, Mayan Jungle Explorer tour ($109) with biking, snorkeling, and zip lining. "What a day that'll be!" exclaims Wendy. Bon voyage!

Just some of the answers that experts have given during weekly chats at our website, BudgetTravelOnline.com . . .

Costa Rica: "Forget the malaria concerns. You have a much better chance of being eaten by a polar bear." -- Rob Hodel, cofounder of Tico Travel

Mount Kilimanjaro: "Find yourself a lunar calendar and plan to hit the summit on or around full moon. You'll not regret it." -- 2Afrika president Kenneth R. Hieber

Las Vegas: "Pirates can serve as the ring bearers and even give the bride away." -- John Bigley and Paris Permenter, authors of The Destination Wedding Workbook, on getting married at Treasure Island

Cell Phones: "Your standard Verizon phone is a paperweight overseas." -- Ken Grunski, CEO of Telestial, on the limitations of some U.S.-based cell phones in Ireland

"I like to buy things native to the area," says Wendy. "At some of the souvenir shops, there was stuff made in the U.S. Why would I want that?" Instead, she purchased a stone Mayan calendar and Mexican blanket at a market near the Chacchoben Ruins in Costa Maya, as well as an elephant figurine while in Belize. "The blanket is draped across our couch right now," she says.

Was the food delicious?

"Food was available 24/7, and I loved absolutely every minute of it," says Karen. "The highlight was the Chocolate Buffet, when they set up an area with chocolate cakes, ice-cream sundaes, pudding, mousse, pie--you name it." Wendy couldn't agree more: "I'm kind of loud and kept on saying, 'Oh my God! Oh my God! Where do I start?' The crew was laughing at what a kick I was getting out of the whole setup."

Hands down, Mayan Jungle Explorer was the women's favorite excursion. Wendy paid extra to get a video of the zip lining because she "didn't think people would believe" her otherwise. "The one problem we had was that if Carnival said the excursions would take four hours, it actually wound up being more like six once you added in travel time and waiting for other passengers," says Wendy. "As a result, we didn't have time for much shopping. I complained about it to Carnival." Because the other excursions ate up so much of their time, the group decided to skip any organized activities in Belize. "We wandered around and found some markets," says Wendy. "It felt good exploring on our own. The girls got their hair braided."

"We had an absolute blast!" says Wendy. "The staff was wonderful. Whenever we came back to our room, everything was tidied up and towels were magically refolded. I grew so used to things that on the day we got home, I told Leticia that we should just call room service for dinner."

Would you do anything differently?

"It was a very busy week," says Karen. "I wouldn't have minded staying in a port for a few days to relax."

Did the girls have fun?

"There was so much to do on the ship that you never saw kids bored," says Wendy. "The girls loved that they had all that freedom, and I loved that there was no place they could get into trouble. They went to the dances, and days would pass by when we only saw each other during the meals."

As a memento, we sent the group Carnival's book showing how to fold towels into cute animals and shapes.