Wikipedia
Lexington is the county seat of Davidson County, North Carolina, United States. As of the 2010 census, the city had a population of 18,931. It is located in central North Carolina, 20 miles (32 km) south of Winston-Salem. Major highways include I-85, I-85B, U.S. Route 29, U.S. Route 70, U.S. Route 52 (soon to be I-285) and U.S. Route 64. Lexington is part of the Piedmont Triad region of the state. Lexington, Thomasville, and the rural areas surrounding them are slowly developing as residential bedroom communities for nearby cities such as Winston-Salem, Greensboro, High Point and, to a lesser extent, Charlotte and its northeastern suburbs. 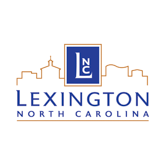 Thomasville is a city in Davidson County, North Carolina, United States. The population was 26,757 at the 2010 census. The city was once notable for its furniture industry, as were its neighbors High Point and Lexington. This Piedmont Triad community was established in 1852 and hosts the state's oldest festival, "Everybody's Day". Built around the local railway system, Thomasville is home to the oldest railroad depot in the state, just a few hundred feet from the city's most notable landmark, "The Big Chair".

Salisbury is a city in the Piedmont region of North Carolina; it has been the county seat of Rowan County since 1753 when Rowan County was much larger and its territory extended to the Mississippi River. Located 44 miles (71 km) northeast of Charlotte and within its metropolitan area, the town has attracted a growing population, which was 33,663 in the 2010 Census – 27.8 percent greater than 2000. Salisbury is the oldest continually populated colonial town in the western region of North Carolina. Salisbury is noted for its historic preservation, with five Local Historic Districts and ten National Register Historic Districts. Soft drink producer Cheerwine and regional supermarket Food Lion are located in Salisbury and Rack Room Shoes was founded there.

High Point is a city in the Piedmont Triad region of the U.S. state of North Carolina. Most of the city is in Guilford County, with parts extending into Randolph, Davidson, and Forsyth counties. High Point is North Carolina's only city that extends into four counties. As of the 2010 census the city had a total population of 104,371, with an estimated population of 117,624 in 2020. High Point is the ninth-largest municipality in North Carolina, and the 259th-largest city in the U.S.. Major industries in High Point include furniture, textiles, and bus manufacturing. The city's official slogan is "North Carolina's International City" due to the semi-annual High Point Furniture Market that attracts 100,000 exhibitors and buyers from around the world. It is home to High Point University, a private Methodist-affiliated institution founded in 1924.

Winston-Salem is a city in and the county seat of Forsyth County, North Carolina, United States. In 2020, the population was 249,545 making it the second largest municipality in the Piedmont Triad region, the fifth most populous city in North Carolina, the third largest urban area in North Carolina, and the 89th most populous city in the United States. With a metropolitan population of 679,948 it is the fourth largest metropolitan area in North Carolina. Winston-Salem is home to the tallest office building in the region, 100 North Main Street, formerly known as the Wachovia Building and now known locally as the Wells Fargo Center. In 2003, the Greensboro-Winston-Salem-High Point metropolitan statistical area was redefined by the U.S. Office of Management and Budget. The region was separated into two major metropolitan areas of Winston-Salem and Greensboro-High Point. The population of the Winston-Salem metropolitan area in 2020 was 679,948. The metro area covers over 2,000 square miles and spans over the five counties of Forsyth, Davidson, Stokes, Davie, and Yadkin. Winston-Salem is called the "Twin City" for its dual heritage. "Camel City" is a reference to the city's historic involvement in the tobacco industry related to locally based R. J. Reynolds Tobacco Company's Camel cigarettes. Many natives of the city and North Carolina refer to the city as "Winston" in informal speech. Winston-Salem is also home to six colleges and institutions, most notably Wake Forest University, Winston-Salem State University, and the University of North Carolina School of the Arts which ranks as one the best film schools in America. In 2021, the city ranked No. 46 out of 150 cities on the "Best Places to Live" list from U.S. News & World Report. In April 2021, a study from Lendingtree's Magnify Money blog ranked Winston-Salem as the second-best tech market for women.