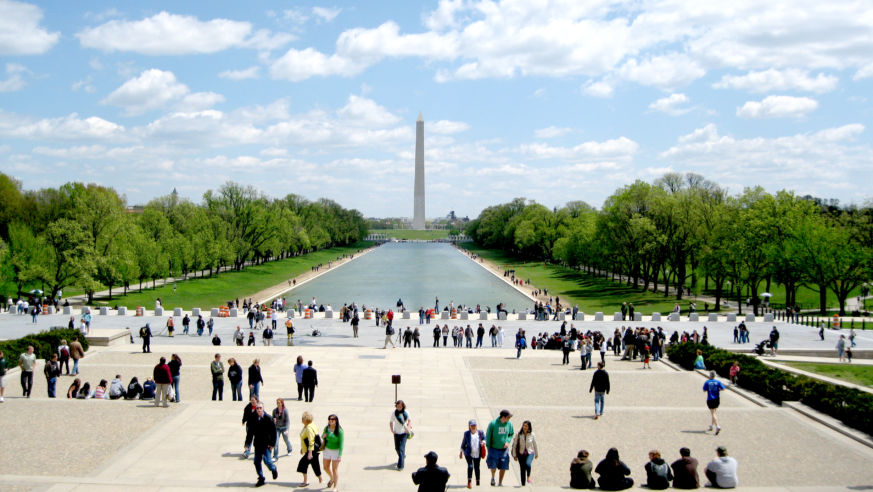 It took us hours of heated debate, weeks of research, and years of experience to whittle down America's monuments to a definitive list of 15 musts for anyone under 15. Not only are these attractions fun and (shhhh) educational, they're especially magical through the eyes of a child.

Two years ago, we picked 15 American landmarks every kid should see, from Ellis Island to Redwood National Park. Our new and improved 2011 lineup takes that challenge even further, by highlighting how our country's top sights cater to kids' abbreviated attention spans. From roasting marshmallows around a campfire to playing dress-up at Monticello, these cool, interactive activities ensure that the younger set will enjoy these must-see spots as much as their parents do.

Grand Canyon (Ariz.): During the day, stroll the 4-year-old Skywalk, a U-shaped, glass-bottom observation deck that juts 70 feet over the canyon's West Rim and sits 4,000 feet above the Colorado River. Come sunset, hit Grand Canyon Apache Stables, where, for $25.50 per person, you can hitch a one-hour ride on a horse-drawn wagon that ends around a campfire. Tip: BYO marshmallows and hot dogs so you can cook up a nighttime snack. Skywalk Package including mandatory Legacy pass. Kids 3–11, $57.49; Adults, $73. grandcanyonskywalk.com Grand Canyon Apache Stables: $25.50, kids 8 and up, apachestables.com/rides

Monticello (Va.): The dreaded "look but don't touch" rule means nothing at the Griffin Discovery Room, which opened on the grounds of Thomas Jefferson's Monticello estate in 2009. Nothing is off-limits in the space, which features replicas of the third president's possessions, from his alcove bed to his polygraph machine. Even his closet is fair game: Kids can try on clothes modeled after his 18th-century wardrobe. The Griffin Discovery Room is part of Monticello's House and Grounds tour. Adults, $17 (low season), $22 (high season); Kids 6-11, $8 (year-round).monticello.org

The Freedom Trail (Mass.): Who needs a social studies book when you can learn about Colonial history from an 18th-century ship captain while parading around Boston's waterfront? The 90-minute Pirates and Patriots tour, led by an actor in 1770s naval garb, focuses on maritime history and introduces the scrappy, ship-raiding characters that inhabited the city's North End during the Revolutionary era. Stops include the aptly named Long Wharf, once the longest in the world and the epicenter of Boston's colonial shipping industry, and Griffin's Wharf, site of the 1773 Boston Tea Party. Bonus: Some tour guides are known to hand out vintage goodies, so you might walk away with a fistful of colonial money or musket balls. Browse our favorite budget hotels in Boston. The Freedom Trail's Pirates & Patriots Tour runs from June to Nov. Adults, $12; kids 6–12, $7. thefreedomtrail.org

Niagara Falls (N.Y.): Sure, your grandparents honeymooned there, but the majestic waterfalls straddling the U.S.-Canada border are worth a 21st-century trip. Ever wonder what it's like to be a rubber ducky in a massive bathtub? Sign up for the Cave of the Winds tour, which begins after you change into a complimentary yellow poncho and sandals (trust us, you'll need 'em). After riding an elevator 175 feet down into the Niagara Gorge, you'll stand on the Hurricane Deck, where you'll be drenched by the tropical-storm-like spray from the 181-foot Bridal Veil Falls, where the water falls at a rate of up to 68 mph.  Cave of the Winds operates May 1–Oct. 25. Adults, $11; kids 6–12, $8; 5 and under, free. niagarafallsstatepark.com

The National Mall (D.C.): Riding the streets of Washington, D.C., in a boat on wheels might sound cheesy, but cruising the Potomac River in one is pretty sweet. Set in a WWII-era amphibious vehicle, the 90-minute D.C. duck tour covers both land and sea. The first leg hits the history-packed National Mall—look for the 19-foot-tall Lincoln Memorial, the Capitol building, and the Smithsonian museums—and then switches to a scenic river trip. Highlight: The boat pauses at Gravelly Point, a park located just a few hundred feet from the runway at D.C.'s Reagan National Airport, so you can watch roaring planes take off and land. Browse our favorite budget hotels inWashington D.C.D.C. tuck tours cost$31.50 for adults, and $16.20 for kids 11 and under. trustedtours.com

Colonial Williamsburg (Va.): Everyone in this living-history site likes to play dress-up, and visitors are no exception. At the Great Hopes Plantation—a re-creation of the town's original 1700s farm—a stash of old-timey accessories await, from tricorne (three-pointed) hats for boys and shifts and mop caps (bonnets) for girls. The costumes come in handy in the field, where kids can perform 18th-century household chores, such as picking bugs off potato crops, fetching water from the well, or hoeing the soil, that are likely to make clearing the dinner dishes seem like a breeze by comparison. Great Hopes Plantation can be accessed through regular admission tickets. Spring prices: adults, $37.95; kids 6–17, $18.95; 5 and under, free. history.org

Walt Disney World Resort (Fla.): Taking a family vacation to the world's largest, most popular theme park is a no-brainer, and just-opened exhibits give even more reasons to visit Mickey & Co. Our pick: the Wild Africa Trek, a private, three-hour safari featuring live Nile crocs, statuesque giraffes, and lazy hippos. Strap into a harness and you can even dangle 10 feet above the crocodiles' heads. (The attraction is open to kids 8 and up.) Mid-jungle trek, the safari car (imagine an open-air Jeep that allows for standing) will stop on the trail for a traditional African lunch. Wild Africa Treks begin at $189 per person, including lunch, but not including admission to Disney's Animal Kingdom. disneyworld.disney.go.com

Independence Hall (Penn.): Acquaint yourself with the spirits of America's founding fathers on Philadelphia's Ghost Tour, a 90-minute, candle-lit stroll that winds past landmarks like Independence Hall, where the Constitution was adopted; the Powel House, which hosted George and Martha Washington's 20th wedding anniversary celebration; and the 238-year-old City Tavern, John Adams's former watering hole. A cape-wearing, lantern-carrying guide points out "haunted" graveyards (St. Peter's Cemetery) and reports sightings of Benjamin Franklin, who's said to roam the city's streets. The best part: All the ghost stories are based on documented accounts, which makes them all the more spooky. Ghost Tour of Philadelphia, adults, $17; kids 4 and up, $8. ghosttour.com

Alcatraz Island (Calif.): Shiv collections and cramped jail cells don't exactly sound kid-friendly, but they offer a glimpse into America's most notorious island prison—and the National Park Service is all for bringing younger ones for a visit. Hop a ferry from San Francisco's Pier 33 and stroll the damp, gray halls of the maximum-security pen, which housed criminals like Al Capone and George "Machine Gun" Kelly from 1934 to 1963. (You can even get behind bars in one of the cells, if you dare.) Don't miss the audio tour, which was updated in 2007 when former inmates and guards recorded their memories of doing time at "the Rock." If you're feeling brave, take the night tour, which lets you roam the prison after dark. Browse our favorite budget hotels in San Francisco.Alcatraz Cruises is the official carrier for tours to Alcatraz Island. Adults 12–61, $26; kids 5–11, $16, 4 and under, free.alcatrazcruises.com

Ellis Island (N.Y.): Between 1892 and 1924, more than 17 million immigrants passed through Ellis Island; today, their descendants account for 40 percent of Americans. Go on a hunt for your ancestors at the Ellis Island Immigration Museum, where for $5 you can search through millions of records to find the exact date your relatives sailed into the Port of New York, as well as which ship they were on and whether they traveled with other family members. (Bonus: copies of the documents are yours to keep.) And don't miss the construction of the Peopling of America Center, which cost $20 million to build and is slated to open in 2012. The new space focuses on U.S. immigration from 1955 (when Ellis Island closed) to the present, and houses interactive multimedia exhibits, like a touch screen that reflects demographic changes in American cities over time.  Browse our favorite budget hotels in New York City.  Ellis Island admission prices as of March 18: adults, $37.95; children, $18.95; children under 5, free. ellisisland.org

Yellowstone National Park (Wyo., Mont., and Idaho): Snag a Young Scientist Toolkit stocked with magnifying glasses, rock samples, and stopwatches to time geyser eruptions at the Old Faithful Visitor Center and hit the great outdoors for some investigating. The coolest toy: an infrared-thermometer gun that takes readings of thermal pools when pointed at the water. And there's lots of H20: The 3,472-square-mile park is home to more geothermal features (geysers, hot springs, mud spots) than any place on earth. TheYoung Scientist activity booklet and toolkit costs $5 (toolkit must be returned after use). Park entrance fee starts at $12.nps.gov

Fenway Park (Mass.): Even die-hard Yankees fans have to admit that visiting Major League Baseball's oldest stadium is an exercise in Americanism: Babe Ruth pitched there! Ted Williams hit a 502-foot home run! Fenway turns 100 next year, but its features are still intact. Check them out for yourself on a guided 50-minute tour, where hands-on exploration is encouraged: You can touch the Green Monster (the park's 37-foot-tall left-field wall), peek into the dugout, poke around inside the press box, and even walk across the baseball diamond, depending on how friendly the grounds crew is feeling that day. Browse our favorite budget hotels in Boston. Fenway Park tours, adults, $12; kids 3–15, $10; seniors, $11. mlb.mlb.com

Craters of the Moon National Monument & Preserve (Idaho): The National Park Service calls this Idaho preserve "the only officially weird park" in the country. And for good reason: The jagged, black landscape—formed by volcanic eruptions up to 15,000 years ago—boasts a 618-square-mile lava field, the biggest in the U.S. (The rocky surface is so moonlike that Apollo 14 astronauts trained at the site in 1969.) The park's most awe-inspiring feature is its lava tubes, underground passageways created by hardened molten rock. Grab a flashlight and head to Indian Tunnel, which, at 30 feet high and 50 feet wide, allows for comfortable exploring. Craving an even more intense experience? Exit the cave at the far end, a feat that requires mounting a big rock pile and squeezing through a small opening. Park entrance fee is $8 per vehicle; bike or foot entrance starts at $4; age 14 below is free. nps.gov

San Diego Zoo (Calif): With more than 4,000 rare and endangered animals representing 800-plus species and subspecies, the San Diego Zoo is one of the most diverse in America. But its coolest attraction—literally—is the Polar Bear Plunge, which reopened last March after a $1 million makeover. Aside from permanent polar residents Kalluk, Chinook, and Tatqiq, new features include a snow den you can burrow into (the snug space mimics where female bears birth their cubs); a helicopter used on actual Arctic explorations that invites climbers into the cockpit; and the Experience Wall, where zookeepers open the glass panels surrounding the bears' habitat, letting them sniff at visitors through wire mesh. Ages 12 and up, $40; 3–11, $30. sandiegozoo.org

Top 10 Most Travel Inspiring Movies of the Year

11 Places You Want to Be Right Now