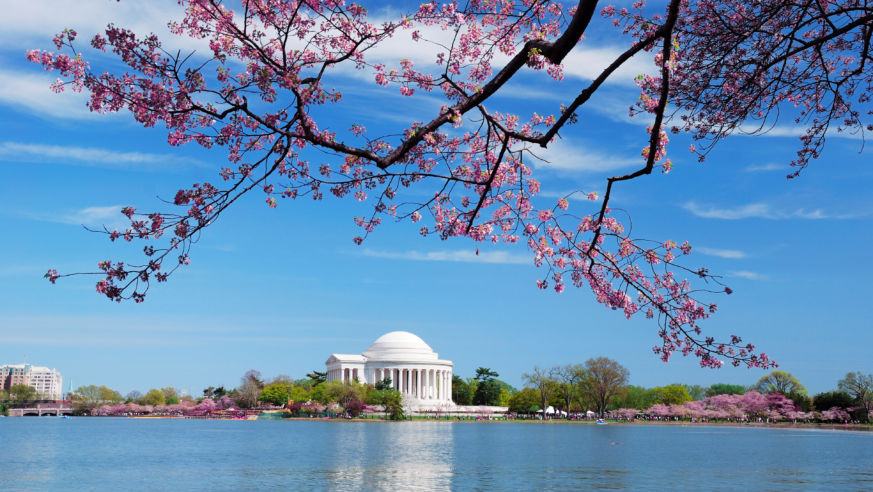 Let freedom ring! Did you know that amid the trappings of office, pomp and ceremony, and glitz and glamor of Washington, D.C., you’ll find more high-quality freebies than anywhere else on earth? Who’s ready to binge on cherry blossoms, food, art, dinosaurs, astronauts—and a 45-carat diamond? Here’s how!

After a long winter, these beautiful blooms make April the coolest month

The gorgeous tableau of Washington decked out in its spring finery—thanks to its countless cherry trees in bloom—could melt the heart of the coldest-hearted politician. The trees were given to Washington in 1912 by the city of Tokyo and attract about a half-million visitors each spring to blossom hotspots like the Tidal Basin. The National Cherry Blossom Festival traditionally runs through mid-April, with a grand parade this year on Saturday April 12 from 10 a.m. to noon. But your best bet for viewing the trees crowd-free is to hit the Mall before dawn to catch the blossoms as they're caressed by the dawn's early light.

Not just a history lesson in marble, but an emotionally charged work of art

Prepare to be surprised by the Lincoln Memorial. Most visitors find it unexpectedly moving, and the sculpture of Lincoln himself, by American master Daniel Chester French, is much more than a monumental work of public art. The 19-foot marble statue of the 16th president draws viewers deep into the thoughts and feelings of the president who led our nation through the conflict that nearly destroyed it and still manages to define it. This is not just a check on your must-see list. Reserve at least a half-hour to read Lincoln's immortal words, see the sculpture from different angles, and reflect on what has and has not changed in the 150 years since his presidency.

Where: 6th Street and Constitution Avenue

The National Gallery of Art opened in 1937 and continues to hold its own even with such famous neighbors as the Capitol and the Washington Monument. Its extensive collection of Italian Renaissance masterpieces and works by Impressionists and early 20th-century painters is worth a stop. Don't miss Leonardo da Vinci's Ginevra de'Benci (the only da Vinci painting in the U.S.), Johannes Vermeer's A Lady Writing a Letter, and Paul Gaugin's Self Portrait.

4. NATIONAL MUSEUM OF THE AMERICAN INDIAN

Think you know the history of Native America? Think again

Where: 4th Street and Independence Avenue

Art, culture, history, and even food come alive at this exceptional museum, part of the Smithsonian Institution. With hands-on programs for families and a mix of permanent and temporary exhibitions, this is the definitive place to learn the true story of America's native peoples, from the earliest times to the present day. The museum's distinctive Mitsitam Native Foods Café is unlike any other D.C. restaurant, serving fry bread, buffalo, and other Native American classics.

From serious history to classic TV props, America's attic has something for everyone

Where: 14th Street and Constitution Avenue

Here, you'll find countless artifacts from the nation's history, ranging in gravitas from battle-scarred flags to the inaugural gowns of First Ladies to Archie Bunker's living room chair. Especially noteworthy at the moment are the excellent exhibits "The American Presidency: A Glorious Burden" and "Changing America: The Emancipation Proclamation, 1863, and the March on Washington, 1963.

More than just the place where the Senate and Congress convene, this building is a living history museum

Where: Visitor center at 1st Street and East Capitol Street

From the Senate and House chambers to the pageantry of the building's dome and art collection, this majestic building deserves at least an hour of your time. If you'd like to see a congressional session in action, your best bet is to contact your senator or congressperson well in advance of your trip to see what options there might be. Hour-long Capitol tours are offered Monday through Saturday from 8:30 a.m. to 4:30 p.m, and it's best to reserve a spot on one of these popular tours in advance.

7. WALKING TOUR OF THE NATIONAL MALL

Get an expert's-eye-view of the monuments and memorials

Where: Tours meet at southwest corner of 15th Street and Constitution Avenue and end at the Lincoln Memorial

Okay, this isn't exactly free. DC by Foot operates a two-hour walking tour of the National Mall that invites you to "pay what you like" when the tour is over. In money-mad Washington, that's close enough to a freebie for us! Our one suggestion is: Don't be a jerk.

This four-acre memorial site between the Lincoln Memorial and the Jefferson Memorial is the first on the central axis of the Mall that doesn't commemorate a war or a president. It features a 28-foot-high granite sculpture by Chinese sculptor Lei Yixin, along with a crescent wall engraved with King quotations chosen by historians and writers.

This memorial transforms a painful era in U.S. history into a beautiful touchstone

This deceptively simple wall, designed by American sculptor Maya Lin, lists the names of more than 58,000 American men and women who died in the Vietnam War. The enormity of the loss and the presence of visitors searching for a loved one among the names, which are listed chronologically, make this understated memorial unique and unforgettable.

Whether you think of Thomas Jefferson as the third president, the author of the Declaration of Independence, the hypocrite who opposed slavery but was himself a slaveholder, or the guy who implores Lisa to tell the truth in a memorial episode of The Simpsons, there's no denying that his memorial is beautifully designed and enjoys a particularly pleasant piece of real estate.

From the Wright Brothers to the moon landing and beyond, this is a favorite with kids from 1 to 100

Where: Independence Avenue at 6th Street

Home to vintage flying machines like Charles Lindburgh's 1927 Spirit of St. Louis plane and the 1969 Apollo 11 command module, the National Air and Space Museum is one of the most kid-friendly branches of the Smithsonian. Its lineup features a 20-minute planetarium show starring Sesame Street characters, and air-travel-themed story times, where little ones can keep their hands busy building model planes and rocket ships. And don't forget to stock up on the astronaut ice cream at the gift shop!

While most zoos come with a beastly price tag, this one's free—and open to visitors in the early morning!

There's more to the always-free National Zoo than giant pandas (though, c'mon, what's not to love about wild animals that look like stuffed toys?). Looking for an early-morning destination to hit when the museums are shuttered? The 163-acre grounds of the zoo generally open by 6 a.m.-ish—four hours before its exhibits officially come to life. Stick around and you'll be rewarded with the sight of six resident orangutans making their way—hand over hand—across an almost 500-foot-long stretch of cables connecting two areas.

Long before our ancestors walked this land, there were dinosaurs—and their fossils are just one of the attractions here

Where: 10th Street and Constitution Avenue

The nation's natural history museum will get its first-ever T-rex on Tuesday April 15! It will be in august company, joining other fossils, animal exhibits, geologic formations, and much more. And while the phrase "natural history" may not immediately bring to mind French royalty, you can ogle the 45-carat Hope Diamond, which once belonged to Louis XIV, here.

You might call it the world's most coveted address—here's how to nab a free tour!

It's not impossible to do a tour of the White House, but it does take some planning. And a lot of patience. Once you know when you are going to be in D.C., contact the office of your Member of Congress to request tickets. Requests can't be made more than six months in advance, but no less than 21 days before your trip. It can take five months to book one of the self-guided tours, though. Worth it to get access to the country's most important residence.

Where: 8th Street and F Street

The stately Old Patent Office Building is a lovely showcase for portraits of every president, plus celebrated athletes, artists, and many more notable Americans.

We cannot tell a lie: The view from up here is unbeatable, but the monument is closed until May 14

Where: The National Mall

This immense obelisk was damaged by the earthquake of 2011 and is slated to reopen to visitors on May 14. If normal hours and admission procedures are resumed, you can obtain free tickets on a first-come first-served basis starting at 8:30 a.m. at the Washington Monument Lodge at 15th Street adjacent to the monument. (Advance tickets are available for a nominal service charge.)

Shh! There's more than just books in this spectacular collection!

Just a taste of what the Library of Congress has to offer includes: a first edition of L. Frank baum's The WonderfulWizard of Oz, an early Wonder Woman comic book, the 85,000+ pages of comedian Bob Hope's joke file, and, oh yeah, a Gutenberg Bible of 1455 printed on vellum and one of the world's only perfect remaining copies. Rotating exhibits on literature, history, and the arts are ongoing.

Whoa. Betcha thought the world's greatest collection of Shakespeare manuscripts was across the pond...

Words, words, words, as Hamlet cryptically muttered, are the stuff of this place, which is home to a copy of a 1623 First Folio (the first collected edition of Shakespeare's plays), an Elizabethan-style theater that regularly stages the Bard's work (not to mention music and the work of, y'know, lesser-known playwrights), and the world's finest collection of Shakespeare-related materials and other Renaissance-era books and manuscripts.

You, the people, should see "We the People" in person!

Sure, the name may sound ho-hum, but you may have heard of some of the manuscripts on display in the rotunda of the National Archives: The U.S. Constitution, Bill of Rights, and Declaration of Independence

Unfortunately, most visitors make a rather disrespectful dash across the Potomac for quick photo ops on this hallowed ground, where more than 300,000 American heroes are buried. Instead, set aside part of a day for a 2.5-hour name-your-own-price walking tour that includes the Tomb of the Unknown Soldier, the grave of John F. Kennedy, and the Robert E. Lee Memorial (dcbyfoot.com).

While so many D.C. attractions come without a price tag, hotel rooms aren't one of them. On the contrary, lodgings in this town can be expensive. But these reasonable residences in the hip, lively Dupont Circle neighborhood will serve you well on your stay:

The Normandy offers European style and comfort near the great food and nightlife scene around Dupont Circle (2118 Wyoming Avenue, thenormandydc.com)

Akwaaba Bed and Breakfast is comfortable and reliable in the heart of a vibrant neighborhood a short walk from the Mall (1708 16th Street, dcakwaaba.com).