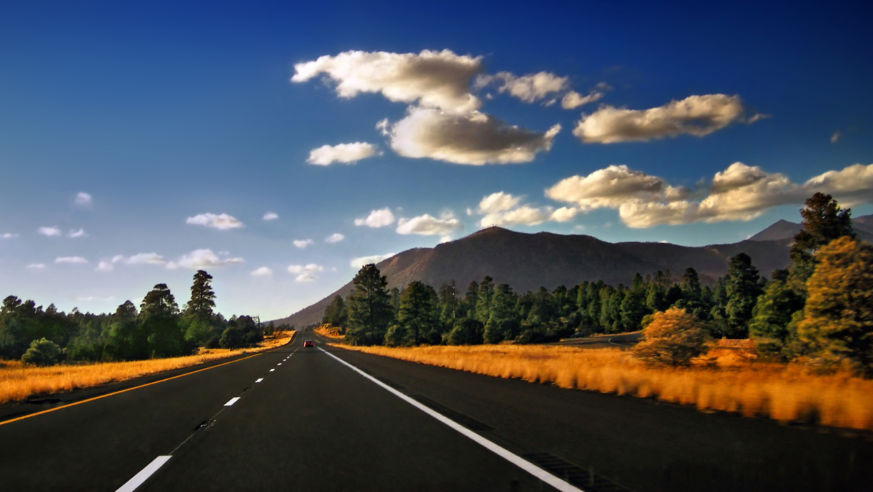 The open road is as much a part of American heritage as the silver screen, which is why we let the cinema—from <i>Thelma & Louise</i> to <i>Sideways</i>—guide us to our country's most inspiring drives.

Nothing triggers wanderlust quite like a classic American road-trip movie. The best of these films evoke the feeling of a place in such a way that the scenery becomes a character in its own right. With that in mind, we started our search for great American drives at the movies, where we watched reel after reel until we found five films that feature U.S. highways and landscapes as prominently as the protagonists. From the vast soundstage of the Southwest to the Technicolor magic of the Alaskan wilderness, each of these drives captures the spirit of the film that inspired the route.

See the Drives for Yourself

Experience one of our nation's cinematic wine regions.

Film Synopsis: This bromantic comedy by director Alexander Payne follows friends Miles (Paul Giamatti) and Jack (Thomas Haden Church) on a tour through one of the less-trafficked areas of California wine country, the Santa Ynez Valley. The film is one of the first to celebrate American wine.

Stick to the Script: To trace the duo's ramble through the region, start at Foxen Winery & Vineyard in Santa Maria, where Miles and Jack sneakily refill their glasses to the brim when the pourer's not looking. Drive south to Buellton so you can dig into Miles's favorite smoked-then-grilled duck breast with apricot-ginger sauce ($25.95) at the Hitching Post II restaurant. After dinner, stroll to the Days Inn Buelltonand bunk like the boys did—breakfast is always free (from $90). Finally, scoot over to Santa Ynez, a gateway village forLos Padres National Forest,where you can preempt a Giamatti-style wine belly by hiking the famous trails.

How to Go Deeper:Santa Barbara Backroads can help you discover the best Sideways highlights with their Deluxe Backroads Wine Tour that visits four vineyards and wineries, including those featured in the film (tours from $149). And when it's time to stretch your legs, make like Lance Armstrong (who used to train in these hills) and hit the road on two wheels. Santa Barbara Wine Country Cycling Tours offers a number of itineraries (from $70 for a half-day tour).

The Great Alaskan Wilderness (Into the Wild)

Embrace the pioneering spirit that has led Americans to explore new frontiers for centuries.

Film Synopsis: Emory University grad Christopher McCandless (Emile Hirsch) donates all of his possessions and life savings and sets off on a two-year journey that ends in a remote part of Alaska's wilderness.

Stick to the Script: "I now walk into the wild,"wrote Chris McCandless in a final postcard from Fairbanks. To explore the Alaskan wilderness yourself, make the scenic, two-hour drive down the George Parks Highway to Denali National Park & Preserve—6-million-plus acres that are home to grizzlies, caribou, Dall sheep, and Mt. McKinley. After orienting yourself at the park's main visitor center, hop a bus to the Wonder Lake area ($43 per adult). There, you can hike in the midst of North America's most awe-striking views.

How to Go Deeper: McCandless's adventure has sparked interest in the Stampede Trail, where visitors have sought to discover Bus 142, the abandoned bus where he took refuge and later died. If you'd rather not go it alone, join City Discovery's Stampede Trail Into the Wild Adventure, a four-hour guided tour on your own zippy little ATV (from $175).

Set out in search of freedom in the wide open expanse of Utah.

Film Synopsis: Friends Thelma (Geena Davis) and Louise (Susan Sarandon) break from their everyday lives and hit the road, where their journey turns into a flight from the law—and they end up choosing freedom on their own terms.

Destination Highlights: In the final, iconic freeze-frame, Thelma and Louise float suspended above Arizona's Grand Canyon, having driven their 1966 Thunderbird convertible off a cliff—and into film history. But director Ridley Scott actually shot all of the desert scenes in Utah, including at Canyonlands National Park and Dead Horse Point State Park. Plan your trip: Bryce Canyon to Dead Horse Point, Utah; 287 miles.

Stick to the Script: Following T&L's itinerary through bitty Western towns could make for a dull trip…unless you plan to rendezvous with a young Brad Pitt type, of course. Barring that possibility, pay tribute to the duo's destiny by road-tripping between two of Utah's unforgettable canyons. Start at Bryce Canyon National Park in southwest Utah. Bryce is home to otherworldly orange rock formations that seem to morph in color and shape throughout the day. Take a ranger-guided hike into the canyon for the full effect. From Bryce, drive northeast, bypassing Canyonlands, to visit Dead Horse Point, where Thelma and Louise's final flight was actually filmed. Canyonlands and Dead Horse Point offer opposing views of one gorgeous chasm. It feels a lot like the Grand Canyon, but without the hordes of chattering tourists and smog from L.A.

How to Go Deeper: Throughout 2011, events across the country are celebrating the film's 20th anniversary. In D.C., for instance, the nonprofit organization Women in Film & Video will host a September 14 screening with Geena Davis in attendance.

Follow the highway that gave birth to the American road trip as we know it.

Film Synopsis: The South and Southwest come alive as Wyatt (Peter Fonda) and Billy (Dennis Hopper) discover themselves and America in this 1960s counterculture classic.

Stick to the Script: Much of Easy Rider takes place along Route 66, which today overlaps much of I-40. If you begin where the twosome hit the open road, in Death Valley, then, like the boys, you'll be ready to refuel by Flagstaff. Try Brix, a restaurant and wine bar, where the chef obsesses over local ingredients from around the Four Corners region (wine from $21 per bottle). Taos and Las Vegas, N.M. (not to be confused with Sin City), are the sites of several scenes (including the debut of fellow traveler George Hanson, played by Jack Nicholson). As you pass through, carve out an afternoon to tour the Taos Pueblo. The UNESCO World Heritage Site is an impressive village of multistory adobe structures that has been home to a Native American community for over 1,000 years. Next, head to the Big Easy. Whether or not you time your trip with Mardi Gras, you can soak up the Creole culture any time of year with visits to Pitot House (the only Creole colonial house open to the public), the Presbytere(part of the Louisiana State Museum), and St. Louis Cemetery No. 1—where the guys' infamous bad trip went down.

How to Go Deeper: Looking to fine-tune your Easy Rider tour down to the detail? Follow this blog written by superfan Mr. Zip66. It chronicles the entire movie and its route in Google Maps glory, with accompanying photos, movie stills, and videos.

The itinerary for the classic family road trip.

Film Synopsis: "Why aren't we flying? Because getting there is half the fun. You know that." A family vacation goes amusingly awry when Clark W. Griswold (Chevy Chase) and clan embark on an epic road trip to Walley World.

Stick to the Script: The Griswold route is a quintessential cross-country tour that hits some of the top sites and cities in the U.S. Start in Chicago, where the Skydeck at Willis Tower will afford you an eagle-eyed view of Lake Michigan from atop the western hemisphere's tallest building. Next, drive down to St. Louis for a look at the Gateway Arch and its Museum of Westward Expansion. Keeping with that "westward ho" spirit, it's off to the Grand Canyon. Check into El Tovar Hotel (where Clark couldn't pay for the room; today, it's $178 per night), then take in the view from the South Rim, where the Griswold fam paused for a millisecond before skipping town. Finally, make your way to Anaheim, so that the kids can experience that real-life inspiration for Walley World that's never "closed for repairs"—Disneyland.

How to Go Deeper: Chevy Chase breaks up the long haul between Missouri and Arizona with a detour to see tacky Cousin Eddie in Kansas. In that spirit, we suggest you visit roadsideamerica.com to choose among numerous kitschy pit stops. In Kansas alone, there's Truckhenge, the Underground Salt Museum, and, of course, the World's Largest Ball of Twine.