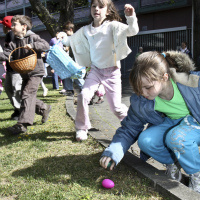 The Easter holiday is only about two weeks away on Sunday, April 8. More than 100 communities are making final preparations for their Easter egg events, which include parades, egg decorating, egg rolling, and egg hunts.

The most famous of these events is the annual White House Easter Egg Roll on April 9. The annual ticket lottery for that event closed earlier this month. The tradition started in 1878 with 19th President Rutherford B. Hayes, who invited children to play Easter games on the White House lawn after mean Congressmen banned the youngsters from the Capitol grounds.

Here are some other events nationwide. Some events are non-denominational, while others are led by local churches.

Merrillville, Indiana. At the Living Hope Church in Northwest Indiana, about an hour's drive from Chicago, about 100,000 plastic eggs will be hidden throughout the grounds, with a hunt beginning at 10 am for children 11 and under. Midday, there will be a helicopter candy drop. April 7, Lake County Fairgrounds, morning, lhcweb.org

Coconut Creek, Fla. On the morning of April 7, this town near Orlando runs hosts its second-annual hunt for 60,000-plus eggs at a local high school for kids up to fifth-gade.

Fremont, Ohio The Hayes Presidential Center holds several egg-rolling and egg-decorating contests, with every child receiving a balloon, a pass to the Hayes Home, and treats. Admission is three hard-boiled colored eggs. afternoon of April 7, kids up to age 10, rbhayes.org/hayes

Felton, Calif. Children hop on a steam train, hearing the story of Peter Rabbit, and then reach a patch in Bear Mountain where they search for chocolate candy eggs. midday, roaringcamp.com, $24, adults, $17 kids, 2-12.

Appleton, Wisc. Pathways Church, on the morning of April 7 will host a hunt with 30,000 Easter eggs and 3,000 pounds of candy. pathwayschurch.us

Our Best Ideas for Traveling with Kids

Flying With Kids: A Survival Guide 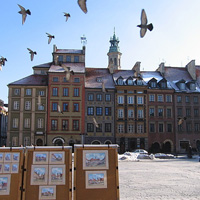 Would You Choose A Vacation Spot Just Because It's Cheap?

At one time or another, we've probably all felt daunted by the high cost of visiting a certain place we really, really want to go&mdash;London, Venice, New York, and Australia come to mind right away. But I'm curious how many BT readers have ever chosen a vacation destination purely on the basis of its exceptional cheapness. The latest Hotel Price Index report came out last week on Hotels.com, and while rates worldwide are up 4% on average, there are still a slew of places where your hotel dollar goes far. Domestically, the ten flat&ndash;out cheapest cities for hotel rates in 2011 (which, in many cases, correspond with general cost&ndash;of&ndash;visit rates) were: Columbia, S.C. (average room rate $65); Macon, Ga. ($72); Albany, Ga. ($75); Dothan, Ala. ($76); Lima, Ohio ($78); Bakersfield, Calif. ($78); Ottumwa&ndash;Kirksville, Mo. ($79); Glendive, Mont. ($79); Montgomery/Selma, Ala. ($79); and Parkersburg, W. Va. ($80). And if you're looking for luxury at a low cost, here are the top international destinations for affordable five&ndash;star rooms, based on prices paid throughout 2011: Warsaw, Poland (average five&ndash;star room rate $130); Marrakech, Morocco ($168); Cairo, Egypt ($189); Budapest, Hungary ($191); Pisa, Italy ($193); Lisbon, Portugal ($195); Brussels, Belgium ($196); Berlin, Germany ($198); and Beijing, China ($203). Does knowing that you can stay in Columbia, S.C. for $65 a night make you more likely to consider a visit to the South Carolina capital, with its historic homes, riverside zoo, and university&ndash;city energy (not to mention all that old&ndash;fashioned comfort food)? Or are you more tempted by the idea of living like a king in one of Warsaw's finest hotels for the cost of, say, a run&ndash;down pension in Paris? How much do accommodations costs affect your vacation decisions? Tell us in the comments! MORE FROM BUDGET TRAVEL Top Budget Travel Destinations for 2012 8 Cool New Tools for Finding the Perfect Hotel World's 16 Most Picturesque Villages

As Japan marked the one-year anniversary of the earthquake and tsunami that devastated the island nation on March 11, 2011, the country's tourism officials report that travelers are starting to trickle back. In January 2012, Japan welcomed 700,000 international tourists, a 4.5 percent decrease compared to January 2011, according to the Japan Tourism Agency, the government's tourism promotion arm. And while the tourism numbers are still slightly down, that represents a major improvement over the 70 percent dive in tourism the country experienced immediately after the earthquake. To mark the anniversary and the recovery efforts, the Japan Tourism Agency and Japan National Tourism Organization launched a campaign called "Japan. Thank You." It is intended to communicate the gratitude of the Japanese people for the global support it has received. As the recovery continues, the nation is hoping that its famous cherry blossom season this spring can help attract even more international travelers. There are also numerous promotions in the Japan travel market intended to stimulate travel back to Japan. The Japan National Tourism Organization issues regular travel advisory updates, hoping to help travelers better understand the situation on the ground in Japan, including the threat of radiation. It reminds travelers that the radiation level in Tokyo is similar to that of New York City. The organization also has a map on its website showing where the Fukushima Daiichi Plant is located in relation to other major cities across the island. Would you still be wary of going to Japan? How come? More from Budget Travel: Wendy's Goes Gourmet in Japan How travelers can help Japan recovery Budget Travel reader reaches out from Japan

Yes, the most famous St. Patrick's Day festival is in Dublin. But did you know that there's a Caribbean island that celebrates the holiday with great fanfare? Montserrat is the only country in the world besides Ireland where St. Patrick's Day is a national holiday. The volcanic island, which has the nickname of "The Other Emerald Isle," was colonized by Irish Catholics from nearby St. Kitts in the 1630s and by 1678 half the residents were Irish. March 17 also has an additional significance to the people of Montserrat beyond the Irish heritage. The celebrations here also commemorate a failed slave uprising on that day in 1768. Today, locals and tourists celebrate with a weeklong festival that lasts until Montserrat Day (March 19). Things are a little different here than on the island on the other side of the Atlantic. The weather is decidedly sunnier, for one. Instead of pints of Guinness, revelers drink rum punch and fresh juice straight from coconuts. It's also doubtful that spear fishing tournaments or goat water competitions have ever factored into the Irish celebration. MORE FROM BUDGET TRAVEL 26 Stunning Ireland Photos 15 Things You Didn't Know About Ireland Top Budget Travel Destinations for 2012

And America's Best Beach Is…

Even after a warm winter, there's nothing like early&ndash;onset spring to get the mind in beach vacation mode. And from sea to shining sea, America's not short on beaches to brag about. But which of them ranks supreme among public opinion? Surprise: it's not in Hawaii or California. It's in Florida, but&mdash;surprise, again!&mdash;it's not Miami or the Keys. As part of its 2012 Travelers' Choice Awards, TripAdvisor recently compiled millions of user ratings, and St. Pete Beach, Florida, was crowned Top Beach Destination in the U.S. With seven miles of white sand to its name, St. Pete Beach edged out fellow Florida contender Miami Beach (second place) as well as Myrtle Beach, S.C. (third place) to claim the number one spot. Rounding out the list: Virginia Beach; Honolulu; Daytona Beach; Fort Lauderdale; Lahaina, HI; San Diego; and Key West, coming in at tenth place. St. Pete Beach was so popular that it even took fifth place (out of 181) in rankings for beaches worldwide, coming in just below Providenciales in Turks and Caicos; Palm Beach&mdash;a.k.a. Eagle Beach&mdash;in Aruba; Tulum, in Mexico; and Negril, in Jamaica. Luckily for us BT&ndash;ers, TripAdvisor's most in&ndash;demand beach is also a wallet&ndash;friendly one, especially when compared to its flashier neighbors. Take Miami, for instance&mdash;the average hotel rate was about $159 per night in 2011. Honolulu is even pricier, with hotel rates running about $175 on average last year. Even in Myrtle Beach, where you can find a relative bargain, the average room was still $122 per night in 2011. And for the St. Petersburg/Clearwater area? Try $84. The secret might be out on St. Pete Beach, but we still want to know what your favorite beaches are. Don't forget to nominate your Favorite Secret Beach for our Readers' Choice poll! More from Budget Travel: Where Are the Anti-Spring Breakers Going? Secret Beaches of North America 20 Girlfriend Getaways Within Reach