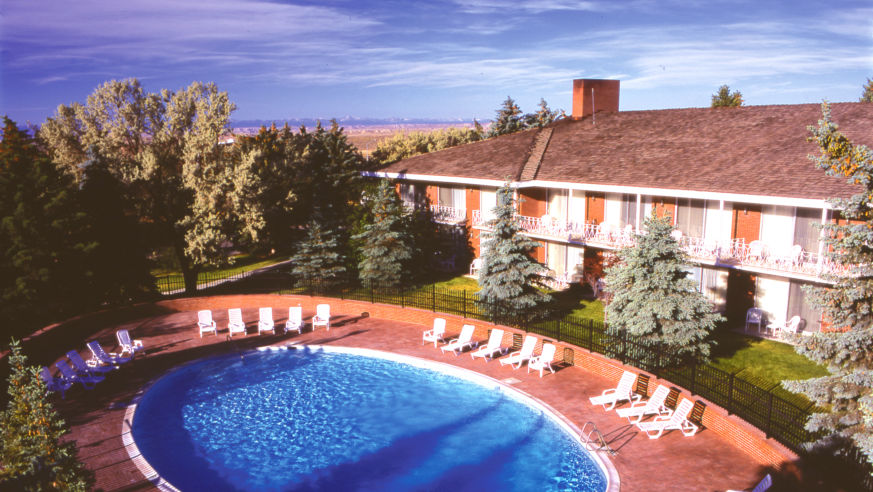 This luxe Western oasis offers old-school elegance and world-class golf, a stone's throw from the highway.

If you’re from the western U.S., you’re likely familiar with Little America, which has large, longstanding properties in Salt Lake City, Flagstaff, and Cheyenne. Named for a research station in Antarctica, the company's resorts have a charming “Western luxe” look and feel, with low-slung buildings spread out over grounds—sort of the open-range version of the sprawling properties that made the Catskills famous in the 1950s and '60s. The Cheyenne location is no exception, but its wide prairie views are an added bonus.

Little America Cheyenne was its own town before hoteliers came along in the first half of the 20th century, transforming the one-time municipality into their inaugural property. The carpeted lobby leans heavily on its Western influences, with couches, a fireplace, and rodeo-themed sculptures and lamps. Restaurants and a shop with cowboy- (and cowgirl-) influenced clothing, jewelry, and paraphernalia are located around the lobby's perimeter.

Among the 188 rooms, there are eight sizes to choose from, and even the smallest of the bunch—the Deluxe King and Deluxe Two Queens—are spacious. Each room is adorned with art chosen by the owners, and larger rooms include a comfy sitting area. The property underwent a renovation in 2006, and all of the rooms were updated to include mini-fridges and microwaves, among other improvements. Additional amenities include a Keurig coffee maker, flat-screen TVs, and complimentary high-speed Wi-Fi. Pet-friendly rooms are available.

The resort is equal parts a family hotel suitable for extended stays and an oasis for long-haul travelers and cross-country road-trippers, as it’s located at the intersection of I-80 and I-25. It’s a quick ride (about $10 in an Uber) to Cheyenne Frontier Days Park as well as downtown, so if you’re looking for a night of bar-hopping, you’re covered.

The current proprietors also own Sinclair Oil, a Wyoming refinery and gas-station chain with a number of locations, including one at the end of the hotel’s parking lot, which makes for an easy fill-up before you get back on the road.

Hathaway’s Restaurant and Lounge, a family-friendly, old-school-glam eatery, evolved from the hotel’s original restaurant, Cheyenne’s Coffee Shop and Western Gold Dining Room. It still serves the homemade turkey roll that was early restaurant’s signature, but now it's merely one of many hearty dishes on offer, like prime rib, chicken-fried steak, and lots of burgers, sandwiches, and salads. The menu is also available in the lounge, a low-key space where travelers from around the nation rub elbows. Breakfast at Hathaway's is well-regarded, drawing locals for the weekend brunches, especially the elaborate and abundant affairs on Mother’s Day, Thanksgiving, and Easter.

A Golf Association–rated course extends across the property and, accordingly, draws travelers working on their swing. There are sporty activity options beyond the golf course too, from a heated outdoor pool to a cute playground to a modern fitness center. For business travelers, there's a business center with computers and printers as well as plentiful meeting rooms and convention services.