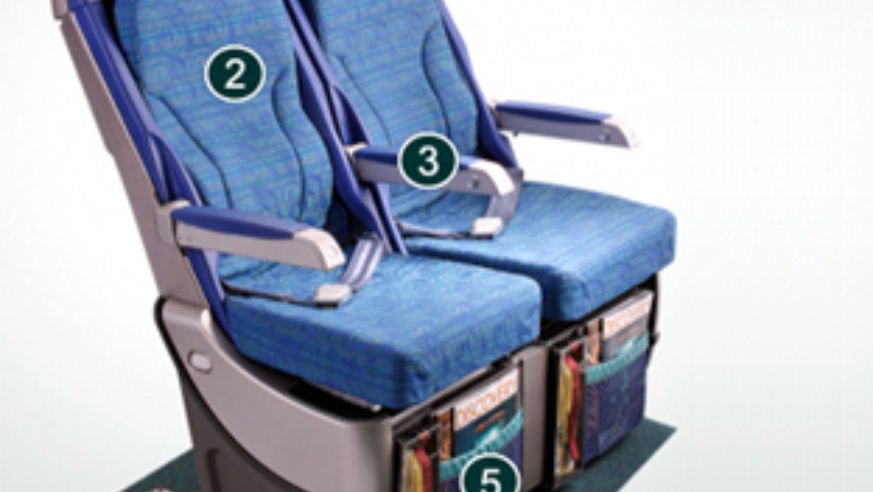 Cathay Pacific is adding better seats to its airplanes. On Oct. 18, the airline began offering these seats on its daily flights out of San Francisco. [Update 11/6: A Cathay Pacific spokesperson now says that the San Francisco flights will begin to offer these seats in March 2008.] On Nov. 16, it will add the seats to its flights out of New York City to Hong Kong. Last week, I got my first look at 'em.

In economy-class, the most important new feature is that the seats no longer recline backward at an angle. Instead, the seats have cushions that slide down and recline into the shell of the seat. This is good news if you're someone who hates it when the passenger in front of you reclines his or her seatback into your space.

But the legroom (called "seat pitch") remains the same: 32 inches. Tall passengers may find that Cathay Pacific's seat cushions now slightly move one's legs forward. However, airline spokespeople say this shouldn't be a problem. The seat frame and structure has been designed to max out knee and shin clearance by stripping out the awkward fixtures and fittings that jam up against the kneecaps on many airline seats.

Another change: The pocket (or netting) that's used for storing magazines and other items has been moved by designers from underneath the tray table to underneath your seat, lessening the chance that your legs will touch it.

Here are some other perks of the economy-class seats:

Each seat comes with an eyeglass holder, which is a real boon if you wear specs and have had to store them while sleeping mid-flight. Each seat also comes with a 110-volt standard electric socket. As a standard feature, a coat-hook is also offered. Most important for some travelers, the seatback TV screen is nine-inches, somewhat larger than Cathay Pacific's previous standard for economy class.

Each seat also has a three-point belt, which means that it will be much more obvious to flight attendants passing through the aisles whether your seat buckle is fastened. Today, the industry standard is, of course, the two-point belt. If you toss a blanket over top of your two-point belt while you're sleeping, you hide it from the flight attendant, who may have to disturb you to check to see that it is belt buckled during the flight.

Not all Cathay Pacific flights have these seats, but they are being rolled out to all flights to-and-from the U.S. by May 2008.

THE REAL DEAL This year, Cathay Pacific upgraded its famous All Asia Pass, enabling you to visit roughly two-dozen cities in 21 days. The pass includes travel to 23 cities in Cambodia, Thailand, Japan, Korea, Malaysia, Pakistan, the Philippines, Singapore, Taiwan, and Vietnam. It costs $1,599. If you sign up for the airline's e-newsletter, you can qualify for a $200 discount for departures on certain days of the week. Additional airport taxes and fees are roughly $54 for the U.S. as well as from $20 to $80 for each foreign destination. The pass must be booked through a travel agent, who will likely charge a fee.