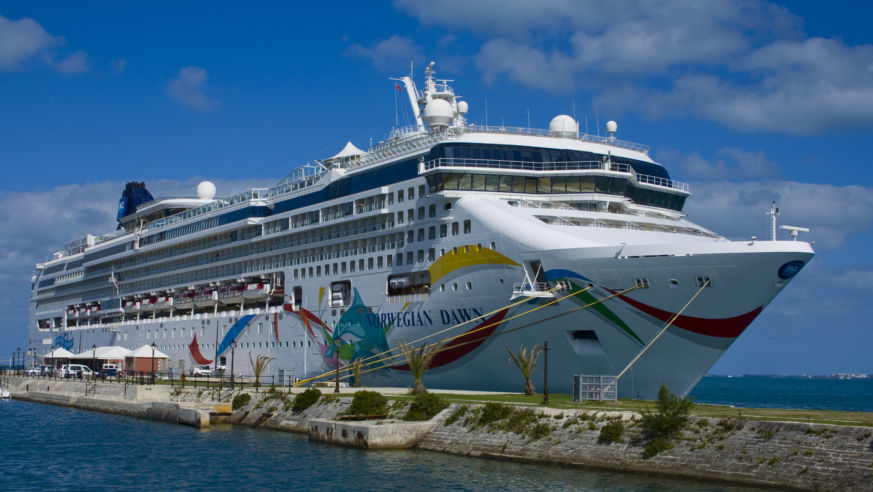 Learn the phrase that can save you 5 percent on your next cruise.

This article was written by Laurie Martins and originally appeared on Yahoo Travel.

Who: Laurie and Albino Antonio Martins a.k.a "Martins"

What: Met on the SS Norway sailing from Miami, Florida

(As told by Laurie)

I had asked my sister if she wanted to go on a cruise with me. She's an OR nurse and couldn't get time off due to the surgery schedule, but told me about her favorite cruise on Norwegian Cruise Line and encouraged me to go by myself. She assured me that I'd make new friends and wouldn't feel uncomfortable traveling solo. I decided to trust her and booked the cruise.

Following the mandatory lifeboat drill, I decided to go up to one of the promenade decks where I expected to make friends and mingle with other single passengers. There were none to be found. I started to question if my sister was right. At 38, everyone else seemed to be about my age, but after watching groups of 4-6 single women traveling together and starry-eyed couples beaming into each other's eyes, I retired to my cabin.

I dressed for my first dining room dinner and entered the room a bit apprehensive. The cruise line determined the seating arrangements, so I didn't know what to expect. The maitre d' ushered me to a table with five women seated. We exchanged greetings and introductions and I learned they were sisters and friends traveling together from Canada. Once they found out I was alone, they adopted me into their group. My sister was right!

By the second night at dinner, I told my table mates that I thought our waiter, whose name tag simply said "Martins," was possibly one of the most handsome men I had ever seen in all of my 38 years. His elegant looks and mannerisms were only enhanced by the most beautiful European accent. He was the topic of conversation the entire evening, and we giggled and laughed flirtatiously with everything he said.

At dinner on the third night, we invited him to one of our cabins to share a drink. He charmingly accepted and asked for the cabin number. One of the women named Bea responded by giving him my room number. Later that evening, my new friends and me were toasting champagne and listening to music when there was a knock on the door. I opened it to see Martins, dressed in off-white slacks and a tank top. He had a beautiful smile highlighted by beautiful pearly white, perfectly aligned teeth. His biceps were amazing and I was thrilled to note that he wore embroidered, monogrammed Ralph Lauren socks. Perfect from head to toe.

It turned into a really fun night and we all got sillier and sillier with every round of drinks. We taught him English words and phrases, laughed together, and when a tango played on the television, he grabbed my hand, pulled me to my feet and danced with me. As morning started to creep up, the other women retired to their cabins and Martins and I talked our hometowns, families, friends, and jobs until 4 a.m.

The next morning at breakfast, my new friends asked me "what I had done" to him, reporting that he was singing like a bird that morning. I told them about our long talk, and that despite the fact that he spoke very little English aside from food-related subjects, our conversations were comfortable and free-flowing from the beginning.

The next few nights, he joined us in my cabin. As the cruise was nearing the end, he asked if he could accompany me to the airport after the ship arrived back in Miami. Of course, I told him yes.

While we were waiting for my flight, he took my hand, kissed it, and told me he "knew why he was born."  Knowing I was divorced, had two sons (ages 18 and 11), and had my share of unhappy times, he vowed that "no one would ever make me unhappy again." He promised that he "would always take care of me" and pledged his love.

After I returned home, we exchanged weekly cards, letters, and telephone calls. As things got more serious, he began to fly me to Miami and pay for my airfare and hotel room once a month. The following January, he took me to Portugal to show me his country. I was able to see his beautiful homeland, tour some castles, be wined and dined, and best of all, meet his family.  We stayed in his family's home for two days. It was after meeting them, laughing with them, eating, and talking with them that I understood where this wonderful man was nurtured and raised.

Martins asked me to marry him in the National Palace in Sintra, Portugal. It's a place where kings and queens once walked, and he told me he would "feel like a king every day of his life if I would marry him." Doesn't get any more romantic and wonderful than that!

The next two years were filled with flights to Miami for romantic rendezvous weekends, more visits to Portugal, and nonstop telephone calls and cards to each other. Finally, I was able to marry the love of my life on June 16, 1990.

25 years later, he remains true to his worlds. I am living happily ever after with my personal Portuguese Prince Charming.

Yahoo Travel profiles readers who came back from a trip with the best souvenir ever—true love. Want to share your own story? Email us at traveleditors@yahoo.com.

What Other Countries Really Think of America

Apparently L.A. is the Best Place to Find a Date on Vacation

The 10 Most Insane Shopping Malls Around the World