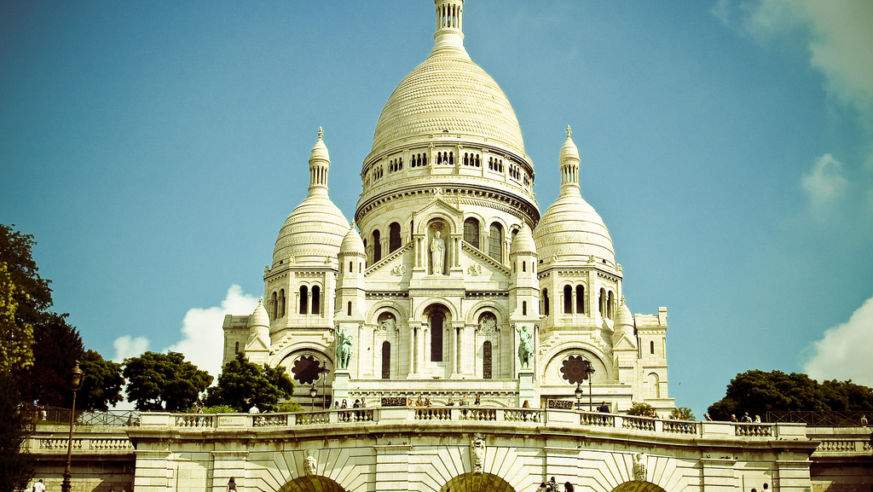 I just got back from an amazing trip to London and Paris with Contiki, a tour company that specializes in tour packages for 18-to-35-year-olds, where I spent nine days touring the sights and attractions both cities are known for—myLondon & Paris, plus Paris Extensiontour included guided day-trips to Stonehenge, Bath, and Versailles, as well as group visits to the Eiffel Tower at night, a show in London's West End (ours was to Mamma Mia!), and an optional trip to see the Moulin Rouge dinner show that I couldn't resist. Needless to say, I was able to get a great sense of both places before the two-day extension portion of my trip started in Paris—Contiki's plan allowed for a great mix of time spent with the group, time in smaller groups, and plenty of solo travel time during the last two days, which I used to explore the city on foot, armed with my camera and a few French phrases, soaking up every moment  and appreciating the beauty around me. For a look at my journey through London and Paris, please follow our brand new Instagram page, mybudgettravel.

A special thank you to everyone who shared their favorite places to visit (and eat!) in London and Paris in the comments section of this story. I loved reading through these and testing them out, and if you're in the process of planning a trip to either city, I suggest you do the same!

Paris, like any other city, is no stranger to petty theft and we've covered this before in this story about how to visit Paris without getting your pocket picked. On our first night in Paris, our knowledgeable Tour Manager took us aside and told all of us to watch out for these three popular scams practiced throughout the City of Light (the last is a variation of one of the big three) in case we should encounter them during our trip. Armed with this knowledge, I was able to meet each of them head-on as a level-headed traveler, rather than ill-informed tourist, and escape each of them without a fuss. Please don't let this affect your doey-eyed, romantic view of Paris (I didn't!), just think of it as something to be aware of, you know, just in case.

Please Sign My Petition for a Super-Worthwhile Cause!
This scam is really banking on you being a nice person who wants to help change the world...and a silly tourist who can't understand French writing. I was standing on the "Love Bridge" at Pont de l'Archeveche, looking for a spot to attach my lock when a young girl approached me with big, sad eyes, said nothing, and shoved a clipboard in my face that said, "Won't you help the blind and the deaf?" There were a few signatures to indicate that this was a petition, but the rest was all in French, and as our Tour Manager informed us, most likely said something along the lines of, "If you sign this, you have to give me 500 euros or else." Recognizing the scam for what it was, I simply said, "No, sorry, no," until she took the hint and moved onto the next person. Watch out for this one around any major city sight, and never sign anything while you're away from home just to be on the safe side.

The String Trick
This particular scam is most commonly practiced throughout the Montmartre area and our group ran into it on our way from the Metro to the giant staircase (described below) that leads to the Sacre Coeur, a popular stomping ground for tourists. Honestly, this is the one I really want you to watch out for—the other scams are all based on distractions and tourists not knowing any better, but this one could actually get ugly if you're not paying attention. What happens is someone will approach you on the street with a piece of string, yarn, or other crafty-looking item and ask if you want them to make you a "Friendship bracelet" or "Friendship Ring." Whatever you do, just say no and keep walking. Trust me. Our Tour Manager explained how if you agree, the person will slide the string over your finger (or wrist) and tie it so tight that it's impossible to escape from. This person (and possibly a few of his or her larger friends) will then lead you over to the nearest ATM, only setting you free from the trap after you've emptied the contents of your bank account. A group of hopefuls approached us as we walked, but we knew it was coming, so were able to say, "No" and keep walking away, no harm done. We did, however, spot a woman on the other side of the street having a bracelet made, so it was a rude awakening that this actually does happen. Just say no thanks, and keep going.

The Ring Trick
Deeply based in distraction and the hope that the victim will fall for just about anything, there are several versions of the Ring Trick that usually involve a gold ring or otherwise valuable looking object being left in plain sight. When the unsuspecting tourist picks it up and tries to see who it belongs to, someone either steps forward and demands money for your newly-found "gift," or tricks you into believing it's worth paying crazy amounts of money for. Our Tour Manager said he's heard of people paying 50 euros for a gold ring they were promised would bring them luck. Please, oh please, don't be that tourist. If it's not yours, just leave it alone.

Did You Drop Something? (A variation of the Ring Trick)
I encountered this one on the steps of the magnificent Sacre Coeur in the Montmartre neighborhood of Paris, just moments after ascending what has to be the world's longest, steepest, tallest staircase—at least it feels like that. (Lesson learned, next time, just suck it up and take the nifty little funicular stationed right next to it!) Anyway, it's a distraction technique guaranteed to draw your eyes—and your attention—off your wallet. Basically, if you're standing somewhere and hear something drop to the ground, but you know you haven't dropped anything, just walk away. The idea is to make you think you did actually drop something of value, and bend over to look for it, thus giving the person who really dropped it enough time to snatch your wallet. Sneaky, huh?