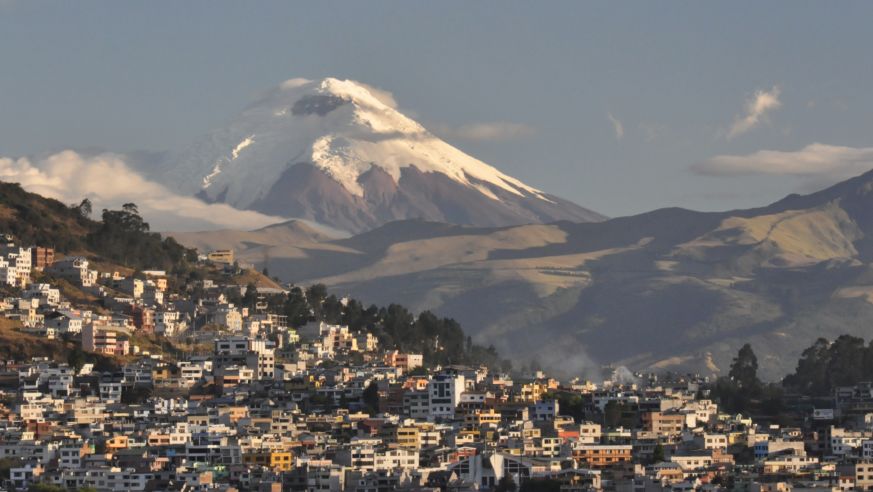 Here's how to spend 72 hours in what locals call "the city of bell towers." Check out the following itinerary and be sure to bring your walking shoes!

A decade ago, the world's second-highest capital had a reputation for being disorderly and dangerous, full of panhandlers and thieves. Nowadays, thanks to government initiatives to clean up the downtown neighborhoods, the city is among the safest in Latin America with the added distinction of being one of New7Wonders' 28 candidates for World's Most Beautiful City. Add to this the immaculate condition of its historical landmarks—it was the first city chosen by UNESCO as a World Heritage site—and the perfect year-round weather, and you have an ideal weekend travel destination. To maximize your 72 hours in what locals call "the city of bell towers," check out the following itinerary. Be sure to bring your walking shoes: Quito's hills can put even experienced hikers to the test.

9:00     This DIY walking tour starts with two of Quito's not-to-be-missed historical churches, the Compañía de Jesús and the Convento de San Francisco. The former is the Latin American baroque at its most dazzling: lofty cupolas, intricately carved cedar framing the side chapels, ceilings crowded with indigenous designs, and gold leaf everywhere. The latter is more somber and houses one of Quito's most famous statues, the Virgen Inmaculada by Bernardo Legarda. Note: Your experience of the Compañía will be greatly enhanced if you hire one of the excellent English-speaking guides that haunt the vestibule. If you're a souvenir junkie, the Tianguez market in the Plaza de San Francisco, just below the church itself, is popular but overpriced.

11:30   Two blocks from the plaza is the house of Quito's greatest revolutionary leader, Antonio José de Sucre. Hero of the Battle of Pichincha, which secured Ecuador's independence, Sucre spent just one year in this lovely 18th-century home before being assassinated. The stables, kitchen, salon, and dining room are elegant yet homey—you can still see the Mariscal's guitar hanging from the bedroom wall.

12:30   After all that history, you'll have worked up an appetite. To feed it, head to ¡Hasta la Vuelta, Señor!, located in a charming inner courtyard of the Palacio Arzobispal in the Plaza Grande. If you've never sampled Ecuadorian cuisine, seco de chivo (goat stew) and a plate of mixed empanadas are a perfect introduction.

2:30     Ecuadorian food can be rich, so while you're digesting, take advantage of your body's down time to hail a cab to the TelefériQo, the cable-car system that whisks visitors up the slopes of Pichincha Volcano to an altitude of 14,000 feet. The views of the surrounding valley are awe-inspiring. If there's a line, you can buy an express ticket, and near the exit there's also a cute amusement park for children (and their parents).

5:30     Next it's off to New Town, Quito's modern tourist district to the north, and the seat of the city's two main parks, Parque el Ejido and Parque Carolina. The former has a thriving souvenirs market; the latter features a beautiful lagoon with paddleboats for rent. Take a few hours to wander and soak up the Andean sunset.

7:30     For dinner, New Town's La Mariscal district offers many options. Among the best is Mama Clorinda, a small tavern that serves excellent fritada (fried pork) and seafood. Try the llapingachos, small pancakes made with potatoes and cheese.

10:00   Quito's nightlife scene isn't as raucous as that of other South American capitals, but the bars and discos around the Mariscal's Plaza Foch are lively enough. Every night is different, but Bungalow 6 and NoBar consistently seem to draw heavy crowds. If you want to get your salsa on, head to the underground Seseribó, a short cab ride away.

9:00     Ecuador means "equator," and no trip to Quito is complete without visiting Mitad del Mundo, the point through which (supposedly) the Big Line passes. Any one of countless buses will take you directly to the tourist complex. After snapping the requisite photos, check out the Inti Nan museum, which claims to be the site of the true equator and features interesting activities and reconstructions of native lodgings. For lunch, browse through the menus of the inexpensive restaurants just down the road.

2:00     The House of Oswaldo Guayasimin, Ecuador's most famous modern artist, is testimony to its owner's lifelong pursuit of beauty. Home to the painter's own impressive collection of South American masterpieces (his own and those from the pre-Hispanic period onward), it is also one of the most beautiful buildings you will ever have the privilege of entering, a true paradise of the senses. Next door is his magnum opus, the Capilla del Hombre, a memorial to the sufferings of indigenous peoples everywhere.

5:00     Late afternoon is a perfect time to see the Panecillo, the hill that overlooks Old Town Quito, and a former Inca site for sun worship. The best views to be had are from the observation deck of the Virgin of the Americas, the apocalyptic statue on the hill's peak. As the sun sets, the surrounding hills become swathed in mist. Be sure to take taxis to and from the hilltop site for safety.

8:00     For dinner, it's back down the hill to La Ronda, the most romantic street in Quito. A former red-light district, it underwent gentrification a decade ago and is now a mix of artisans' studios, bohemian cafés, peñas (supper clubs with live folk music), and criollo restaurants. Good options for dinner are La Primera Casa, Café Ferran, and Los Geranios. Don't forget to try canelazo, a traditional Ecuadorian hot toddy with cinnamon.

10:00   After sleeping in, start your Sunday with a leisurely American brunch at The Magic Bean in La Mariscal. Yes, the prices are a bit high, and it's full of backpackers, but the big breakfasts really hit the spot after a festive night out.

12:00   For a final, comprehensive look at Ecuador's long history, head to the Museo Nacional de Ecuador, near Parque el Ejido. There you'll find three wings dedicated to the pre-Hispanic, Colonial, and Modern periods, with abundant artwork from each. Highlights: one of the world's only statues of a pregnant Virgin Mary, and pre-Colombian animal sculptures that you'd swear were from Ming China.

3:00     For your final meal prior to catching your flight out, consider La Canoa in La Mariscal. This friendly diner serves excellent carne asada, fried fish, and of course, empanadas. A perfect ending to your perfect weekend in Ecuador's luminous capital.

Mike Gasparovic is a freelance writer, editor, and translator who devotes his free time to studying the history, art, and literature of the Spanish-speaking world and learning about its people. He currently lives in Lima and wrote this article on behalf of South American Vacations, providers of tours to Ecuador and throughout all of South America.