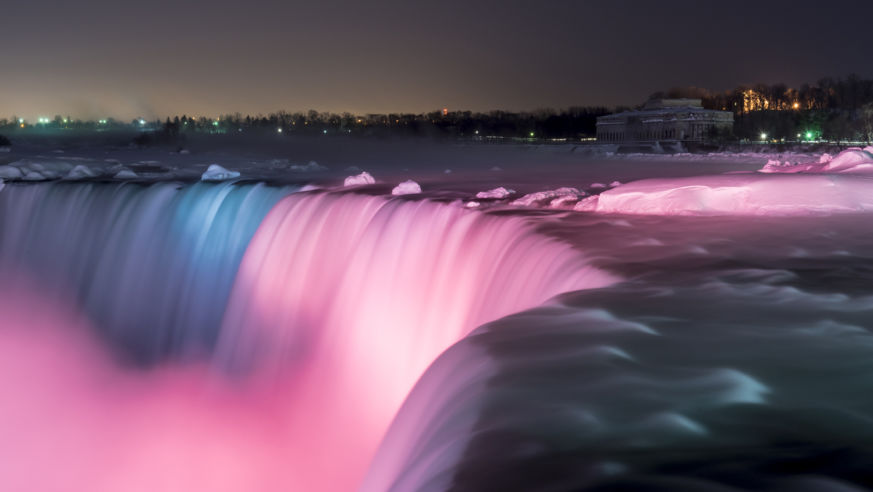 Go north, eh? Canada is celebrating its 150th anniversary in 2017 in a big way. Which is utterly appropriate for a nation that boasts some of the biggest or oldest or most unusual travel sites on the planet.

For an untold number of years, Americans have held a rather narrow view, to say the least, of Canada. All too often, say "Canada" to an American and people think Montreal, a Francophile’s accessible fantasy; Niagara Falls, ice hockey, poutine, and the Toronto Blue Jays (because, well--baseball.) Chalk it up to Justin Bieber’s endless stream of chart-toppers, Ryan Reynolds’ show-stopping performance in “La La Land” and, of course, just about everything that Justin Trudeau, dreamboat-in-chief and humanitarian extraordinaire, says and does, but these days Canada is on everyone’s minds. And travel bucket lists.

It’s Canada’s moment, and not least because 2017 marks the nation’s 150th birthday. As a tribute to our 3,855,103-square-mile northern neighbor and its greatness, we did some exploring, in case you’re thinking of paying a visit this year. Not only did we find some astonishing and unique sights and destinations, we found that many of them are the best—the biggest, the tallest, the oldest, the most uncommon—in their class. In other words, Canada is not just great in a lot of ways. It’s unrivaled. Here are just a few of the reasons why.

As we did our research, we ended up asking ourselves over and over again: will wonders never cease? Of course, Niagara Falls is the belle of Canada’s natural ball, but over the vast landscape, plenty of other spectacles are worth seeing. Geographically speaking, Newfoundland and Labrador is home to Cape Spear, the most easterly point in North America and home to an iconic lighthouse, where the dawn breaks first.

The Charlevoix region, an hour east of Quebec City, draws adrenaline junkies because of Le Massif de Charlevoix, a mountain looming above the St. Lawrence River with the highest vertical drop east of the Rockies. Within its boundaries you’ll also find the 11th biggest crater on earth, the still-breathtaking effect of a 15-billion-ton meteorite that crashed down between land and a river 400 million years ago, resulting in the province’s hilliest region and one of North America’s most panoramic road. In the Quebec Maritime region, the Manicouagan impact crater, which fell to earth 215.5 million years ago, is 62 miles in diameter, making it the fifth largest in the world. It's visible from space.

The largest tree, a Sitka spruce casually referred to “Heaven Tree” grows in British Columbia's Carmanah Walbran Provincial Park. It's 11.5 feet in diameter and is estimated to be 800 years old. The “Hanging Garden Tree,” a vision to behold on Meares Island, near Tofino, is one of the oldest known western red cedars, estimated to be anywhere between 1,500 and 2,000 years old.

Provincial Park is home to one pretty mighty tree, but Kitlope Heritage Conservancy Protected Area on BC’s central coast is the location of many, many trees that make up the world’s largest intact coastal temperate rainforest. Home to bald eagles, grizzlies and plenty more wild animals, it's over 793,208 acres and located within the traditional territory of the Haisla First Nation. If you want to check it out, it’s best reached by boat and July and August are prime time to visit.

And as for water, when we talk about rivers, lakes, and oceans, we talk about depth, distance, and what lives beneath. We don’t, however, talk about speed. Unless we’re in Skookumchuck Narrows on BC’s Sunshine Coast. The water rushes along at more than 16 knots, one of the fastest flowing tidal currents on the planet. But what’s a mere breakneck tidal current in the face of a whirlpool? New Brunswick lays claim to the brutally powerful Fundy’s Old Sow Whirlpool, which, with a width of 75 meters, is the largest in the Western Hemisphere and second largest in the world. (The largest is the the Maelstrom Whirlpool of Norway.) Its sheer force is evident at the Bay of Fundy, known for having the highest tides on Earth.

Kelowna, a small city in the south of British Columbia, is arguably the most attractive to active, sporty types. The highest skating rink in North America sits 5,570 feet above sea level at Big White Ski Resort. It’s Olympic-size, free to use, and offers awe-inspiring mountain views. Pretty though it may be, Kelowna’s rink is practically quaint compared to the Rideau Canal Skateway, the planet’s largest naturally frozen ice skating rink, as declared by the Guinness Book of World Records. Every winter, the Rideau Canal, Ontario’s first UNESCO World Heritage Site, freezes into this playscape, which stretches for 4.8 miles through downtown Ottawa and has a surface area equal to 90 Olympic-size rinks.

Attention adrenaline junkies: Peachland’s ZipZone is Canada’s highest freestyle zipline, a 381-foot thrill ride. Winsport, a sprawling athletic center in Calgary, has Canada’s fastest zipline, along which you can cruise at 87 mph.

This one comes from the department things you never realized were measured but are: publicly owned waterparks. Kelowna’s H2O Adventure and Fitness Centre is Canada’s largest, with waterslides and plenty of other water runs. Add in Canada’s most extensive cycle network, a 211-mile expanse, and it’s little surprise to learn, then, that Kelowna is Canada’s fittest city.

The annual HOPE Volleyball SummerFest, which takes place at Mooney’s Bay on the Rideau River near downtown Ottawa, is the largest one-day beach volleyball tournament in the world. (And it raises thousands of dollars for deserving local charities.)

There’s an old joke that goes: What’s the difference between Canada and yogurt? Yogurt has an active culture. (*rimshot*) Well, turns out Canada gets the last laugh in the culture department, what with an assortment of longstanding theaters and museums and brand new institutions. In Winnepeg, for instance, Winnipeg Art Gallery is the oldest civic museum in Canada and home to the world’s largest collections of contemporary Inuit art. The city, Manitoba’s capital, is also home to Canada’s Royal Winnipeg Ballet, the country’s oldest ballet company and the longest continuously operating ballet company in North America. Speaking of enduring, Winnipeg's Le Cercle Moliere is Canada’s oldest continuously running theatre company while Rainbow Stage in Kildonan Park is Canada’s largest and longest-running outdoor theatre.

But there are plenty of new establishments of note, too, like the Canadian Museum for Human Rights, which opened in September 2014 and is Canada’s first national museum to be built outside the capital region. It's also the only museum exclusively focused on the history and future of human rights. Saskatoon is on track to open the Remai Modern this year 2017. The museum, which comes with a $80.2 million price tag, houses the world’s largest collection of Picasso linocuts.

And for all the trivia nuts out there, here’s a fun fact: St. Boniface Museum in Manitoba, which houses artifacts related to Western Canada’s French-Canadian and Métis heritage, is located in a former Grey Nuns’ convent house, which was built around 1850 and happens to be the city’s oldest remaining structure and the largest oak log building in North America. The title for the nation’s oldest, continuously operating museum, however, goes to New Brunswick Museum, established 1842. This family-friendly institution spotlight’s the region’s art, cultural heritage, and scientific history.

Look at the municipal schedule of any Canadian city and you’ll easily be convinced that Canada holds more festivals than any other nation. We don’t have the international data to confirm that, but while we compile a comprehensive listing of festivals throughout the year, we can offer a few teasers: The Ottawa International Animation Festival is North America’s largest animation festival. The annual Ottawa International Chamber Music Festival (AKA: Chamberfest) is the world’s largest chamber music festival. Not to be outdone, Winnepeg: Folklorama is the world’s largest and longest-running multicultural festival, allowing visitors to travel the globe in one city at 40-plus pavilions featuring traditional food, drink, cultural displays and live entertainment from countries around the world. Meantime, Western Canada's largest winter festival is Festival du Voyageur, where Voyageur, Métis, and First Nations histories are brought back to life with music and performances, food, and lots more.

Some of Canada’s restaurants have rather eccentric claims to fame. BC Kicking Horse Mountain Resort, near Golden in the Kootenay Rockies, is home to the country’s highest restaurant, the Eagle’s Eye. It’s 7,710 feet high on the summit of the Golden Eagle Express gondola.

Over in Winnepeg, RAW: almond is the world’s only pop-up restaurant located on a frozen river, and Mon Amis Louis is North America’s only restaurant on a bridge. The eatery, which specializes in French-inspired cuisine, is closed for the winter, but the inspiring views of the Red River are the stuff spring dreams are made of.

A bit less esoteric and a whole lot more wholesome, Florenceville-Bristol in New Brunswick is the planet's French Fry Capital, supplying one third of all fries around the world. Native sons built the first McCain Foods Limited French fry plant in town in 1957. The town is now home to the Potato World Museum.

Canada’s whiskies have been making waves and winning awards in the past few years, but one tipple that’s uniquely Canadian is Omerto, an aperitif tomato wine made by a boutique operation called Domaine de la Vallée du Bras in Charlevoix. The nation also does its part to keep up with the global craft beer scene. There’s been such a proliferation of interesting breweries operating in BC that the BC Craft Brewers Guild recently established the BC Ale Trail, an online guide that organized notable breweries into seven suggested road trips. Self-guided tours cover areas as diverse as the rugged Kootenay Rockies, the pastoral Comox Valley on Vancouver Island, and suburban Port Moody. The Trail guide links to accommodations and local attractions, as well as tips on signature pours at each brewery. You'll find options for walking, biking, or driving.

Alberta deserves a section of its own, not least because the tourism bureau has plotted out a road trip of some of the most distinctive and whimsical attractions that are the largest—if not only—in their respective class. To wit: it’s home to the largest mallard duck, which has a wingspan of 23 feet, and the world’s most massive working oil lamp, which is 42 feet high and looks like something out of a Mother Goose tale. It’s on display at what is arguably the region’s oddest museum: the Donalda & District Museum, which houses more than 900 kerosene lamps dating from the 1600s and the 1960s.

But Alberta doesn’t have a monopoly on Canada’s quirky attractions. The Calgary Stampede is known as the richest rodeo event in North America. Also in Calgary is Heritage Park, an interactive and nostalgic museum with displays that stretch back to Canadian life in the 1860s. It's Canada’s largest living historical village. The Town of Shediac in New Brunswick, the lobster capital of the world, lays claim to the world’s largest lobster, a sculpture that’s 35 feet long and 16 feet high. Question is, though, where’s the world’s biggest bowl of melted butter?