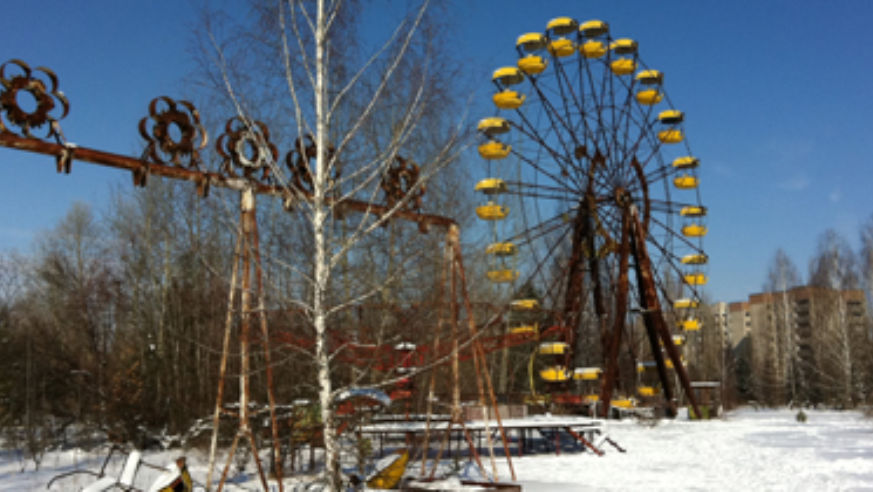 Courtesy Lionel Beehner
A Ferris wheel in Pripyat installed shortly before the 1986 accident that was never used. See more photos of Chernobyl.

The big yellow Ferris wheel sits idle; the bumper cars look frozen in suspended animation, as if they were abandoned mid-collision. So does the nearby school, whose cafeteria is littered with the detritus of dusty gas masks in case of nuclear war, its classrooms strewn with Cyrillic math textbooks and Soviet newspapers from the 1980s. A sign warns schoolchildren to save energy and heat.

Welcome to Pripyat, the Ukrainian town with the misfortune of sitting just miles from the world's most notorious nuclear power plant, Chernobyl. Twenty-five years ago this once heavily forested area bore the brunt of the world's deadliest nuclear power disaster, leaving untold victims who suffered from the radioactive fallout and ecological disaster in its wake.

Now it is one of Ukraine's most visited sites. Roughly 6,000 tourists—most of them Europeans—stream through this ghost town annually on private tours unsanctioned by the authorities. But starting this year, the government is also looking to cash in on the plant's notoriety, with plans to open up the zone to official tours, as well as boost its safety by building a giant concrete shell to encase the reactor by 2015.

After making the two-hour drive from Kiev, the tour kicks off in the no-frills office of the Ukrainian information agency. My guide, Yuri, points at color-coded maps of the radioactive fallout from the exclusion zone—or "dead zone"—a 30-kilometer radius that requires permits (and passports for foreigners) to enter. Next up is a drive-by photo op of the half-finished cooling towers and rusting nuclear reactors. There's an Iwo Jima-like statue devoted to the 29 firemen who died here, too.

Tourists tote around a yellow Geiger counter, which resembles a garage door opener and beeps incessantly as it measures the air's radiation. Levels can vary from as low as 10 microroentgens or one-millionth of a roentgen, in Pripyat (harmless), to 200 in front of Reactor No. 4. (possibly harmful with long-term exposure), the site of the meltdown.

"Only when it started beeping a lot was I scared," said Lina Selander, an artist visiting the nuclear zone from Sweden. "It's like Chernobyl's soundtrack."

The most surreal stop of the tour is Pripyat. There are no hazmat-like outfits or special masks necessary. The poplars do not glow from radiation. The town is an eerily mundane time capsule, buried in dust and left almost exactly as it was when its roughly 50,000 inhabitants were forced to flee in 1986. Tourists are allowed to roam relatively un-chaperoned through the necropolis' spooky remains of apartment blocs, a gymnasium, dance hall, swimming pool, and an Orwellian-eque Palace of Culture, whose peeling sky-blue paint and scattered broken glass feel like a Soviet version of the Titanic.

After the four-hour tour and a prison-style meal, visitors stand on a contraption that looks like a time machine. If it flashes green—no radiation—then you are good to go. On your way out of the exclusion zone, you (and your vehicle) must go through a similar radiation x-ray of sorts.

Tours are not cheap, running upwards of $150 for groups and $400 for individuals. Sergii Mirnyi, a commander of the radiation reconnaissance platoon that responded in 1986, accuses the government of "milking" the disaster for every last tourist dollar. He says the reactor should stand as a monument to ecological education.

"Chernobyl tourism," he told me, "undoubtedly can generate money. But I believe it can generate so much more."

What do you think? Would you go on a tour of Chernobyl? Do you support the fact that the government is offering tours of the region?

The government is expected to roll out official tours later this year. Until then, there are roughly a half dozen private companies offering tours in English. Visit tour2chernobyl.com or tourkiev.comfor more information.