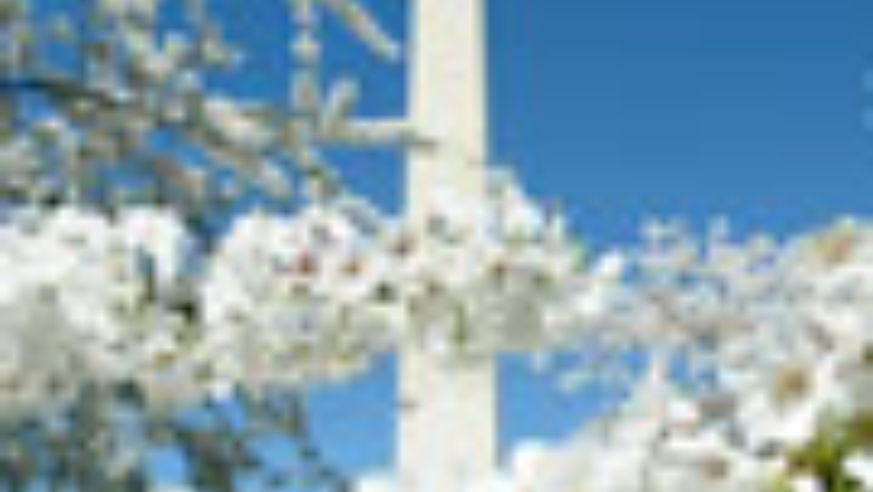 Heading to D.C. this year, along with about half a million others? Here's how to score your own semiprivate patch of blossom.

In late March and early April, a canopy of cherry blossoms opens over Washington, D.C., shedding delicate petals across the Tidal Basin. During the mass bloom, about half a million out-of-towners will join locals in raising their gazes to the tops of the trees, a 1912 gift from the city of Tokyo. (Global marketing minds might wonder: Coincidence, or clever strategy on behalf of Japanese camera makers? Snap once for yes, twice for no.)

To elude the throngs, skip the peak times (weekends, weekday rush hours, during the parade) and places (around the Jefferson Memorial and in East Potomac Park), and take a more crafty and creative approach.

Rise with the sun
The cherry blossom grounds never close, so you can visit during off-peak hours (read: when the rest of the city is asleep). Danielle Piacente, a National Cherry Blossom Festival spokeswoman, recommends arriving at dawn: "The views are incredible, and the crowds are minimal."

Take to the waters
Rent a paddleboat on the Tidal Basin (202/479-2426, tidalbasinpaddleboats.com, $10–$18 per hour) or explore the blossom-dappled shores of the Potomac River in a kayak, a canoe, or a Sunfish. Alternatively, leave the piloting to someone else by stepping aboard DC Cruises' 90-minute Cherry Blossom River Tours (dc-cruises.com, adults $24) or one of Entertainment Cruises' vessels, which offers an array of vessels and excursions (866/404-8439, entertainmentcruises.com, 45-minute ride from $18).

Reach new altitudes
Take in the view from atop the 555-foot-tall Washington Monument. Book tickets in advance or stand in line for same-day tickets—lines form as early as 7 a.m. (877/444-6777, nps.gov/wamo). Or head over to POV Roof Terrace, on the 11th floor of the new W Washington D.C., and raise a martini glass to the cherry treetops, glimpsing views privy to those with wings (202/661-2400, starwoodhotels.com).

Tromp around a garden of cherry delights
The U.S. National Arboretum covers its 446 acres with dogwoods, crape myrtle trees, a bonsai museum, and, best of all, a collection of cherry trees, including some hybrid species bred by staff scientists (202/245-2726, usna.usda.gov, free). From March 27 to April 11, take a self-guided tour of its flowering cherries. A taxi ride there from Union Station costs $7 to $9 for two. The closest Metro (subway) station is Stadium-Armory, with a transfer to the B2 Metrobus to Bladensburg Road.

Uncover a secret stash
Ditch the most popular viewing area around the Tidal Basin to find your own special grove. For example, cherry blossoms adorn the grounds of the Supreme Court and the large garden between the Smithsonian Castle and Independence Avenue. For a local's view, hail a cab to Foxhall Village, an elegant neighborhood of stately Tudor-style townhomes landscaped with cherry trees. A cab ride from the National Mall costs $10 to $12 for two. Tell the driver to drop you off at Foxhall Road NW and Greenwich Parkway NW. In nearby Georgetown, Dumbarton Oaks is also worth a visit. The site of a 1944 international conference in which delegates planned to create the United Nations, it presents a pre-Columbian art collection inside a pavilion designed by Philip Johnson and surrounded by terraced gardens with cherry trees (202/339-6401, doaks.org, garden admission $8 adults).