Have The Titanic Celebrations Gone Too Far? 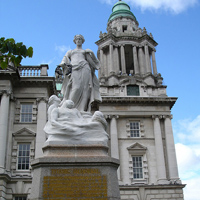 No travel disaster has been romanticized like the sinking of the Titanic. A slew of celebrations are scheduled for April 14, 2012 (the 100th anniversary of the sinking), but is it all in bad taste?

The 12-night Titanic Memorial Cruise that departs from Southampton, England on April 8th has already sold out, but there's still space available on a cruise departing New York on April 10th that arrives in Halifax, Nova Scotia in time for the 100th anniversary memorial service (many victims of the disaster are buried there). It then sails to the exact coordinates of the sinking. Inside staterooms start at $999.

If you don't want to commit to a cruise, but want to experience what it was like to be sailing in first class, it was just announced that an elaborate Titanic-themed dinner is planned for April 14 in New York. Only 80 seats will be available, with prices starting at $300.

Of course, if you are really just looking for the romance, Titanic the movie was recently re–released in 3—D.

What do you think? Are these celebrations tacky, or a fitting way to remember the disaster?

Is Disaster Tourism An Unavoidable Reality?

For island dreamers along the eastern seaboard, getting to Hawaii hasn't always been the easiest or most convenient journey. But according to research recently released by the Hawaii Tourism Authority, flight capacity from the East Coast to Hawaii should increase about 6.4 percent this year, at a time when capacity to many other vacation destinations is decreasing (Europe comes to mind). Hawaiian Airlines and JetBlue Airways in January announced a partnership under which travelers can combine travel on Hawaiian and JetBlue. And on June 5, Hawaiian is launching the only nonstop service between New York City and Hawaii on its new 294-passenger Airbus A330-200 aircraft. Hawaiian flight 51 will depart John F. Kennedy Airport’s Terminal 5 daily at 10:00 a.m. and arrive at Honolulu International Airport at 3:00 p.m. The return flight 50 will depart Honolulu daily at 3:05 p.m. and arrive in New York at 6:55 a.m. the following morning. East coast residents can connect to that flight from JetBlue destinations such as Boston, Buffalo, Charlotte, Fort Lauderdale, Orlando, and Raleigh/Durham. Additionally, United Airlines will begin daily year-round service between Washington/Dulles International Airport and Honolulu on June 7, 2012, which will be the only nonstop service between the two hubs. The flights will be operated on Boeing 767-400 aircraft. The new routes connecting New York and the nation's capital will dramatically improve the East Coast’s access to the Hawaiian Islands, but scheduled seats from the West Coast are also expected to increase 4.7 percent, due mainly to more Alaskan Airlines and Hawaiian Airlines flights. More from Budget Travel: 13 Things You Didn't Know About Hawaii Now Departing: NYC to Hawaii Nonstop for $212 Nonstop Flights Increasingly Make Unplanned Stops

Is Disaster Tourism an Unavoidable Reality?

It's like watching a train wreck. Wherever disaster and devastation strikes, tourists often can't help but to want to see the aftermath for themselves. Whether it is the Hurricane Katrina tours that cropped up in New Orleans, Ground Zero in New York, or tsunami destruction in Asia, the devastation becomes part of experiencing the destination, however morbid that may seem. The latest such disaster was the deadly Costa Concordia accident off the coast of the Italian island of Giglio, where the ship still remains, partially submerged. Multiple news outlets have reported that Tuscany tourism officials are encouraging travelers to visit the island as a "gesture of love" to help counter what they fear will be a drop-off in tourism following the incident. The capsized cruise ship raises the question of whether people will actually want to go to Giglio specifically to see the vessel with their own eyes, an image that has become so vivid to many, and to bare witness to what is in fact a rather rare maritime event. That people would want to see an event such as this, "I do think it's almost inevitable," said Sharr Prohaska, professor at New York University's Tisch Center for Hospitality and Tourism. "There are so many different types of travelers and there are those that are just curious." But Prohaska and others in the travel industry believe that while it's inevitable, disaster tourism, or dark tourism as it is also referred to, can be executed tastefully and educationally. Prohaska added that disaster tourism also raises awareness and often lends directly to voluntourism, whereby people who visit these sites then often want to be part of the solution, help with cleanup and recovery efforts, in part because they have witnessed it firsthand. "After Katrina, the tours that happened in the city were controversial because some people thought it was insensitive to have bus tours going through neighborhoods that were devastated," said Kelly Schulz of the New Orleans Convention and Visitors Bureau. But, "from a tourism standpoint, for us, after Katrina, the tours were a positive thing," she added, noting that the Katrina tours helped bring tourism and tourism dollars back to a city that was very much in need of aid. "And it also makes people want to help. One of the most positive things after Katrina was the whole voluntourism trend," said Schulz. What is your take on disaster tourism? Do you think people should be encouraged to visit Giglio to see the Costa Concordia wreckage if they so desire? Do you think that there are sites where disaster tourism is more appropriate than others? Let us know by commenting below. More from Budget Travel: Are you Less Likely to Cruise? Cruise Lines Address Safety Standards In Concordia Aftermath Cruise Industry Changes Safety Drills

Rental Cars May Soon Be Safer Thanks to an Angry Mom

Yesterday America's largest rental car chain, Enterprise, took the surprise step of backing a plan for tougher government regulation of its industry. Earlier this week, Hertz, the nation's second largest chain, made the same about-face. Both companies caved into pressure from activists, an online petition signed by more than 130,000 consumers, and one very determined mother. First, the backstory: Eight years ago, Cally Houck of Ojai, Calif., learned that her daughters Raechel, 24, and Jacqueline, 20, had died in a fiery crash while driving a PT Cruiser from Enterprise. Tragically, an unrepaired safety defect caused the accident. The model had been under recall to be fixed. Houck sued Enterprise and in 2010 won damages for negligence, as ABC News has reported. But Enterprise said it would not change its policy about continuing to rent autos under safety recall. Due to a legal loophole, rental car companies like Enterprise are not required to take out of service recalled cars. So Houck put her life on hold and joined with activists at Consumers for Auto Reliability and Safety (CARS) to campaign for a law to force rental car companies to sideline recalled cars until they're repaired. What began as the passion of a handful of people slowly morphed into a grassroots movement. In the past few days, more than 130,000 Americans signed a petition for a new law to stop so-called "rental car roulette." This week, after hundreds of hours of volunteer effort, Houck and CAARS scored big: In response to public outcry, Hertz and Enterprise announced they would "ask Congress to put recall oversight of the industry under the National Highway Traffic Safety Administration," in the words of USA Today. Both companies insist that they observe solid safety practices and have stellar track records in providing safe autos to their customers. The companies argue that not every safety recall issued by the National Highway Traffic Safety Administration deserves an emergency response, given that some are for minor repairs. For instance, in a policy that is standard for the industry as a whole, Dollar Thrifty says in a public statement: "Dollar Thrifty's Vehicle Safety Team evaluates safety recall notices to determine if a Hard Ground Response (i.e. vehicle not rented until vehicle is remedied), a Normal Response (i.e. defect remedied at next maintenance event), or a customized response is warranted...Based upon information in the recall notice and additional consultation with the relevant manufacturer, Dollar Thrifty draws distinctions between safety recalls based on the degree of safety risk posed by the defect." Even with these victories in hand, Houck and company still have battles ahead to get Congress to pass the legislation. Early next week, an amendment with the same provisions is expected to be added to a surface transportation bill in the Senate, reports USA Today. It's a fight that travelers nationwide will be watching closely. SEE MORE FROM BUDGET TRAVEL Rental Cars: Which Ones Are the Safest Rental Cars: The Safety Mistake Travelers Often Make Highest-Ever $22 Billion Collected by Rental Car Companies in 2011

At HotelHaiku.com, everything you need to know about a hotel is described in 17 syllables. That's the premise anyway. Or perhaps "gimmick" is the more appropriate word? HotelHaiku is a niche site that highlights highly unusual hotels around the world, and yes, the write-ups of each property consist solely of a traditional three-line haiku poem: five syllables, seven syllables, five syllables. As of now there are over 70 hotels listed on the site. For instance, there's 9 Hours, an ultra-modern capsule hotel in Kyoto, Japan, described here: Check-in then shower / Fall asleep in your capsule / Prepare then check-out Maybe that's enough of a description for some travelers. Well, that and, presumably, the implicit endorsement of the tastemakers at HotelHaiku. In our recent "World's Weirdest Hotels" feature, though, you'd learn a lot more about this same property, including that it has "amenities you would expect from a four-star hotel (rain-forest showerheads, complimentary mineral water, pillows specially designed to ensure healthy posture during sleep)." Also, that "each capsule includes a computerized-lighting/alarm-clock system to facilitate sleeping and waking." Sweden's Treehotel also gets the haiku treatment: Nesting with the birds / In the forest canopy / Where tree lovers flock That one's also in our "Weird" story, only with a whole lot more detail. Here's some: Fixed about 20 feet up in the trees of the Harads woods are five separate "rooms" that each offer distinct tree-house experiences. The Bird's Nest is exactly what it sounds like, with a wild twig exterior on grand scale. The Mirrorcube is a square unit that reflects its surroundings, doubling as a kind of forest camouflage. (Bird lovers, don't fret—it's covered in an infrared film that's visible to our feathered friends, to avoid crashes.) The UFO evokes a spinning spaceship from just about any '60s sci-fi movie. Each structure is only accessible by an individual ladder, staircase, or bridge, so to wander among them is to stroll the forest floor. Even so, HotelHaiku is a neat starting point for tracking down one-of-a-kind lodging. If you're bored by cookie-cutter chain hotels, give the site a look. Just don't end your research there, obviously. UnusualHotelsoftheWorld is another good resource, as is our "World's Weirdest Hotels" feature and our Hotels section as a whole. MORE FROM BUDGET TRAVEL: World's Weirdest Hotels The Dirty Truth About Hotel Ratings 26 Gorgeous Hotels You Won't Believe Are Under $150