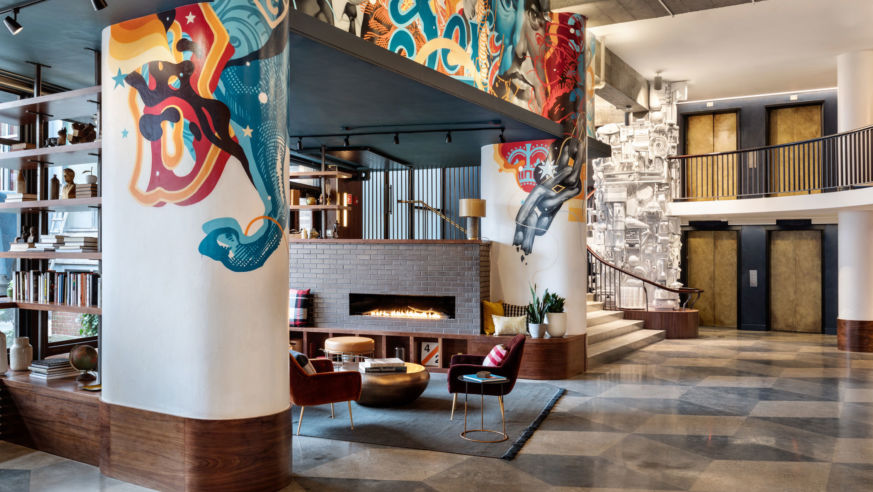 Engaging design and a laid-back vibe define this boutique hotel, an homage to Boston's history of innovation.

In the lobby of the Revolution Hotel, there’s a vibrant mural by Tristan Eaton, a well-known West Coast artist. It features JFK, Paul Revere, and all the other individuals that people associate with Boston. But what catches your eye first when you walk in is the white tower in the back of the lobby. It’s a cleverly arranged assemblage of telephones, typewriters, lawn flamingos, a Polaroid camera, Converse sneakers, Bose stereos, and more, all painted white and affixed to a wide column. These seemingly random objects have one thing in common: They were all invented or created in Massachusetts. This hotel, which opened in December 2018, telegraphs a very clear message: Revolutions in the Bay State are not limited in the colonists. It’s a region that cherishes invention, innovation, and disruption.

In 1908, the building at 40 Berkeley Street opened as a YWCA, a sanctuary for women working to get their lives in order. In 2018, after a massive overhaul, it opened as a hotel. In addition to the aforementioned lobby design, all things Massachusetts extends to the lower garden level, a work or hangout area for guests around the clock and a co-working space by day (more on that in a minute). Adorned with photographs of Jack Kerouac, Donna Summer, John F. Kennedy, Tom Brady (of course), and dozens more, an expansive wall that's a veritable who's who of Massachusetts notables.

There are several room sizes and bed options among the hotel’s 177 rooms, but they all fall under one of two categories: Some have in-room bathrooms and others require a walk down the hall to a shared bathroom, which isn’t what you’re likely envisioning. The shared facility has the look of a locker room in a high-end gym, with private compartments containing a shower and toilet and linens neatly arranged for the taking. Rooms without bathrooms feature rubber totes for guests to carry their toiletries down the hall. There are three styles: one king-size bed, one king-size and a lofted twin, and a “quad” with two bunk beds and plenty of outlets within reach of each, an ideal arrangement for friends traveling together. These rooms all come with a desk. Bath-in-room guestrooms do not have a desk.

Rooms are compact and space-efficient with well-integrated storage space. Each is equipped with a safe, and all the requisite high-tech amenities, like LCD televisions and a small bedside Tivoli radio that boasts sound quality worthy of a much bigger stereo. Lather bamboo-lemongrass soaps, shampoo, and conditioner in the showers are large pump bottles, a clever eco-minded choice. Wi-fi is complimentary.

The company also runs the Revolution Lofts next door, which feature bigger suite-style rooms, each with a bathroom and kitchenette space with a stove, sink, fridge, plates, and utensils.

The hotel is located a few short blocks from Tremont Street, the main artery of the restaurant-dense South End. The neighborhood features a tremendous Whole Foods (allegedly New England’s largest), and a sizable variety of boutiques, trendy eateries, and lively bars. A 10-minute walk in the other direction lands you in Copley Square, the buzzy green space surrounded by the historic Fairmont Copley Plaza hotel, the iconic Trinity Church, and a shopping mall with a roster of familiar stores. One block beyond that is Newbury Street, Boston’s famous retail strip. The hotel is an easy walk to the Back Bay station on the Orange Line and the Arlington Station on the Green Line. If you're heading to or from the airport or the bus/train station, Both the airport and the bus/train station require only one transfer from the Orange or Green lines.

A small café counter in the lobby serves complimentary coffee from 7 a.m. to 10 a.m. and sells all sorts of pastries, coffee, and espresso drinks throughout the day. A restaurant is scheduled to open this summer, but in the meantime, it’s close enough to a range of notable local eateries that its absence is easily forgivable.

The hotel’s lower garden level is a spacious room with ample tables, each equipped with plenty of outlets for anyone wanting to hunker down for a few hours. During the day, it serves as a laid-back coworking space that non-guests can use with the purchase of a pass for a day, week, or month. The 24-hour gym, on the same level, is an exercise, if you will, in well-curated fitness spaces. Small yet comprehensive, it features weights, a treadmill, a Peloton bike, and more.