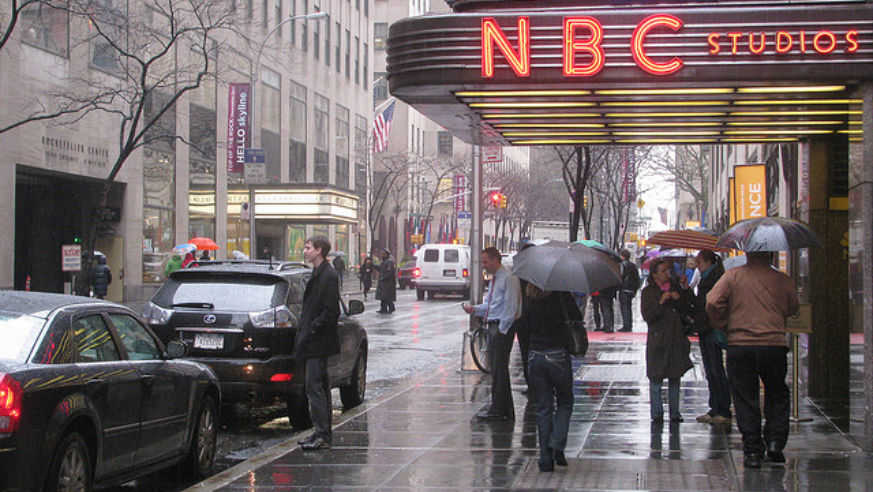 How would you like your next trip to New York or L.A. to include a guaranteed celebrity sighting and a live performance by a popular musician or comedian? With a little patience, a little planning, and in some cases, a little luck, you can get all of that—wait for it—for free. Here's our ultimate guide to snagging tickets for seven popular late-night shows—with a cheat sheet to help you figure out which ones will be easiest to get your hands on. And just in case it didn't sink in the first time: they're all free.

Now four–and–a–half years old, Late Night With Jimmy Fallon (weeknights, 12:35 ET on NBC) has become an Emmy–nominated fan favorite. Tickets are relatively accessible: you can request tickets for up to four people by calling 212-664-3056, at least four to six weeks before the show you'd like to attend. Not bad for a talk show that also includes a nightly set by The Roots. You can also try the standby line for same-day tickets, which are handed out based on availability at 9am (on taping days only) under the NBC Studios marquee on 49th Street, between 5th and 6th Avenues. For more information:Visit this websiteto learn more about free show tapings, how to see Jimmy Fallon's monologue rehearsal, and how to score a spot in the "Band Bench," a special section reserved for huge fans of the show's musical guest.

Within the space of a couple of months last season, Lady Gaga, Helen Mirren, and Elton John graced Saturday Night Live's stage—even on an "off" night, it shouldn't be a surprise that the landmark program (Saturdays, 11:30 ET on NBC) remains one of the hottest tickets in town. Know ahead of time that it is challenging to get a spot—but not impossible, so keep hope alive. There are two ways of going about it: Sign up for the show's lottery system during the month of August by sending an email to snltickets@nbcuni.com—lucky applicants will receive two tickets to either a live show or a dress rehearsal. The second way to get tickets is to wait in the show's standby line under the NBC marquee (featured in the show's opening credits) on 49th Street, between 5th and 6th Avenues. Tickets are given out Saturdays (during taping weeks) at 7am, limited to one per person, and good for either then 8 p.m. dress rehearsal or the 11:30 p.m. live broadcast. Sure, it's early, but you can get a jump-start on sightseeing at nearby MoMa, Central Park, Fifth Avenue, and of course, 30 Rock itself. For more information:Visit this websitefor more info on getting tickets to several NBC shows, including SNL, America's Got Talent, Late Night with Jimmy Fallon, and The Tonight Show with Jay Leno.

It's the most-watched late night show among 18-49 year olds; it's the winner of fourteen Emmys, thirteen of them back-to-back; its host has been voted "America's most trusted newscaster." Even the fact that The Daily Show (Mon.–Thu., 11pm ET on Comedy Central) tapes every day—usually an advantage in ticket-scoring potential—doesn't do much to increase the wishful fan's odds. The program's website makes no bones about it: "Unfortunately, there are no tickets to see The Daily Show with Jon Stewart at this time," it announces, laying down a virtual velvet rope. It turns out that your best bet is following the advice on that discouraging landing page and signing up for the show's email update list. Yes, such lists often lead you to a black hole of uncertainty and spam, but it helps to have a little bit of insight into how the ticketing system works. A representative for the network tells us that tickets, once available, are released every Friday (aside from days when the staff is out of the office) between 11 a.m. and 12 p.m. Each time this happens, announcements are made to the email list recipients, and also via the show's Facebook and Twitter pages. Those on the email list will also have the best chance of snagging a spot from someone who's canceled their reservation, which can happen "any day, at any time." So in other words, watch your inbox and Facebook/Twitter feeds like a hawk. For more information:thedailyshow.com/tickets.

A fixture on just about every big movie's press tour, Jimmy Kimmel Live! (weeknights, 12am ET on ABC) pulls in marquee names several nights a week. You can sign up for tickets at 1iota.com, which bills itself as a provider of "free tickets for fans." You'll need to register for a free account and choose the date you'd like to attend. 1iota.com conveniently lists confirmed guests for each date, and Jimmy Kimmel headliners appearing in the near future are often visible. If you live in L.A. (or just happen to be visiting) and spontaneity strikes, there is also a same-day ticket request hotline that you can call (323/570-0096). If a ticketed guest cancels their reservation, or the showrunners have extra seats to fill, it might be your lucky day. For more Information:1iota.com

1iota.com also handles ticketing for this freewheeling entry in the late–night canon (weeknights, 12:37am ET on CBS). The Late Late Show is often considered an underrated gem, and ticket availability reflects that—spots are more accessible than those for 1ota's other late–night heavyweight, Jimmy Kimmel Live. One catch: for the most part, you're not able to see who the guests are going to be. However, with Dick Van Dyke, Kristen Bell, and Hugh Laurie among the recent and upcoming guests, the chances of a pleasant surprise are pretty high. For more information: 1iota.com

Conan O'Brien's high-profile scuffle with NBC may have set him up as an underdog, but you wouldn't know it from the ticket availability for Conan (weeknights, 11pm ET on TBS). As with Saturday Night Live, there are two ways to root for Team Coco in person: through a lottery, and through the standby system. To sign up for the lottery, you will need to choose the date you would like to attend in advance (once you've made your initial selection, it can't be changed). You can follow Team Coco's Facebook page or Twitter feedto be alerted when new dates become available. Standby tickets (with a cap on two tickets per person) are also given out on the second floor of the studio's parking structure every taping morning at 10 a.m. (sounds shady, we know—but this is confirmed by the show's press representative and on its official site). Getting a ticket here is the first stage of the standby process—you'll also need to check back in that afternoon to see if your ticket will get you in. For more information:teamcoco.com/tickets.

It's definitely cheaper to catch Chelsea at her talk show (weeknights, 11pm ET on E!), than one of her standup appearances—and it just might be easier, too. Tickets for Chelsea Lately are released through On Camera Audiencesevery Monday—staffer Kate tells us that it's best to reserve a spot that day, as they tend to sell out towards the end of the week. You can sign up for the date that you'd like to attend (up to 60 days in advance), reserving up to four tickets at a time. For more information:http://on-camera-audiences.com/shows/Chelsea_Lately

Just want to see something? We're told that game shows, while not guaranteed, are usually the easiest tapings to reserve (The Price Is Right, Let's Make a Deal—both in Los Angeles—and Family Feud—which tapes in Atlanta—are among the game shows that On Camera Audiences coordinates). The toughest to see? Unsurprisingly, the juggernauts like American Idol and So You Think You Can Dance. Even these aren't out of the realm of possibility for the patient fan, though—"it can take a year or more, but people think tickets for these shows are impossible to get—if you join the wait list, they're not," says Kate. For more Information:on-camera-audiences.com.