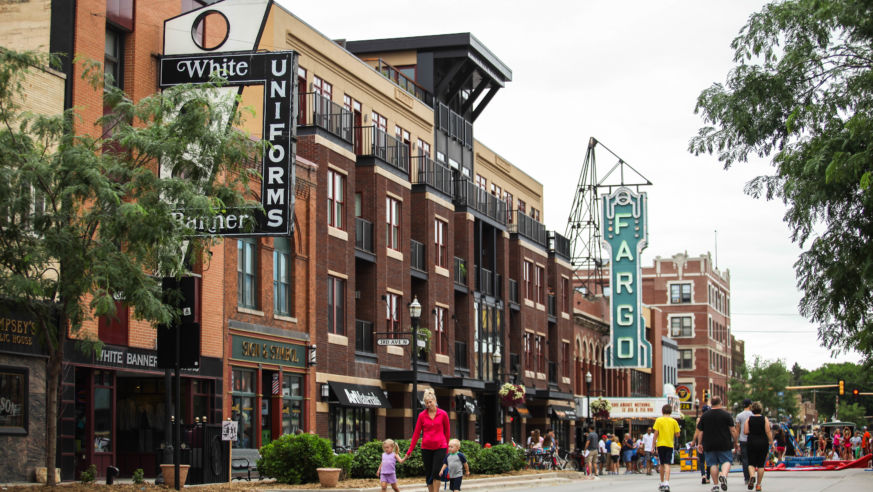 There's no better guide to a city than someone who lives there, so we asked a local author and photographer for her take on culture, food and drink on the town she calls home.

If you’re a student of American trivia, you might know that Fargo, North Dakota’s most populous town, which sits on the Red River Valley of the Great Plains, is named for William Fargo, the founder of the Wells Fargo Express Company. Or you might know that it was referred to as the “Gateway to the West” once the Northern Pacific Railroad was up and running through the area. Or that it was essentially rebuilt after a massive fire decimated 31 downtown blocks in 1893. But chances are everything you know about Fargo you owe to filmmakers Joel and Ethan Coen, whose 1996 kooky crime drama (and present FX series of the same name) gave the town pop culture street cred. Today, Fargo is an energetic hub of creativity with a youthful vibe. In 2014, Forbes magazine ranked it number four among the fastest-growing small towns in the US. To get the lowdown the town, we checked in with Alicia Underlee Nelson, who curates Prairiestylefile.com, a site that focuses on what's unique and local in the upper Midwest and Canada's prairie provinces. She's also the author of “North Dakota Beer: A Heady History.” She grew up about 45 minutes away and just moved back after 12 years in Minneapolis. She’s seen the difference the relatively few years can make.

Fargo’s amazingly well-preserved downtown has undergone changes in the past few years, but none of them have impinged on its historic integrity. Where people once went there for basic shopping needs, it’s evolved into an arts and culture district. The Plains Museum is a major local art institution, what with its collection of 20th and 21st century works. But Alicia always tells people to hit the various galleries when they come to town. Gallery 4, which was established in the 1970s and is one of the oldest coops in town, and the sweeping Ecce Gallery have great openings each month, Alicia notes. Translation? Free party. Both feature regional artists and bill themselves as springboards for new talent. But art here is not constrained to the confines of four walls. Or passive viewing, for that matter. Anyone who has chalk or pastels or spray paint can make his mark on the public art wall, a blast of color tucked away in an alley. “Basically, there are very few rules,” Alicia says about it.

There’s a longstanding local pride in time-honored crafts here, too.

“North Dakota is not pretentious at all. We’re super-open and welcoming and friendly. There’s a strong tradition of craftsmanship here. A lot of people quilt and paint and make their own furniture. There’s a real appreciation for people who make art,” she says. But if classics crafts aren’t your thing, she’ll point you to Unglued, a shop where you can pick up any and all kinds of modern indie crafts from region. Case in point: upcycled bowties by local artist Ashley N. Dedan, who makes accessories with clothing scraps under the label Aendee. Alicia also recommends downtown institution Zandbroz, a mashup of a bookstore, a variety shop, and jewelry purveyor. Browsing around here might seem akin to poking around a museum of curios. Or you could pick up some local goodies at Sweet Dreams Confections. Go for the homemade fudge, gelato, and sodas, stay for the from-scratch soup and salad at the shop's cozy, chill coffee bar.

Maybe the Coen brothers, who are known for their wacky, if often dark, sense of humor, were drawn to Fargo for its quirk factor, and there are indeed a few unusual places to visit. Alicia calls out Scheels, an outpost of a national sporting goods chain, but this locale features an indoor ferris wheel, shooting games, and--wait for it….. statues of US presidents.

“You can go for a ferris wheel ride in the middle of winter. You wouldn’t think it if you were going in to buy basketball shorts, but you can. It’s a strange place,” she said, noting that you might spot a bride and groom getting their wedding photos taken there. It’s also the place to go for North Dakota State University gear. The team plays across the street in the Fargodome, but regardless of whether you’re a football fan, if you’re in town during a weekend game, make sure to hit the tailgate party. “It’s seriously one of the best parties in town. There’s a marching band and free games. Plenty of people don’t go to games, they just go to hang out.”

The creative vibe shines through in the restaurants here, too. Rhombus Guys Pizza might throw you for a loop if you go in expecting you basic average pie. Among their extensive veggie pie options is the tater tots hot dish pizza, which Alicia swears is better than a plate of perfectly fried tater tots. Its upstairs patio is another reason it’s worth visiting. Locals here are obsessed with their patios in the warmer months, which Alicia attributes to the winters being treacherous. Blackbird sits on the slightly less eccentric side, offering wood-fired pizzas that are locally minded down to the flour. (“The guy’s obsessed with dough,” Alicia says.)

For something a bit more high-end, Mezzaluna comes highly recommended. But despite its fine dining appeal, the restaurant also offers excellent late-night happy hour regularly and a midnight brunch on occasion in the colder months. “They announce it online, and it’s worth stalking their website for when they announce it.”

Speaking of late-night, no matter how fun it is to get caught up in the hype of trendy restaurants, diners remain a beloved here. Krolls Diner, an outpost of a small chain, is a retro dining car where you can kick back in a sparkly booth and order classic diner grub or German staples, like the beloved knoefla soup. The fact that its website is www.sitdownandeat.com should cue you in to the light humored attitude of this joint and its heavy food. German food is also the star at Wurst Bier Hall, which has tons of beers on tap and communal tables.

When your sweet tooth gets the best of you, the best dessert in town are found at Sandy's Donuts, which has two locations in town.

“Everyone says their own donut place is the best, but this really is,” Alicia declares. “Just get there early,” she advises. The flavors rotate all the time and include special creations for game days and holidays. There’s also an impressive lunch menu of salads and hot and cold sandwiches at the downtown location. And best of all, each meal comes with a free donut.

In summer 2017, Alicia published her book "North Dakota Beer," so she is intimately acquainted with craft brewers in her hometown and beyond. For an understanding of what’s become a strong craft beer scene in North Dakota, you’ll want to pay a visit to Fargo Brewing Company, the first in town. Located about a 10 minute walk north of downtown, it remains a local favorite, drawing people not only for the excellent beer, but also for the food trucks, the chill industrial vibe, and frequent tasting events. Then later, in 2016, they opened Fargo Brewing Company Ale House in South Fargo where they serve food designed to pair with their brews as well as some quirky bites that only true suds lovers could dream up. Case in point: an ice cream sandwich with the cookie part made with spent grains from the brewery.

Drekker Brewing, located right downtown, has a more polished appearance. Alicia recommends taking their grain-to-glass tour, not least because all the proceeds go to charity. The brewers’ interest in artistry extends far beyond beer. Local art adorns the walls in the taproom as well as their packaging. (One of Alicia’s favorite local artists, Punchgut, created the dynamic graffiti-style cans for the brewers.) They also host live music each weekend, game nights, and late-night craft fairs. Needless to say, it’s a lively hangout. And although they only have a small snacks menu, you can plan to stay for a while since they encourage ordering from outside restaurants.

Kilstone Brewing is less flashy and more tucked away in a low-profile space in an industrial near the interstate highway. Once you’re inside, though, Alicia says it’s really accessible and, what’s more, "they rock bingo," she declares.

Speaking of tucked away, if cocktails are more your speed, The Boiler Room is a chill hotspot that draws revelers for its craft cocktails and creative American fare. The basement locale, which you enter through a back alley, also offers cocktail classes.