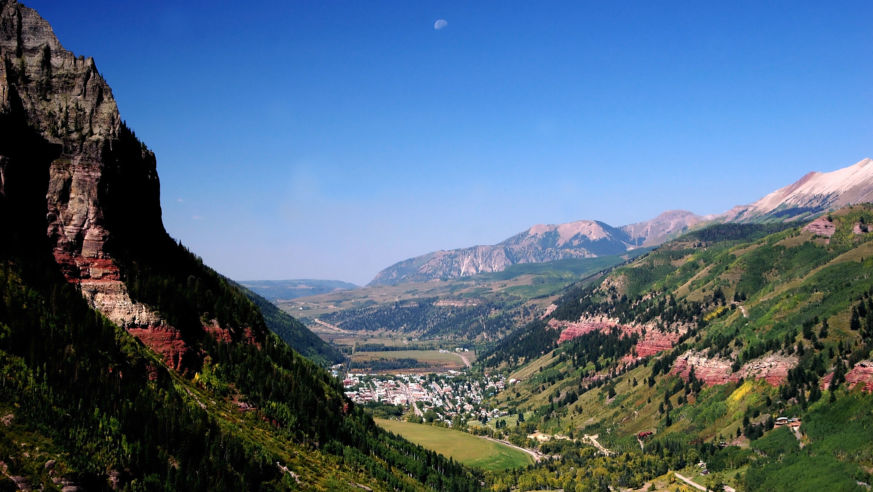 There's no better guide to a city than someone who lives there, so we asked Eliza Gavin, chef, restaurant owner, and Bravo Top Chef, for her take on culture, food, and drink in the town she calls home.

Mention Telluride to anyone and chances are they’ll immediately think of an elite ski town full of second homes and all the things hedge fund dreams are made of. But there’s far more to this picturesque village nestled at 8,800 feet above sea level in the Colorado Rockies. Old Western fanatics will tell you that Butch Cassidy robbed his first bank here. Architecture junkies will tell you it’s chockablock of Victorian homes and it was illuminated by streetlights before Paris. Entertainment historians will tell you that Lillian Gish played shows there. And scholars of American history will tell you that at the turn of the 20th century, there were more millionaires per capita there than Manhattan. By the 1960s, however, due to the slowdown of the local mining industry, the boom started to go bust. Thanks in large part to entrepreneurial developer and hotelier Joseph Zoline, who leveraged the area’s exquisite mountains and built up the local ski industry in the late 1960s, Telluride underwent a renaissance and got its glitzy groove back. But beyond the allure of its ski runs, Telluride is actually just a small town of about 20 by 15 blocks. In the off-season its population is around 3,000 and it draws all sorts of artists, festival followers, nature lovers, and culinary-minded vacationers, giving it an energy that suits travelers of all stripes.

We recently checked in with Eliza Gavin, owner of and chef at 221 South Oak since 2000, to learn a bit about what goes on in town today. She’s the chef owner at 221, a restaurant she’s owned since 2000, but you might recognize her from season 10 of Top Chef, which aired in 2012. As a native of Telluride for 20 years, she's seen the town change and grow. Here's where she recommends you go when you visit.

TRAILS FOR STROLLING, HIKING, AND SKIING

Telluride is essentially located in a canyon surrounded by southwestern Colorado’s San Juan Mountains, which are as high as 13,000 feet. Waterfalls abound. There’s a tangle of trails across mountains and flatter lands that lure hikers, bikers, and anyone else who loves spending time outdoors. With so many different paths to take, it helps to have someone familiar with the landscape to offer tips. Eliza, who’s done her fair share of exploring, has the low-down on what to expect on different trails.

Beginners and anyone just wanting a casual stroll would be best off on Bear Creek. It’s not strenuous, Eliza says, and it’s manageable to go off-trail if the urge to wander strikes. Anyone seeking more intensity should try Jud Wiebe, a three-mile loop that’s pretty much a straight shot up and a straight shot down. And for a completely different experience, hop in a car and head to Ouray, about 40 minutes away. Those who travel will be richly rewarded with hot springs and waterslides.

And, of course, there are the famous ski trails, which offer world-class terrain regardless of your experience or ability, not to mention different options with regards getting to the top of the mountain via lift or hike. In addition to the slopes, though, Eliza raves about Terrain Park, a veritable winter playground of man-made jumps where kids flips and spins.

Yes, Telluride’s reputation is built largely on adrenaline-fueled afternoons, but plenty of people here snap on skis for a cross-country expedition. It’s so embedded in the local culture, in fact, that there are Nordic tracks in the town park as well as an area known as The Valley Floor, a giant swath of land cut through by a river. Very generous donors paid nearly $50 million to have it condemned so that nothing can ever be built on it. In 2017 it celebrated its ten year anniversary as a public space that locals love for mountain biking, cross-country skiing, and elk-spotting.

The one thing to know about Telluride before you go is that when people refer to it, they're generally referring to the adjacent towns of Telluride and Mountain Village. Mountain Village is the ski-hub and Telluride is more of the town. A 14-minute free gondola ride shuttles people back and forth between the two. There are also free buses if heights aren't your thing.

A visit in the spring or summer is rewarded with all kinds of outdoor spaces above and beyond the hiking trails, like skate parks and bike trails along the river. "There's so much freedom in the summer," Eliza says. "Everyone walks everywhere. It's really safe."

And then there are the festivals. There's pretty much something every weekend, she says. Among the arts and music happenings, the Bluegrass Festival brings in up to 12,000 music lovers each June. Then there are other events that can't really be classified, like the Nothing Festival, a summer occurrence when everyone bikes through town without clothes. Seriously.

In addition for being known for its elegant and creative seasonal New American dishes, 221 South Oak, Eliza’s restaurant, is popular for the appetizer and wine and pairing classes she offers on a regular and by-request basis. It’s quite an extravaganza: over the three-hour session, she prepares up to 14 dishes and pairs them with eight or 10 wines. Or cocktails. The options are endless. She explains the different varietals and the philosophies behind which wine compliments what food. But don’t expect your familiar dishes. Eliza prefers to use what she calls “weird ingredients,” like kaffir lime leaves and nutritional yeast.

So where does this topnotch chef eat in her off-time? No town where creative people dwell would be complete without tacos. The go-to here is Tacos del Gnar, which Eliza loves for its creative concoctions, like the sloppy joe taco and tater tots with queso. For sushi, it’s Pescato, which, in a quirky turn of events, spotlights Indian food each Wednesday.

Even chefs at the world’s highest end fine dining restaurants knows how to appreciate pub grub. In Telluride, Smuggler’s Brew Pub is the name of the game. The staples at this gastropub (which happen to also be Eliza’s top picks on the menu) are the pulled lamb sliders, crawfish mac’n’cheese, and fried pickles. They brew their own beer, she’s quick to note. She also recommends hitting Last Dollar Saloon (AKA: “the Buck"), a “local, lovely corner spot on Main Street with a cozy retro look," she says, complete with lacquered wood, a pressed tin ceiling, pool tables, and foozball. More importantly, though, it boasts the city’s largest beer selection, offering up to 60 beers. Eliza appreciates all those assets, but most impressive of all is the fact that each night, one of the three owners—Moussa, Jay, Michael—can be found working the bar, giving it a truly neighborhood feel.

Speaking of beer, Telluride Brewing Company is a must for anyone who loves beer. (And chances are, if you’re the type of person who plans a vacation to Colorado, you likely love beer. There are, after all, 348 in the state as of May 2017. That’s roughly six breweries for every 100,000 people) It’s eight miles outside the city, and more than worth the trip, Eliza ensures. But if you don’t take her word for it, consider the many awards they've won over the years at the annual Great American Beer Festival. They don't have formal tours, she notes, but they always welcome visitors. "You just go in and they're like, 'Hi! You wanna look around? You want a tour?' They’re just very friendly and fun." As further evidence of their obsession with fun, they participate in the Telluride Blues and Brews festival each September.

Right about now it’s worth noting that Colorado was the first state to legalize recreational marijuana in 2012 (with Washington) and its dispensaries have been a tourist attraction since that went into place. When Eliza sees tourists wandering through town staring at their phones, chances are they’re looking for the weed stores. There’s six dispensaries and though Eliza doesn’t partake, she says it’s not hard to find someone in town who can recommend which has a better inventory than the rest.