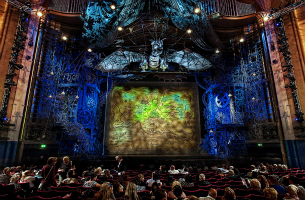 Hoping to catch a West End show during your winter stay in London? Perhaps a major musical, like Billy Elliot or Mamma Mia? You better book now. More than 50 productions—including opera tickets, for the first time—were put on sale yesterday until they sell out. Prices range from £10 ($15.50) to £35 ($55) at GetIntoLondonTheatre.co.uk.

Here is a sampling of the hot shows. Discounted performances run from January 1 through February 18, but standard price performances are available on other dates.

AN IDEAL HUSBAND
Vaudeville Theatre has revived Oscar Wilde's "An Ideal Husband," with the help of husband and wife team Alexander Hanson and Samantha Bond, acting together for the first time. The play, from 1895, follows a politician who has made a fortune from what we would now call insider trading. The script is Wilde, so cutting put-downs and high melodrama are on sumptuous display. (Vaudeville Theatre, 404 Strand, until Jan. 31.)

The Royal Shakespeare Company is famous for staging productions of classic plays, but it is less well known for its dance performances, which are equally well regarded. Opened last week, the RSC's balletic version of "Romeo and Juliet" stars Mariah Gale and Sam Troughton, who dance to choreography by Nureyev and music by Prokofiev. RSC has taken up residency for the near term at the Roundhouse Theatre, where the audience sits in a semi-circle around the stage. (The discounted performances are at London Coliseum, St Martin's Lane, from Jan. 11–13, 2011, but performances are otherwise at the Roundhouse Chalk Farm Rd.)

A FLEA IN HER EAR

Georges Feydeau's 1907 rollicking, old-style farce, directed by Richard Eyre, takes place in posh 1880s Paris. A woman suspects her husband of cheating on her and sets a trap to catch him at it. Hijinks ensue. Reviewers say this production by the Old Vic, the theater company run by Kevin Spacey, is superbly entertaining. (Old Vic, The Cut, discounts through Feb. 18; show runs until March.)

For theater tickets, is the Leicester Square discount ticket booth, TKTS, worth it?

How to keep a teenager entertained on a visit to London?