Loaded with history, nature and family-friendly entertainment, New England is prime road-tripping country. Here's an itinerary of our favorite stops

The United States start in these six rugged states. And when British explorer Captain John Smith explored New England’s shores in the early 1600s, he grasped the charm and resilience of his surroundings – and officially made it the birthplace of a nation.

Of course, in addition to all its fascinating history, this northeast corner of the country is a hotbed of beautiful nature, culture and family-friendly entertainment – encompassing a spectacular culinary scene and a wide variety of affordable accommodations to discover and enjoy.

Want to spend more time exploring this diverse and distinct region? Here’s a blueprint to a reasonably priced road trip in New England – from Portland, Maine, to Mystic, Connecticut. From winding trails of the Appalachian Mountains, including eight mountains over 14,000ft in elevation, to the splendor of New Hampshire’s wild coastlines, you won’t have to miss a thing.

Come for the lobster, stay for… well, everything else. Portland might be Maine’s largest city, but you’ll be able to appreciate the craggy shorelines and secluded beaches as well as the preservation of the historic, yet quaint, Old Port district. The stunningly well-kept Portland Head Light is the oldest lighthouse in the state and is surrounded by the 90-acre Fort Williams Park, where you can hike, bike, picnic or sit by the beach.

Ready for some culture? The Tate House Museum whisks you to Maine’s pre-revolutionary times, and the Portland Museum of Art, founded in 1882, is sprawled over three buildings – one designed by the late “starchitect” I.M. Pei. The dining scene is vibrant, and you can indulge in inventive small plates at Central Provisions, where most entrees are under $15, and $6 craft cocktails at the Portland Hunt + Alpine Club’s Happy Hour. Of course, if its seafood you’re after, don’t miss the brown butter lobster roll at Eventide Oyster Co. The Press Hotel offers fun, boutique accommodations in the same building which housed the Portland Press Herald until the newspaper moved offices in 2010. 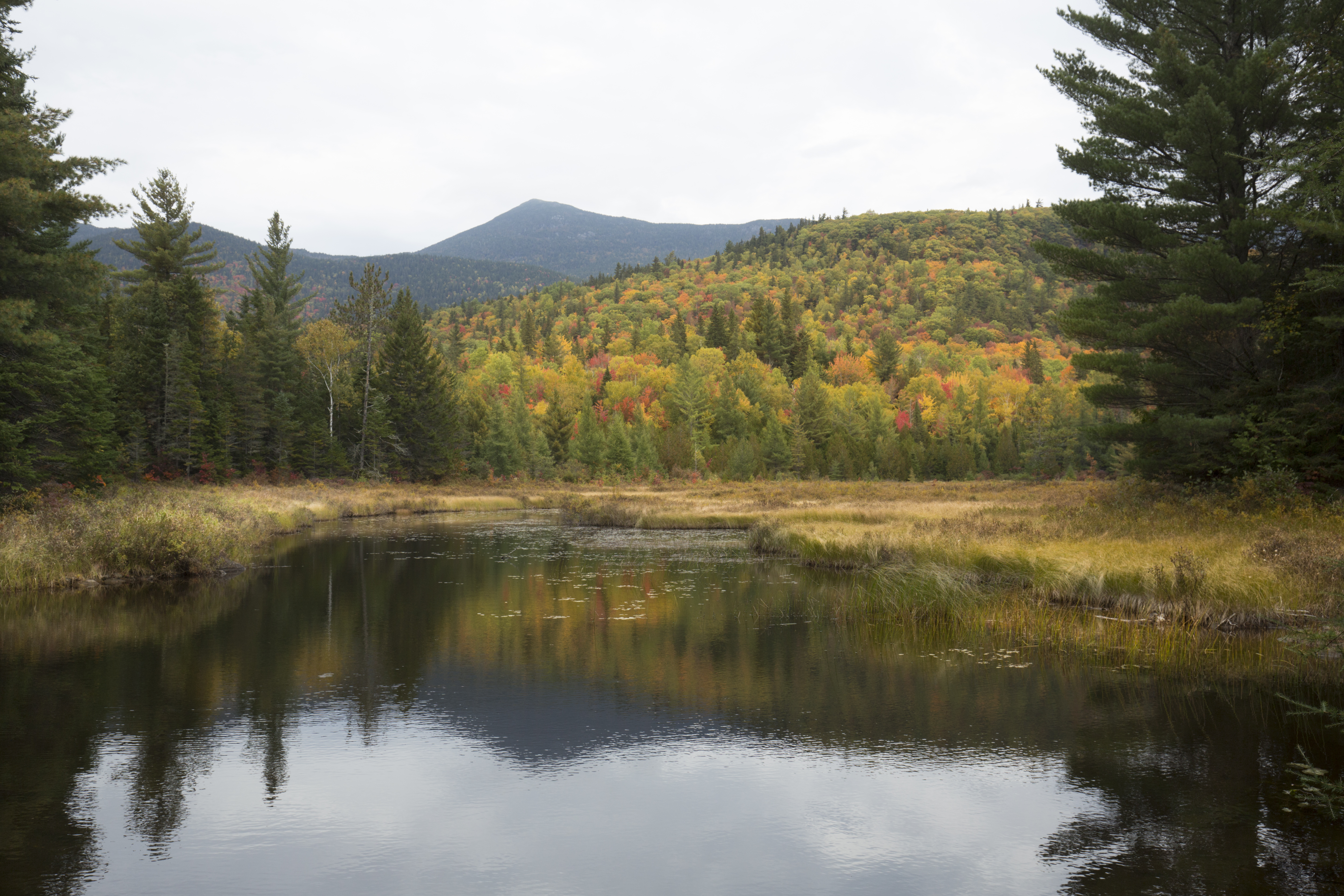 Maine's High Peaks Region is stunning at any time of year, but during the fall it really shines © Holcy / iStock / Getty Images Plus

Just over two hours’ drive from Portland along I-295 is this stunning, family-friendly destination with 10 mountain peaks over 4000ft. Perfect in any season, you’ll also be dazzled by its glacial lakes and clear rivers. If you want a scenic drive, take some time to tour its scenic byways, like High Peaks and Grafton Notch, which will give you a quicker way to view the spectacular surrounding mountains. Water sports include pontoon boat rides, fly fishing, kayaking and swimming – though it’s also well known for its ski resorts, Sugarloaf and Saddleback Mountain.

The town of Stratton is the perfect place to refuel and relax, and you can grab some comforting yet inexpensive options at the Looney Moose Café or head for burgers at the White Wolf Inn and Restaurant. The Mountain View Motel offers cozy rooms with full kitchen, and even allows furry friends to join you on your adventures. Though there is a lack of amenities, like a pool or restaurant, this motel makes up for it by offering gorgeous views and super-low room rates. 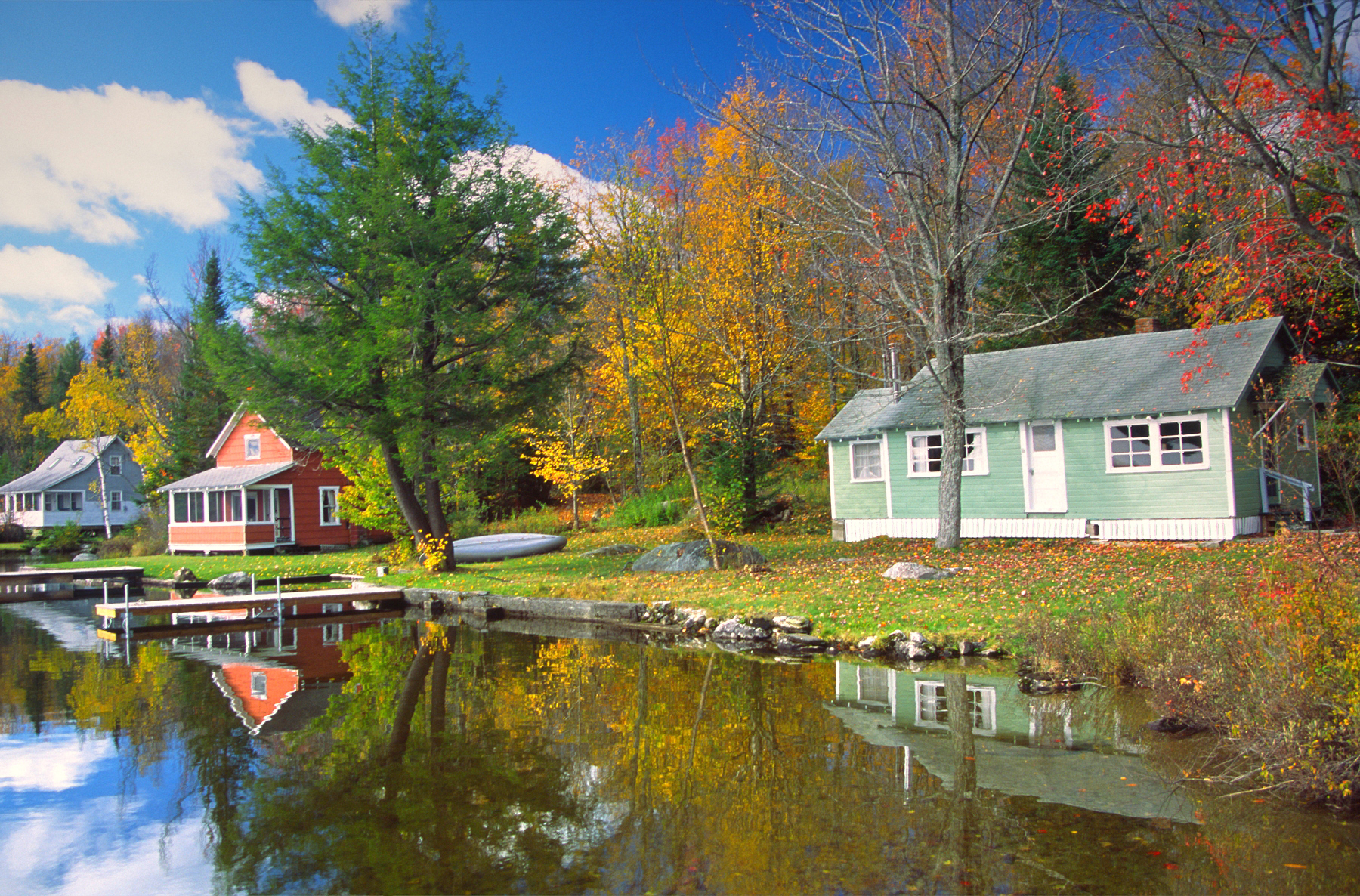 Head westward on State Route 16 to enter this out-of-the-way, northernmost region of Vermont. Shimmied up against the Canadian border and the upper Connecticut River, it’s known for its peaceful splendor. Taking up approximately one-fifth of the land and over a quarter of The Green Mountain State, you can explore its over 200 lakes and ponds while also appreciating the accompanying dense forests and eight state parks.

Bikers, hikers and backpackers flock to this region to hit the Kingdom Heritage Trail system, which includes the Bluff Mountain Community and Gore Mountain Trail, while other adventure seekers might head to gape at Troy’s Big Falls, a monstrous undammed waterfall which includes a sheer cliff face of over 80ft. Burke Mountain offers downhill and cross-country skiing with over 200 inches of annual snowfall as well as views of the geologically profound Willoughby Gap (kids ski free in March).

Country cooking is on the menu at the Peacham Café, housed in a former firehouse while the more seasonal Mike’s Tiki Bar offers cocktails and 30 beers on tap under its thatched roof, with hearty grub from partner Vermont Food Truck as an accompaniment. For budget travelers, the Willoughvale Inn and Cottages offers calm, stunning landscapes and a little history, with its accommodations named after historical figures and places, like The Robert Frost suite or The Songadeewin Lakeview Cottage. 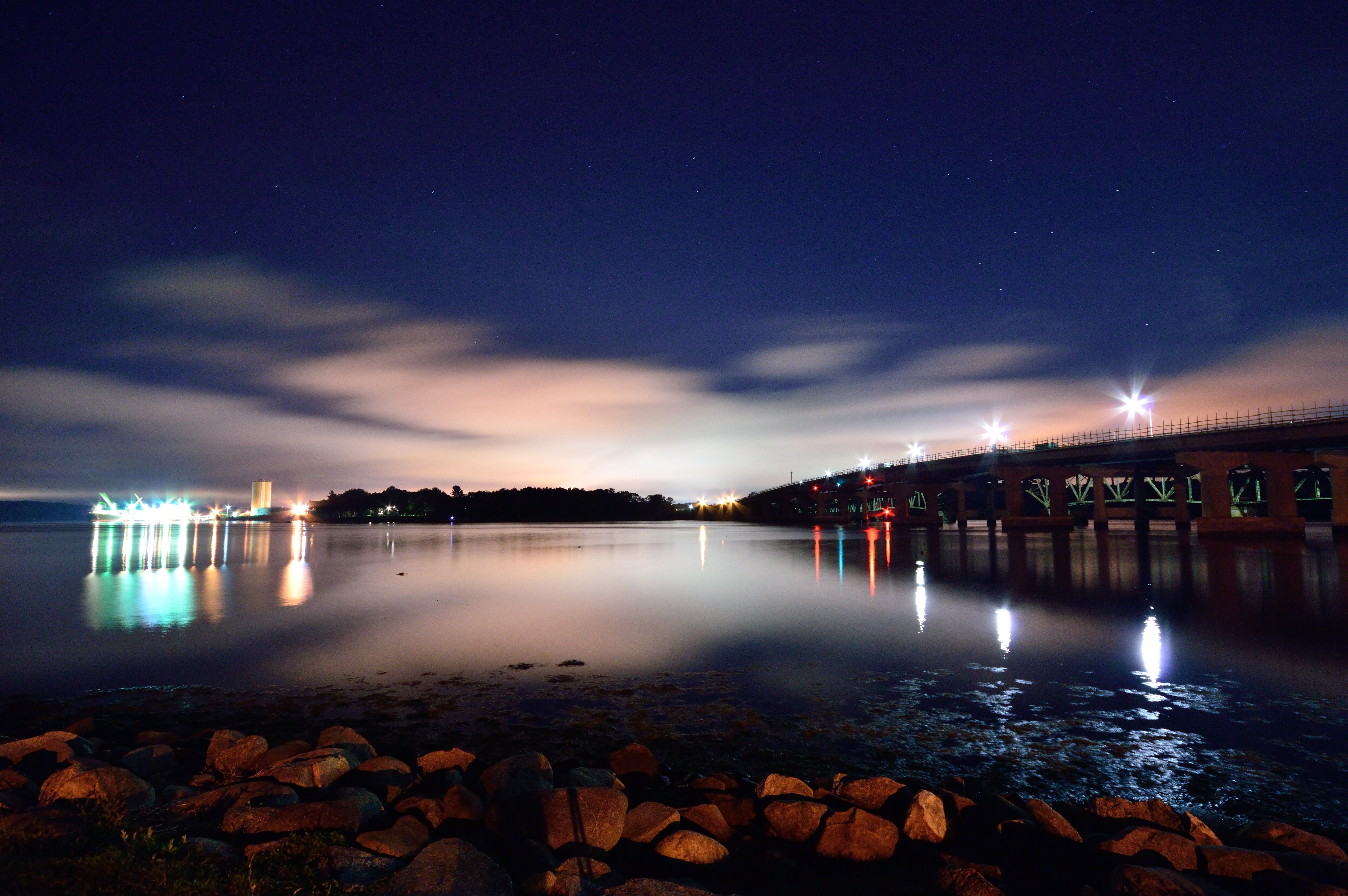 From the Northeast Kingdom, head southbound on I-93, swinging left in Manchester, New Hampshire, to arrive at this state’s miniscule coastline.

Enjoying an intoxicating mix of culture and maritime activities, this region straddles Maine and includes ownership of the Isles of Shoals and Star Islands. The entire Seacoast region covers 18 miles of the Atlantic Ocean, but head to Hampton Beach for family fun as well as a dazzling white-sand beach. Don’t want to go too far to lay your head? Room at Ashworth by the Sea, run under $150 a night, and the property features a heated pool with retractable roof to keep the kids happy as well as three different restaurants for breakfast, lunch, dinner and cocktails.

Portsmouth, near the mouth of the Piscataqua River, is the country’s third oldest city and is an excellent jumping-off point for the living history of the Strawbery Banke Museum, the American Independence Museum and the Children’s Museum of New Hampshire. The dining scene is varied and abundant, and you can enjoy a more upscale, locally sourced meal at the Black Trumpet Bistro or head to Ceres Bakery for an affordable, casual selection of soup, salad, sandwiches and an array of homemade pastries. Stay at the lovingly renovated Hotel Portsmouth, a former 1881 mansion with vintage charm and free continental breakfast. 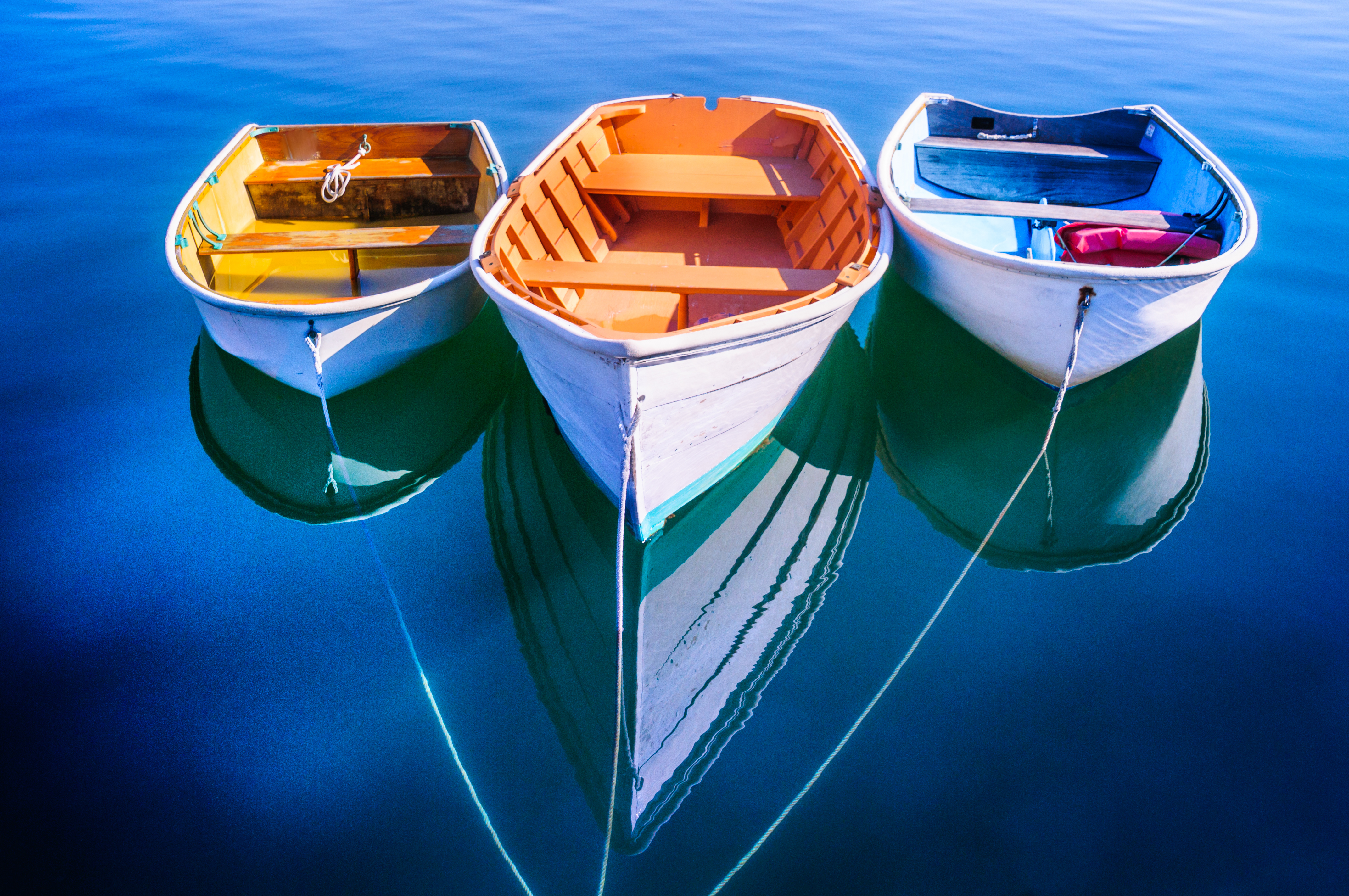 Falmouth is sometimes overlooked on a trip to Cape Cod, but it's worth a stop © Kenneth Wiedemann / E+ / Getty

Take I-495 southbound to loop around Boston (or stop in for a bit if you have the time) and arrive in Cape Cod and the pretty little town of Falmouth, Massachusetts.

This official Preserve America community was also the residence of Katharine Lee Bates, the author of treasured tune, “America the Beautiful.” History aside, this serene corner of southwest Cape Cod is also home to over 70 miles of ocean shores, eight distinct villages and the Shining Sea Bike Path, with nearly 11 miles spanning farms, ponds, cranberry bogs and even salt marshes, spitting you into the village of Woods Hole.

Here, you can not only catch the ferry to Martha’s Vineyard, but also tour the marine science facilities and aquarium at the world-famous Woods Hole Oceanographic Institution. Head to Old Silver Beach for swimming in the calm, blue waters and views of Buzzards Bay and stay for the summer seafood dinners and vibrant sunsets at the beachfront Sea Crest Beach Hotel. Falmouth also offers further budget accommodations at Admiralty Inn & Suites and The Red Horse Inn, both of which have rooms for under $100 per night. 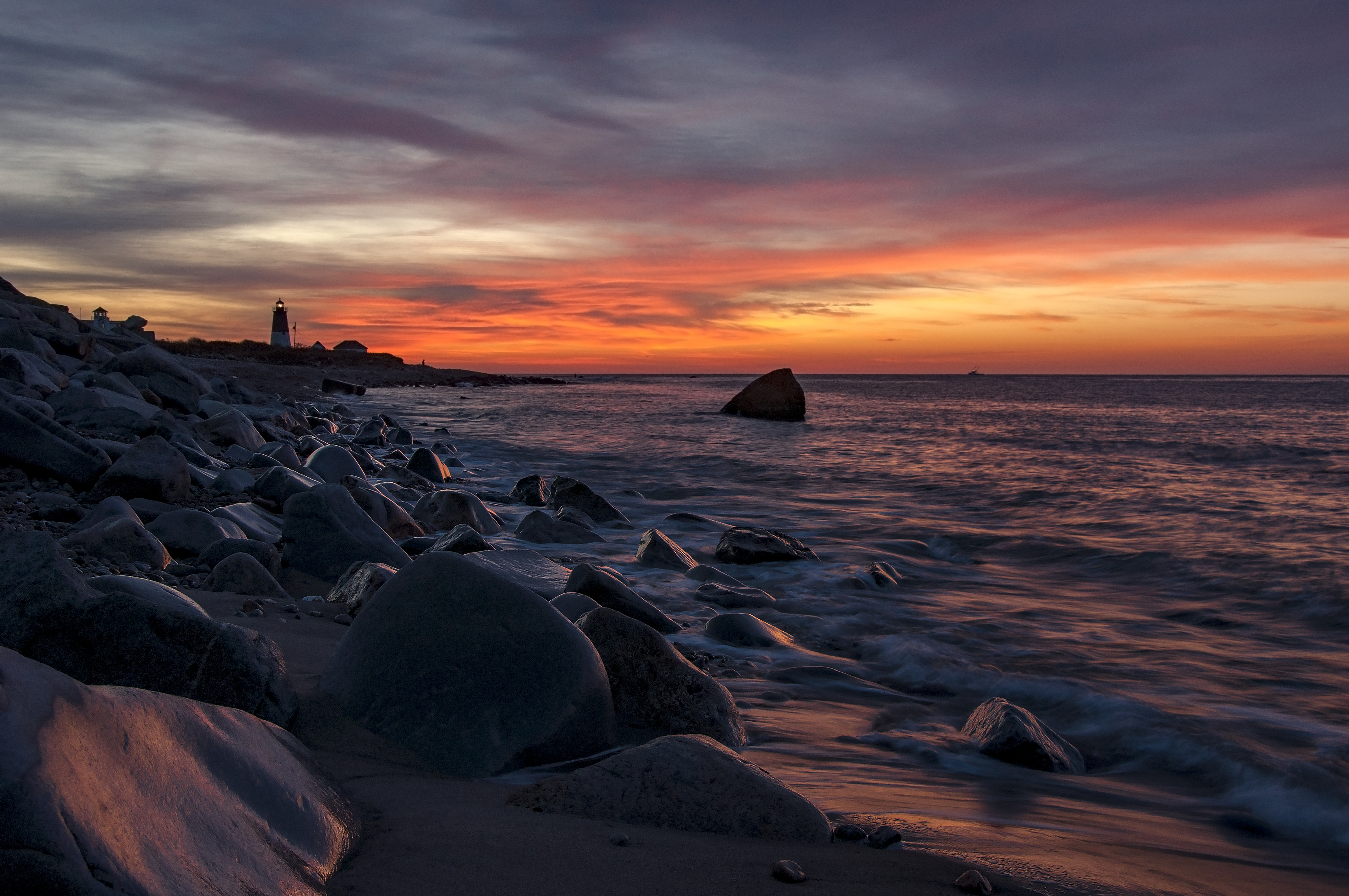 Even if you've had your fill of lighthouses by now, you can never get enough fiery sunsets © Shobeir Ansari © Moment / Getty

Trace the coastline westbound to arrive at this quaint and quirky seaside surf destination in Rhode Island, which offers access to smaller state park beaches like Roger Wheeler and Salty Brine. There you can watch the boats and local fishers, as well as the reliably vigorous waves of Narragansett Town Beach. Take a surf lesson from Warm Winds Surf Shop or just relax on the sand – or hop on the Block Island Ferry to do a little maritime exploring, including the Point Judith Light, a working lighthouse built in 1857.

Because this is New England, historical landmarks abound and you can visit the 23ft Narragansett Indian Monument, carved from a single Douglas fir tree on Kingstown Road.

To fully appreciate your surroundings here, tuck into the local seafood , and Aunt Carrie’s is known for its golden fried clam cakes ($5 for a half dozen) and chowders. The Anchor Motel is a budget-friendly choice, with 15 rooms directly across from Scarborough State Beach. 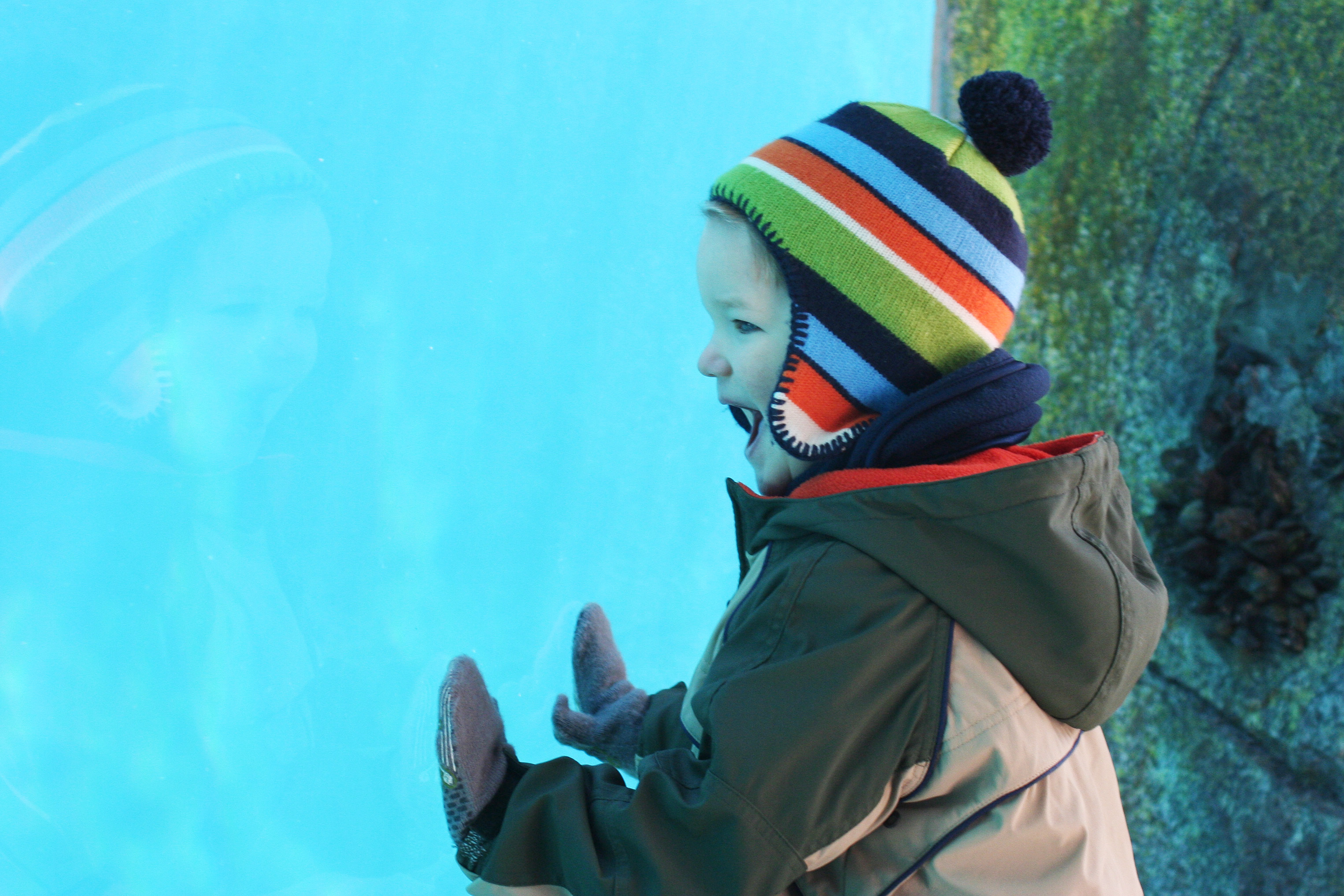 No, cult favorite coming-of-age flick Mystic Pizza wasn’t actually filmed at its namesake restaurant in this sweet, seaside hamlet less than an hour west of Narragansett on US Route 1. But if you pop in for a slice and a selfie, you won’t want to miss the rest of this village situated along the Mystic River.

Bluff Point State Park is home to over 800 acres of lush land for hiking, biking and fishing, and the historic district straddling the river has something for everyone, including the still-working Bascule Bridge built in 1920. The popular Mystic Aquarium was recently certified by the American Humane Conservation and makes a welcome home to sea lions, penguins and even sharks, while the Mystic Seaport Museum concentrates more on history, with a working preservation shipyard and recreated 19th-century village to explore.

Ford’s Lobster is an affordable, BYOB treasure on the water, featuring fresh lobsters as well as lobster roll and lobster bisque. Stay at The Whaler’s Inn in downtown Mystic, comprised of five different buildings, each housing rooms and suites with a nautical theme.