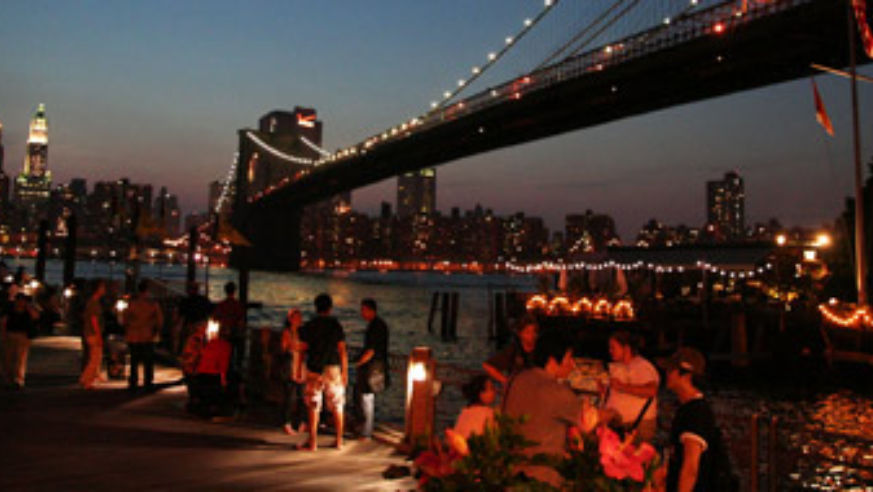 Courtesy TheGirlsNY/Flickr
The spectacular nighttime view of Manhattan from Fulton Ferry Landing, where Bargemusic is moored

Concerts on a floating barge

When it comes to a little night music, a converted coffee barge moored by the Brooklyn Bridge delivers an only-in-New-York experience. Chamber musicians perform for a small audience as the barge sways, not necessarily in time, and the lights of downtown Manhattan and the bridge glow in the background. Bargemusic returns from dry dock on April 16 with a concert devoted to Schubert and Dvorak. Tickets are typically $35 ($30 for seniors, $15 for students), but April 29 brings Jazz Night for $25 ($20 for seniors, $10 for students), and there are free matinees at 1 p.m. on April 24 and May 1.

A new fair on the Lower East Side

Hester Street Fair opens April 24 on the corner of Hester and Essex Streets (about a hundred years ago, the same site was crowded with pushcarts). Already being dubbed the Brooklyn Flea of Manhattan, the fair has enlisted vendors such as Devotte shoes, Virginia-based Malbon Bros. BBQ, and Luke's Lobster. Check the Hester Street Fair Facebook page for news updates. Browsing, at least, is free; Saturdays and Sundays through December, 10 a.m. to 6 p.m., rain or shine.

The PEN World Voices Festival brings together 150 writers from 40 countries for a week of mostly free events, April 26 to May 2. On opening night, Andrea Levy, Mohsin Hamid, Sofi Oksanen, and Salman Rushdie are among the luminaries who'll read from their works in the original languages (with projected translations), $20. Another event with natural appeal is New York Stories, a moderated, more intimate conversation between three novelists and critics, Colm Tóibín, Roxana Robinson, and Darryl Pinckney, April 29, $15.

The Brooklyn Botanic Garden's 42 varieties of cherry trees bloom in different stages throughout the viewing season, April 3 to May 2, and the CherryWatch map is tracking their progress. It looks like some of the weeping cherry trees along the pond are already starting to peak. Saturdays are free from 10 a.m. to noon (instead of $8); it's $15 for Sakura Matsuri, the closing weekend's lineup of taiko drumming, ikebana flower arranging, and tea ceremonies. After a few hours at the garden, you might head next door to the Brooklyn Museum, whose current exhibits include "Art and the Afterlife in Ancient Egypt." It's free the first Saturday of each month, otherwise a combo garden and museum ticket is $16.

Sightseeing in the city can take its toll. After a day out pounding the pavement, rejuvenate at one of the 80 Manhattan spas participating in Spa Week, April 12 to 18, when treatments cost a flat rate of $50. Options include a 90-minute foot reflexology treatment at Le Peau Day Spa, a 60-minute purify and control facial at Fresh, and a 50-minute deep tissue massage at Graceful Services. Ahh.