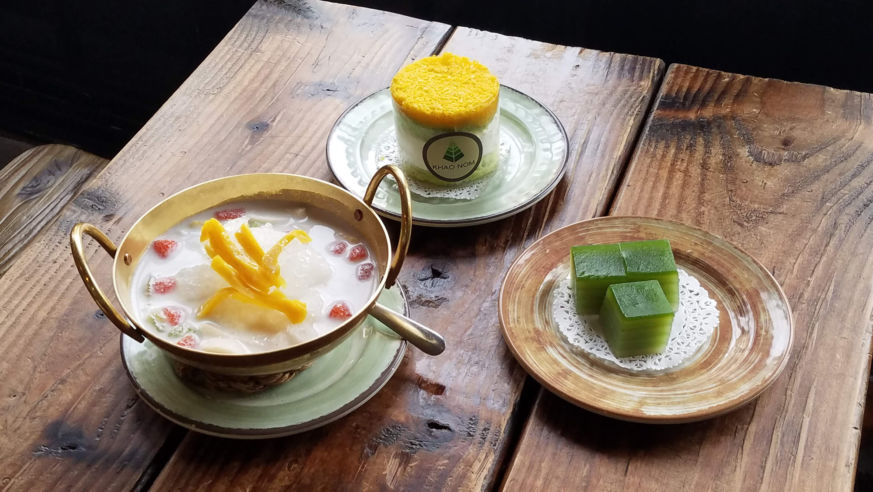 In NYC, when you need to satisfy your sweet tooth, there's more than the Cronut, artisanal gelato, and trendy cupcakes to do the trick. We hit nine bakeries that specialize in an array of treats you might not have tried before—but should.

When it comes to sweets, New York City takes the cake. From passing trends (Cronut, anyone?) to stalwart favorites (we're looking at you, cannolis. And eclairs. And macaroons.) there's no shortage of temptation. But the city's dessert offerings go far beyond those familiar treats, and that’s due in no small part to the many immigrants who come here, recipes and culinary traditions in hand. A tour of the specialty bakeries throughout Manhattan and its boroughs is a portrait of the diversity that makes the city so unique. We rounded up a sampling of international sweets, each from an eatery that's easy to get to with a MetroCard, so there's no excuse for limiting yourself to cheesecake and chocolate-chip cookies on your next visit. 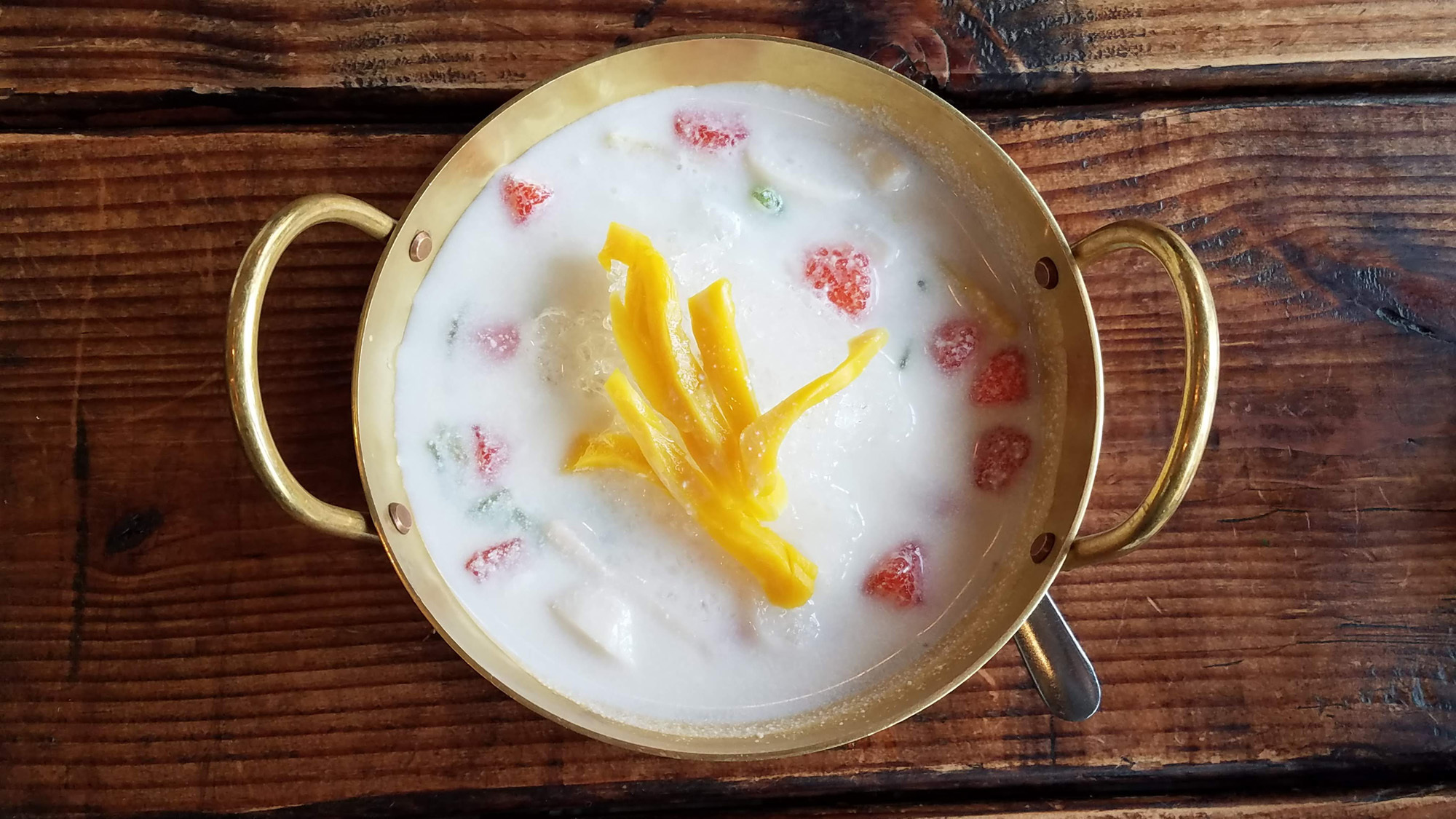 When Saralai Sarapaivanit, who goes by Jackie, moved to the U.S. from Thailand several decades ago, she couldn’t find many eateries making tub tim krob, a cold soup-like delicacy with pandan-jelly bits bobbing in a base of barely sweet coconut milk alongside pieces of crunchy water chestnut. She also couldn’t find many places to buy sweet steamed pumpkin, small tins of coconut custard with corn and tapioca pearls at the bottom, or lustrous luk chup, a marzipan-like sweet made with mung bean and molded to look like mini peaches and cherry tomatoes. So she and her brother-in-law opened Khao Nom, a bakery in Elmhurst, Queens, where they make their own. That’s just a small sampling of the hot and chilled dessert selection served in this high-ceilinged, laid-back space, where the tables are huge slabs of weathered wood set on vintage sewing machine bases. Stay put for the night to sample the bakery's brief menu of rice dishes, or check out the adjacent Khao Kang, the family's full-service Thai restaurant.

In this supremely diverse city, you’ll find El Salvadorian and Colombian men tossing pizzas, Chinese people rolling bagels, and a Nepalese man and former Everest sherpa who’s been slicing paper-thin smoked fish at Russ & Daughters, one of the country’s most celebrated Jewish delis, since 2002. And then there’s the legendary Alvin “Lee Lee” Smalls, an African-American man from South Carolina who runs a rugelach empire from his charming, vintage-chic bakery in Harlem. The traditional Jewish pastry, something like a tiny croissant with a harder, yet just as flaky, spool of dough rolled up with jam, chocolate or, at Lee Lee’s Rugelach By a Brother (leeleesrugelach.com), even more creative ingredients. He sells over 1,000 pieces of rugelach each weekend and he'll certainly tack on about a dozen more the weekend you drop by. 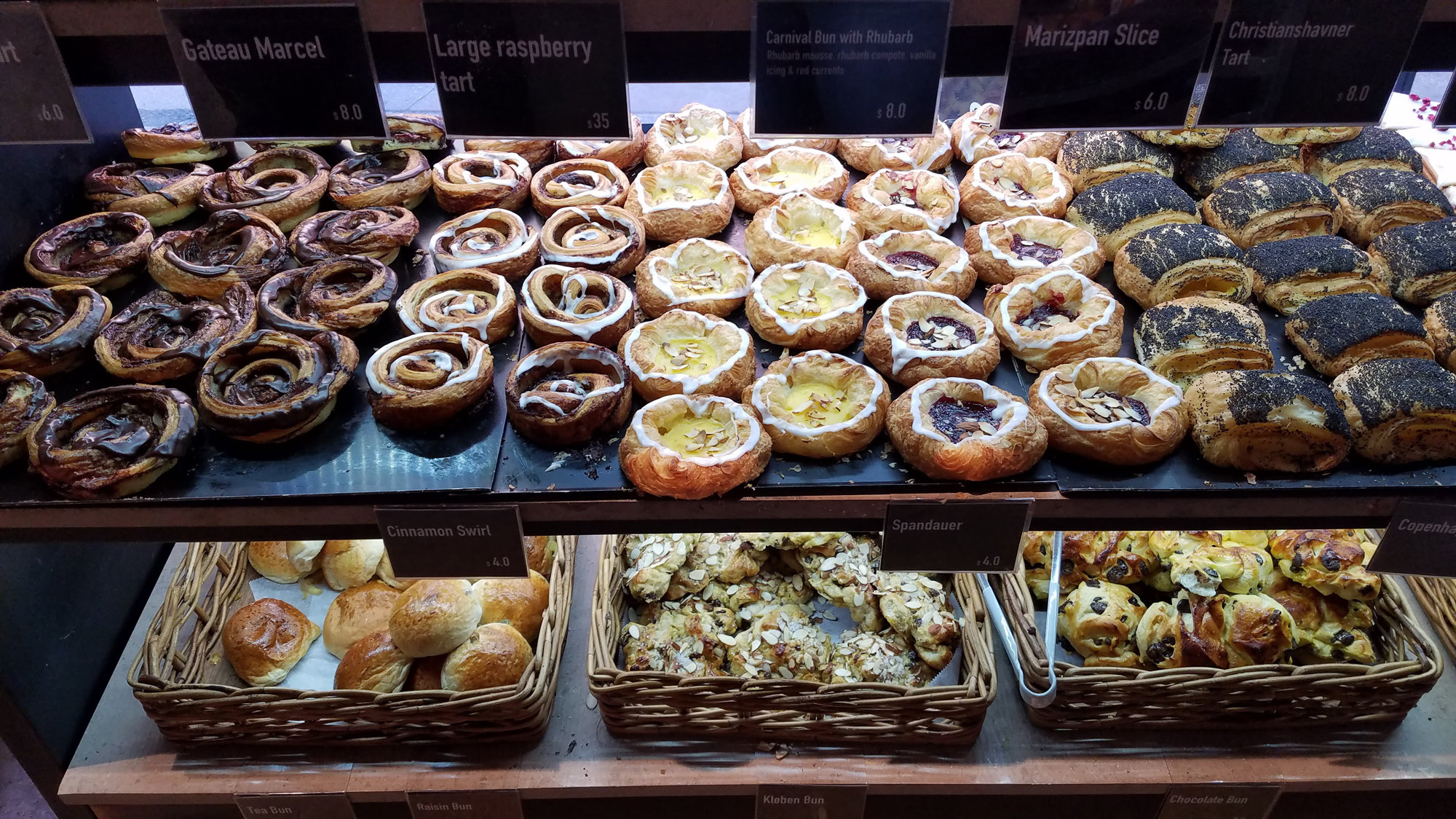 In Denmark, spandauer, kloben, and carnival buns are as common as donuts and chocolate-chip cookies are here. Those traditional treats are just a few of the specialties at Ole & Steen (oleandsteen.us), a bakery with 89 outlets in Denmark and 10 in the U.K. But with the opening of the first U.S. store in Union Square this past January, and two more in the works, New Yorkers can have their fill of those pastries and more. The bakery features shelves upon shelves of Copenhagens (marzipan wrapped in a moist, flaky crust), cinnamon swirls, marzipan slices, and marshmallow puffs, as well as those aforementioned kloben buns (cardamom-and-clove-spiced soft rolls with raisins) and spandauers, which look like what we refer to as a Danish. There’s also a variety of bread for sale, including sourdoughs made with a 150-year-old starter. The place is a spacious café with coffee drinks and smorrebrod (Scandinavian open-face sandwiches) on the menu, so make yourself comfortable and settle in.

Brooklyn Kolache Company (brooklynkolacheco.com), an airy café in the rapidly gentrifying Bedford-Stuyvesant neighborhood, sells all the things other cafés in Bed-Stuy do: espresso, cappuccino, matcha, vegan buns. And it sells something the others don’t: kolaches. A traditional dessert in the Czech Republic and Poland that found its way to fame in Texas, these sweet rolls are made of a lump of yeast-risen dough that envelops sweet or savory fillings. PB&J, chocolate, and jam are among the regularly changing former, while savory picks include cheese, eggs, turkey, and sausage. Owner Autumn Stanford, a Texas expat, has done her homeland proud. 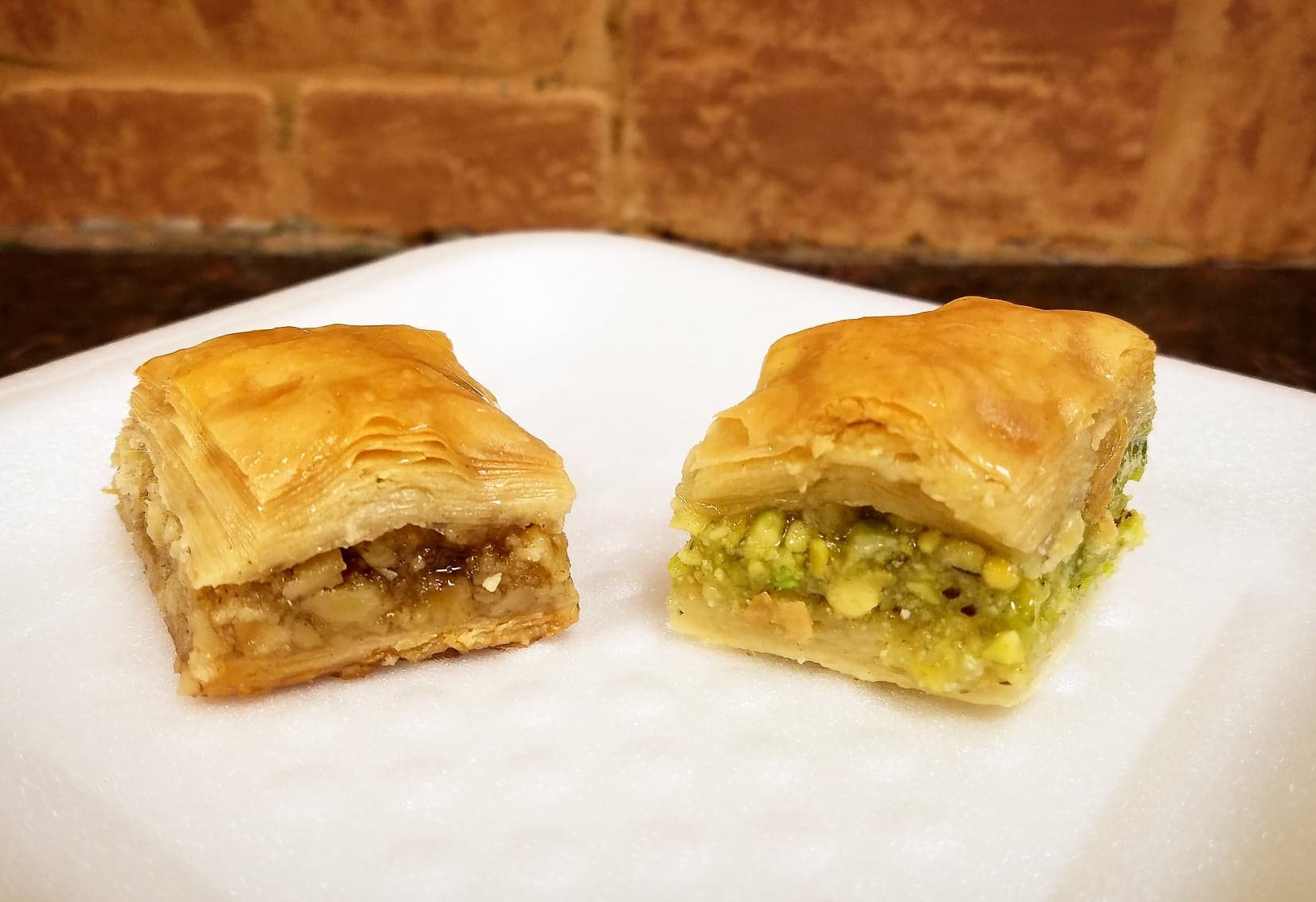 What Nathan’s Famous is to hot dogs and Peter Luger Steak House is to the T-bone, Al Sham Sweets & Pastries is to baklava. That’s to say: a New York standard-bearer. This cash-only Jordanian bakery sits amid Halal markets and Middle Eastern restaurants in a corner of Astoria, a neighborhood that’s grown increasingly trendy in recent years. Throughout the changing times, this compact operation has cranked out the same exquisite baklava every day. Native to both Middle Eastern and Mediterranean countries like Greece, these treats are dense layers of filo dough and nuts soaked in a delicate rosewater-spiked honey syrup, making them at once rich and ethereal. The baklava comes in four flavors—pistachio, almond, cashew, and walnut—as well as different shapes and sizes. They’re all made in-house in massive batches to accommodate the steady stream of customers throughout the day. Al Sham is also a destination for kunafeh, a dessert said to have originated in Palestine. Prepared in a flat pan, with a syrup-soaked thin dough spread with sweet cheese, it's like pizza's sweeter cousin, and a delicacy unlike any other in NYC. 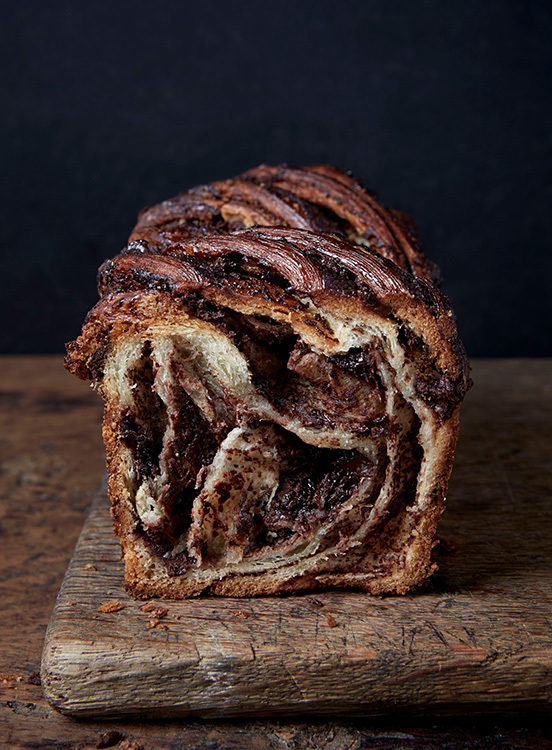 When you walk into Breads Bakery in Union Square or Lincoln Center (breadsbakery.com), the smell of butter is so think, you can almost taste it in the air. That's because of the loaves of fresh babka that frequently emerge from the oven throughout the day. Babka, a traditional Eastern European hybrid of cake and half yeasted bread, is not new to New York, what with immigrants coming from those countries for generations. What is new is its ubiquity, and we have Breads largely to thank for that. (Or to blame, if you’re watching your calorie intake.) These rich loaves, woven through with ribbons of Nutella and chocolate chips, are habit-forming, to say the least. Not surprising, then, that you save $2.50 per loaf when you buy two. (PS: There's a year-round Breads kiosk in Bryant Park near the New York Public Library. A little too convenient, if you ask us.)

Here in the U.S., most of us know green tea as the staple hot drink in Japanese restaurants, but in Japan, it’s a common flavor of all kinds of desserts. Little surprise, then, that the green tea mousse cake is a popular pick at Harbs (harbsnyc.com), a 37-year-old Tokyo-based chain that opened its first restaurant outside of Japan in Manhattan’s Chelsea neighborhood in 2014, followed by outposts in Soho and on the Upper East Side. There are French accents all over the place at these posh, handsome eateries: Tiled walls and wood accents give them a Parisian bistro vibe, and classic French baking techniques inform many of the cakes. But it’s the native ingredients, most imported from Japan, that make the desserts so intriguing. That aforementioned green tea cake incorporates earthy matcha in the sponge cake and specks of red bean in its green-tea mousse. Freshly whipped cream makes an appearance here and in several other desserts, including Harbs’s version of a French tart, where the cream is flecked with red bean. 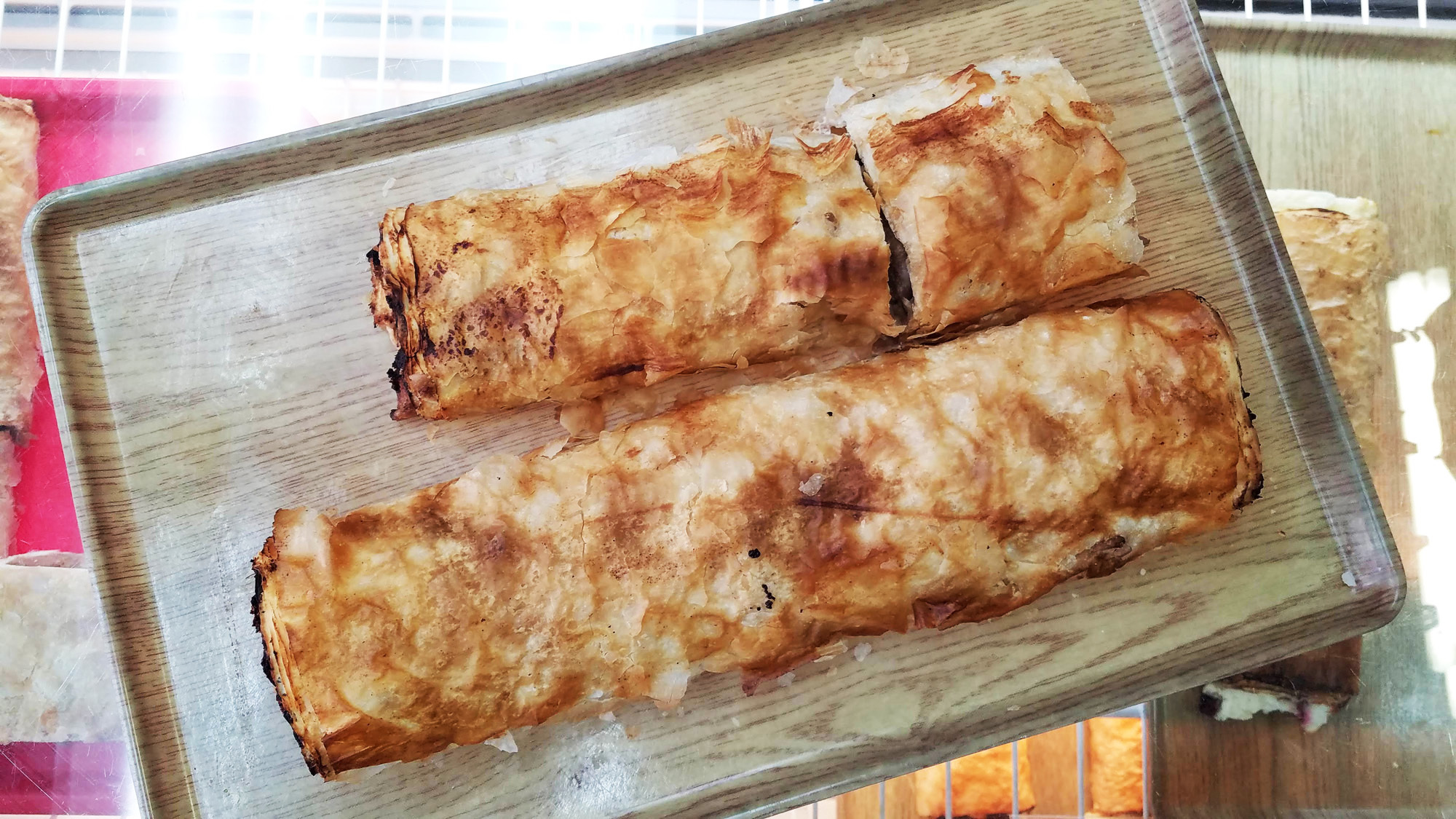 Never mind apple strudel. At Andre's Bakery (andresbakery.com), poppy seed, cherry, sweet cheese, and even savory options like cabbage, spinach, and feta run a tight race when it comes to most popular. The buttery, flaky strudels are made in-house daily with owner Andres's mother’s original recipe. In 1976, the Hungarian expat opened the first shop in in Forest Hills, a quiet, family-centric neighborhood in Queens, about five miles south of LaGuardia Airport. Since then, her son has carried out her legacy and opened two more shops, both on Manhattan’s Upper East Side. (The 2nd Avenue location is also a restaurant-café that serves hearty, traditional dishes and Hungarian wines.) Other Hungarian desserts on offer include palacsinta, a crepe-like indulgence, and dobos torte, a fluffy, caramel-topped sponge cake layered with chocolate butter cream. All the desserts are made fresh daily in the original store.

Dulce de leche, a caramel custard, is easy to find around New York City, especially in bakeries and restaurants in the many Spanish neighborhoods throughout Brooklyn, Queens, and the Bronx. A little less common is a flaky pastry filled with the stuff eclair-style. That’s just one of the highlights at La Gran Uruguaya (la-gran-uruguaya.com), a no-frills bakery-cafe in Jackson Heights, arguably the most diverse neighborhood in Queens, and possibly the whole city. Spongy tres leches cakes, banana tarts, flan, mousse, and tortitas negra, an Argentinian specialty, fill the expansive cases. This eatery also serves savory dishes, but when it comes to Latin American desserts, it’s tough to find a selection as varied as the one here.