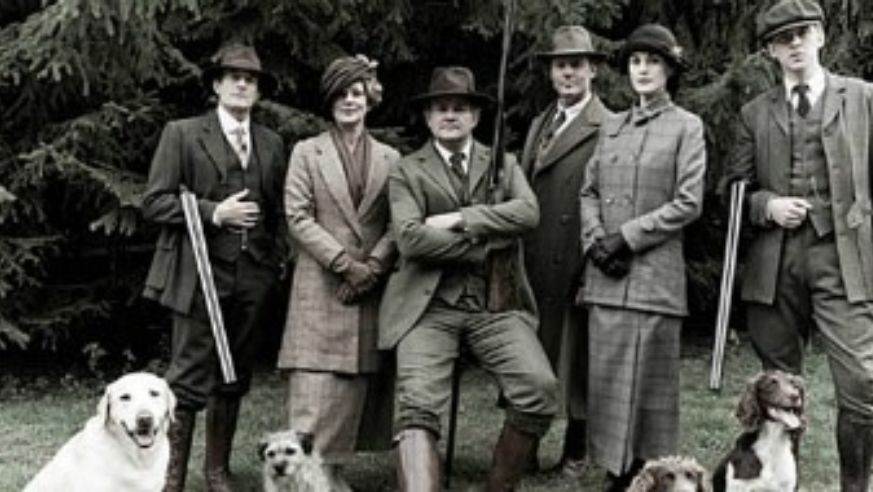 As fans know, the World War I-era TV series follows the trials of the Crawleys, a family that spins into gloom when the noble Earl and patriarch Robert Crawley loses his male heirs. The film was shot on location at a castle where lords and ladies once threw real-life parties with champagne and pearls.

The show may inspire you to travel to England to see the history behind the fiction. As a Londoner, I have already seen the second season of this Emmy-award-winning show (which screened this fall) and can assure you that the TV series has even more heart-stopping dramatic moments this year than it did in its first season. It remains "reality-free" in an enjoyable way. I also had the good fortune to visit the filming location last year, and I recommend it as a fun outing on your next vacation to England.

In Hampshire, this grand 1840s castle plays the role of Downton Abbey. The Edwardian mansion, built in 1842, is within striking distance of London, and is open to visitors. It still inhabited by a real-life Lord and Countess of Carnarvon.

As visitors walk around the lavishly furnished three floors of the house, they can see framed family photographs featuring Queen Elizabeth, Princess Margaret, Prince Charles, and other friends of the family. Traipse through its 1,000 manicured Berkshire acres, under cedars and by chocolate-box cottages. Pretend that you are Dowager Countess of Grantham, played on the show by Dame Maggie Smith, and say things like "Do tell!" and "What is a 'weekend'?"

In the second season of Downton, the estate opened itself to nurses and beds to tend to wounded soldiers, and that was true in the real Highclere Castle as well, with the lady of the house hiring nurses, “dressed in stylish strawberry-pink uniforms,” to attend to the war wounded, as reported by The New York Times.

Surprisingly today, the cellars of the mansion feature an exhibit on ancient Egypt. It turns out that a previous Lord who lived in the mansion was a sponsor of the archaeological investigations that ended in the discovery of King Tutankhamen's tomb in 1922. The castle has a tribute to that history, with ancient antiquities on display.

The estate is about 70 miles west of London. From London's Paddington Station, hop National Rail and ride an hour to Newbury (from £20, or about $32). Once there, take a cab or bus about 6 miles south to the castle.

The mansion is only open on selected days this year: April 2âˆ’15, again for a few days in May and June, then, from July 1, it is open on Sundays through Thursdays until September 13. (adult admission, from £16 (up from £9 last year!), or $25, full schedule (opens as a PDF), highclerecastle.co.uk

The Carnarvon Arms, in nearby Newbury, is an old coaching inn that used to offer food and drink to visitors and staff to the castle that's been renovated in the past decade. Rooms from £60, bespokehotels.com. The nearby village of Hungerford has countless antique shops where you can put your hands on many furnishings similar to what you might see at the castle, from silver lion salt shakers to wooden butter churns.