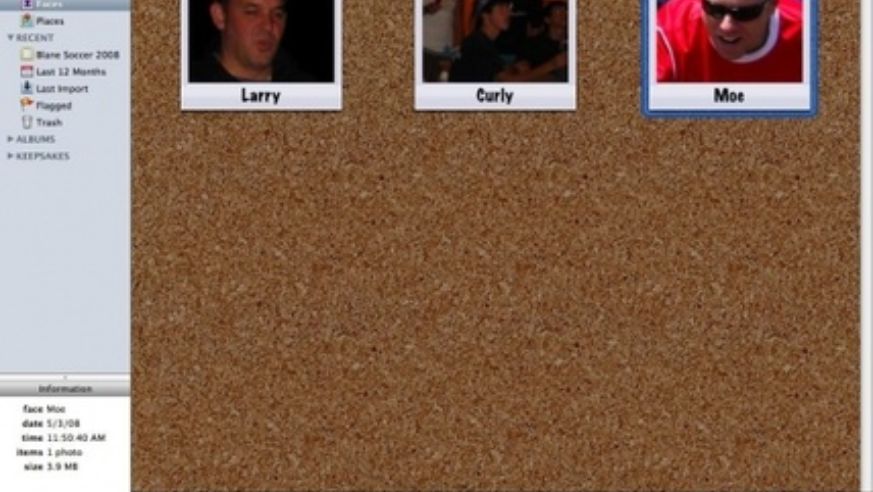 The latest iPhoto software from Apple, iLife '09, allows you to organize your digital photos by faces and places.

After you load up your photos, use a "Faces corkboard" (shown at the right) to automatically categorize your friends and family members. Then tag a photo of a person by typing in their name. Apple's face-recognition software will scan the rest of your pictures to find faces that match the mugs of the person you identified, tagging those other photos with the person's name, too. While the technology isn't new—Google, for instance, introduced it to its Web-based photo organizing service Picasa service last September—it is convenient if you already have photos stored on Apple computers.

The technology isn't perfect. During my recent one-on-one tutorial at an Apple showroom, I saw the computer failed to correctly identify photos of two nearly-identical siblings. (Less extreme examples also pose problems for the software, such as when a person isn't facing the camera in a photo.) But I learned how mistakes can be manually corrected pretty quickly. I also found that you can speed up your photo tagging by highlighting entire rows of photos at a time and approving all of the tags at once.

The most impressive feature, at least to me, is a handy one-click button that not only automatically logs you into Facebook or Flickr but also directly uploads your images to those sites—and preserves all of the tagged information so you don't have to waste time duplicating your efforts. If a Facebook friend tags one of your photos, the new name is synced to iPhoto. Genius! To post a picture to myBudgetTravel or other photo-sharing site (like Shutterfly), drag it to your desktop and upload it from there.

The new iPhoto software also organizes your snapshots by places, letting you type in geographical keywords, such as Hawaii, to help simplify your searches. If you have an iPhone or a newer digital camera like the Nikon Coolpix P6000 that automatically records GPS data for you, the program can also map your photos based on location. The "geotags," or the latitudinal and longitudinal coordinates of where the photo was taken, are saved on a Google world map. Just clicking on the map can bring up all the photos that were taken in that spot.

The 2009 edition of iLife (which includes the updated iPhoto software) is in stores and comes with every new Mac computer. Upgrade packs cost $79.