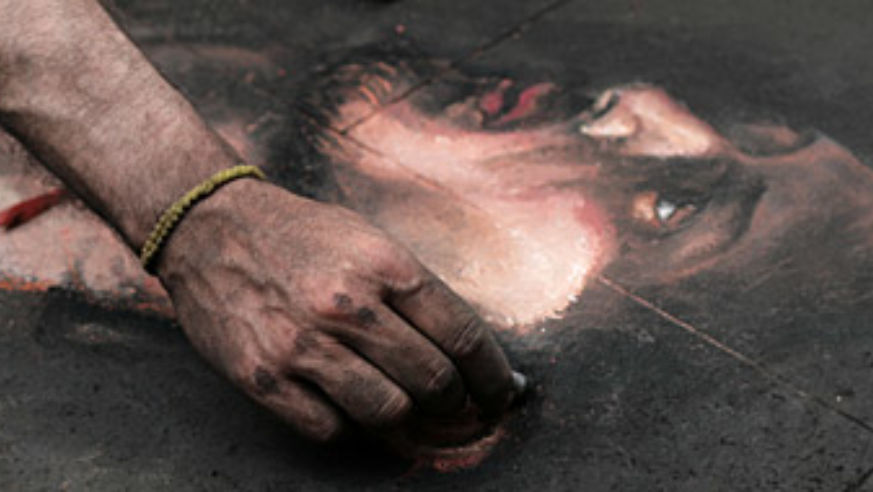 Jessica Stewart
Click the image to launch the slide show.

Creative expression in Rome isn't limited to museums and churches. It's out in the open, if you know what to look for and where. We sent photoblogger Jessica Stewart out to capture street art's various incarnations—stencils, graffiti, chalk drawings, even break-dancing. Check out the results in our slide show.

Stewart moved to Rome four years ago, after completing degrees in art history and Renaissance studies, and began posting at RomePhotoBlog. Her photographs are on display through July 31 at Al Vino Al Vino (via dei Serpenti 19) and will be included in a show at Hobo Art Club (via Ascoli Piceno 3), September 11-25.

I chatted with Stewart over pizza at Il Maratoneta in Rome's San Lorenzo neighborhood this spring and, more recently, traded emails to get her impressions of the evolving street art scene.

What sparked your interest in street art, and when did you start photographing it?

I'd always noticed stencils and posters around in the city, but my real interest started in February when shooting a series on San Lorenzo for my blog. It's an area where a lot of street artists work and afterward I noticed it became a strong theme for that shoot. From then I've been doing more and have gotten a chance to get to know many of the artists, which makes it all the more interesting.

Where can tourists go to spot street art while in Rome, and what should they be looking for?

All the artists I know are quite respectful of the city, so you won't be finding anything pasted up on the Colosseum—you need to go a bit off the beaten path. The neighborhoods of Trastevere, Pigneto, and San Lorenzo are all good bets for finding street art. Ostiense has some nice stuff as well, especially near the Garbatella metro station where there are many interesting painted murals, and the Jewish Ghetto has work by Sten and Lex, as well as stencils by the French artists C215.

For tiny touches, check out the backs of street signs and bus stops, where many artists will place small stickers. Just keep your eyes peeled, as once you start looking you'll find examples everywhere. Now my friends (many of whom have lived here for years or are Romans) are seeing street art everywhere for the first time. It's been under their nose the whole time, but they hadn't noticed until someone pointed it out.

How does street art in Rome compare with that of hubs like London, Berlin, or L.A.? What makes it uniquely Roman?

I think that Rome street art is still very unknown, even in the city itself, and hasn't gotten nearly as commercial as in a lot of cities. A very small number of artists are making a name for themselves internationally already, but most are still emerging, which is really exciting. And I think the city is just starting to come around, with more events being organized and the founding of the gallery MondoPop, which features a lot of street artists, right near the Spanish Steps has brought even more legitimacy to the scene. As far as what makes it very Roman, I think you'll see a lot of pieces influenced by classic art, religion, and politics.

Rome has centuries worth of masterpieces. How do you think that legacy rubs off on street artists?

The influence is more obvious with some than others. The artist Lucamaleonte studied restoration here in Rome, and his pieces always remind me of the engravings or etchings of Albrecht Durer or Rembrandt. Mr. Klevra and Omino71's Byzantine-style Madonna and Child icons are other example of pieces that are influenced by the surroundings. But at the same time, I don't want to say that this is what every artist is looking at. Many, I think, subtly pay homage to Roman history, such as the Hogre stencil that with a date written on a beer bottle gives a nod to Allied bombings here in Rome in the 1940s. More often than not, however, I think people are creating their own styles. Artists have always commented on politics, religion, etc., so I think that isn't anything new. What I do think is that all the artists respect the city and are striving to express themselves outside of the established norms.

How long has the Rome scene been around, is it changing, and what sort of community is there?

As I understand it, around 2002, a small group began working more on stencils and posters. From there, the movement has grown, and I'm always struck by the diversity and talent I see here. There's a strong community of artists that has grown up around certain events and locations. The centro sociale Strike near Stazione Tiburtina is one haven, and certainly MondoPop's exhibits have brought people together, as well as the Stick My World exhibitions (begun by artist Omino71) that have given Roman artists more chances to work together. Some, like Sten, Lex, and Lucamaleonte work in a collective studio, while others often will go out together and paste up posters or work together on pieces.

Do you have a favorite artist?

I don't really have one absolute favorite, so if you don't mind, I'll give you a list of some favorites (in no particular order!). UNO, Hogre, 999, #, Lucamaleonte, Sten and Lex, Mr. Klevra, Omino71, Alice', Sone, Urka, and [X]. All completely different, but all very interesting and talented in their own ways. Most don't have websites, but almost everyone has an account on Flickr, which you should be able to find easily.