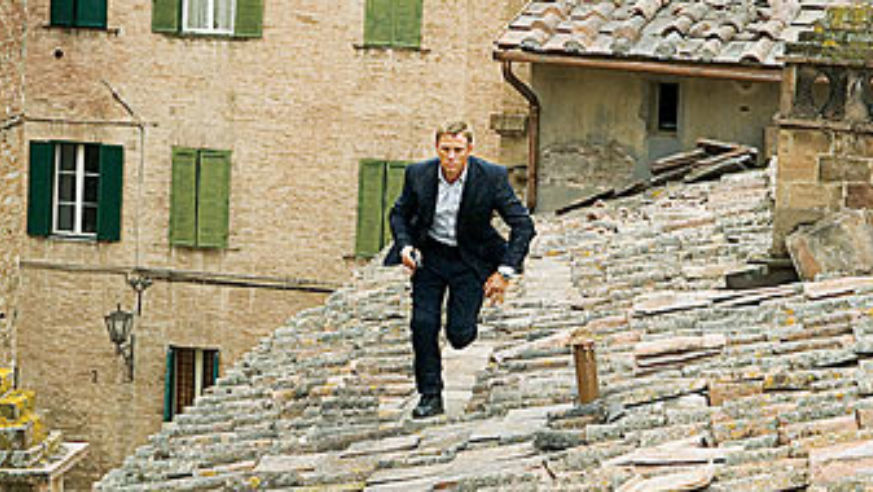 You can keep your Bourne Identity, your Mission Impossible. This week on BudgetTravel.com, we celebrate the best secret agent. Bond is back with "Quantum of Solace". The title may be odd, but the plot is familiar. The film picks up where it left off in the hugely successful "Casino Royale". Bond seeks revenge after his lover is killed. But the movie has twice as much action as its predecessor. It opens tomorrow, Friday Nov. 14.

Q: The opening sequence starts with James Bond (Daniel Craig) in a gray Aston Martin speeding through a tunnel under a hail of bullets. It ends with Bond chasing an assassin through the streets of Siena. I understand that this scene took eight weeks to shoot in three locations in Italy. What were some of the highlights?

A: The foot chase starts underground, goes through the cisterns and pops up in the center square of Siena where the Palio race is happening. The interesting thing is the cisterns. When I was shown the underground city, I thought it was fascinating that we were walking under the city. We shot the real horse race in August 2007 when there are actually 50,000 people there. Then we came back in May 2008, re-enacted it and had 1,000 people that surrounded Bond [for the close-ups]. From the square Bond runs across the roofs, up the bell tower and then crashes into an art gallery. We shot them chasing each other on the rooftop in Siena but once they jump in the bell tower, that scene was built on a stage made of the same material.

Q: There's a terrific scene at the Bregenz Festival House that required more than 1,000 extras in black tie. Was that one of the more difficult scenes to coordinate?

A: The scene is basically Bond spying on the Quantum organization as the opera "Tosca" is going on. There's a great blue eye on the floating stage that's built on the lake. You see what's happening with "Tosca" on stage intercut with what's happening behind the scenes backstage. It's easier to work with so many extras. I find it's much harder to do intimate scenes.

Q: One of the most exciting scenes is a skydiving scene. How was that filmed?

A: There's a cat and mouse game. Bond and Camille are in the plane and they are getting shot down. The organization Quantum wants them dead. They need to get out of the plane, but they only have one parachute between them. Directors always shoot actors against a green screen but I feel like it doesn't feel real. In the air tunnel at Bodyflight (see more details below), where skydivers train, you have the same effect and feel because it's the same air pressure. The actors aren't on cables and are floating. Their face configurations are really real so they can just focus on acting. We had 16 cameras around the cylinder, and we motion-captured the entire flight. We were then able to rebuild the environment so it would very real. And we had a cameraman in there on some takes for close-ups.

Q: Was it difficult getting Daniel Craig and Olga Kurylenko (Bond's co-conspirator) to do their own stunts for this scene?

A: They wanted to do it. It wouldn't have been possible for stunt people to do it because you can see their faces. They had no other choice! Olga trained for three weeks prior; Daniel didn't train that much—only a few times. It was the first time skydiving for both.

Q: Did you get into the wind tunnel as well?

A: I wanted to, but didn't get to it. [See below on how you can try out the wind tunnel yourself.]

Q: What are some of your most travel-inspiring movies?

A: "The Parallax View" because it has the beautiful Space Needle in Seattle. I always wanted to travel to Seattle because of that movie. And in "The Talented Mr. Ripley", Anthony Minghella has some beautiful locations in Italy.

Q: Of your own movies, is there one that made you want to travel the most?

A: "The Kite Runner," filmed in Kashgar in western China, is very special. It's a town on the old Silk Road about 30 miles from the Pakistani border. The landscape is the most breathtaking.

For a video outtake of Bond's plane being shot down, plus tips on how to travel to the scenes from the opening sequence in "Quantum of Solace," check out this video:

Want to plan a trip to see the sights Bond visits in "Quantum of Solace"? Here are a few stops you can make:

In the fast-paced opening scene, Bond chases a spy through a warren of medieval aqueducts in Siena. In the summer, you can take a tour of the subterranean cisterns through La Diana Association ($13, 011-39/366-358-8181).

Bond eventually pops up through a manhole in Piazza del Campo—directly in the path of the Palio horse race. If you want to catch next year's horse race—which is free—you need to make plans now. It happens in July and August.

In one key scene, Bond’s plane is shot down. He has to share his parachute with his latest paramour, Camille (played by Olga Kurylenko). The scene was actually filmed in Bedford, England, at Bodyflight, a skydiving center with a wind tunnel that simulates free-falling at 120 miles per hour. There aren't cables in the wind tunnel. You’re literally floating! (Bodyflight.co.uk, from $70)

Bond tracks down a villain at the Bregenz Festival House, a 7,000 seat concert hall with a floating stage on the banks of Lake Constance. You can attend an opera there. Tickets for next summer start at $40.

Looking for Bond action that's closer to home? Head to Miami tomorrow. You can indulge in some Sean Connery nostalgia there. The movie Goldfinger (1964) was filmed at the Fontainebleau Miami Beach Hotel. The 22-acre property re-opens tomorrow, November 14, with a spectacular 40,000-square-foot spa. Designed by architectural visionary Morris Lapidus and opened in 1954, the Fontainebleau takes center frame of the famous aerial shot that opens Goldfinger. Later, the dourly amused Bond (Sean Connery) catches the greedy Auric Goldfinger (Gert Fröbe) cheating at cards by the hotel's pool.

The place: Sadly for fans, the hotel scenes were a ruse. To save money, the actors performed on a replica of the hotel's pool deck at Pinewood Studios in England. Fictional CIA agent Felix Leiter (Cec Linder) did, however, drop by the actual hotel in northern Miami Beach for some exterior and establishing shots. The Fontainebleau has recently undergone a half-billion dollar facelift. 800/548-8886, fontainebleau.com, from $245.

MORE ON BOND FROM BUDGET TRAVEL

Where to drink Bond's signature martini, the Vesper

Save 10 percent on Bond vacations picked by Nov. 16