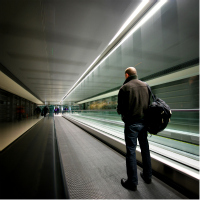 Houston is the costliest large airport to fly out of nationwide. Bush Intercontinental tickets cost about $85 above what they should, says a survey.

Newark and Dallas are the next worst offenders when it comes to high fares.

Here's how the study worked. Silver studied prices for domestic round-trip tickets in coach class. He made an estimate of what a "fair" ticket price should be at each airport. His formula is complicated, but it's based on a simple question: What if no single airline had a near-monopoly at any airport.

For example, Delta controls about two-thirds of the traffic at Memphis's main airport. Silver says fares would be about $100 cheaper in Memphis if more airlines competed for business there. (We'll soon find out. Last month, Delta said it would soon cut one out of four of its flights departing from Memphis.)

On this score, the most expensive airport in America is Fayetteville, Ark. Its coach-class round trip tickets cost $527 on average. That's $158 above the estimate of "fair" prices. The reason is simple, says Silver: There aren't enough airlines competing to serve local customers there.

Here are the largest airports with bargain prices:

These are the five mid-sized airports with the lowest average fares:

These numbers aren't perfect, as critics Gary Leff and Seth "the Wandering Aramean" have pointed out. What's considered "fair" by one person may not by another. Yet there are clearly many airports in the country—especially ones not served by many airlines—where locals pay very high prices to fly.

The key lesson: Poor Texas! It's stuck with Houston and Dallas as costly gateways.

Should we tip flight attendants? 60 comments

Introducing the new 'all you can drink' cruise 100+ Facebook likes 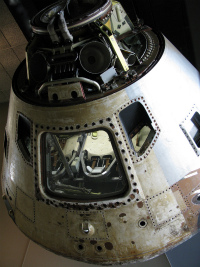 A voluntourist speaks out: a first-hand account of helping in the wake of disaster

It's national volunteer week! In commemoration we opened up our blog to Q&A; with voluntourist and travel writer, Terry Ward, who shares the inspiration for her journey to Haiti in the wake of the 2010 earthquake, plus advice on how others can follow in her footsteps. Q: Is voluntourism more like volunteering or tourism? As a constantly wired travel writer, I hear the terms 'voluntourism' and 'volunteer vacation' everywhere these days. But after two weeks volunteering in Haiti in January with a Boston-based NGO called All Hands Volunteers, I can say that my volunteer experience was more about sweat and hard work than a vacation or traditional tourism. Q: Was there time for fun? Did I drink beers at night in Haitian street bars with some amazing people? Yes. Did I lounge on a beach on my Sundays off and eat lobster plucked straight from the blue Caribbean Sea? Yes. I also slung buckets of concrete for seven hours a day, lived in a tent and bathed with a bucket of cold water behind a blue plastic tarp for a curtain. Those days in Haiti were some of the hardest-working&mdash;and most fulfilling&mdash;of my life. And just what I signed on for. I only wished I could stick around longer to do more. Q: What inspired you to volunteer? Disasters, like the one still unfolding in Japan, have a tendency to linger in the conscience a long time&mdash;even for those of us not personally unaffected, and even when they happen far from home. The fact that Haiti was just a two-hour flight from where I live in Florida made the 2010 Earthquake there all the more shocking. In the months that followed, I knew I wanted to help in a way other than signing a check. I found All Hands through a Google search. Their ethos--along the lines of 'find your own way here and work your butt off and we'll cover your living expenses'&mdash;appealed to me. I bought a plane ticket to Port-au-Prince, met my taxi at the airport and made the 1.5-hour trek to the group's base in L&eacute;og&acirc;ne&mdash;the epicenter of the Earthquake and a place where, like much of Haiti, rubble still towers in the streets. Q: What are the costs for volunteering? You pay your way there, and then food and lodging are covered. Q: Where did you stay? For two weeks, I lived in a tent that I'd brought along and pitched on the roof of the All Hands base (some volunteers chose to sleep on air mattresses in bunks on the base's open-air ground floor, instead). Q: What were your work hours like? Our work hours were from 7:30AM until 11:30AM, when we'd return to the base for a simple lunch of rice, beans and salad or spaghetti, then 1:30PM to 4:30PM. Heavy into school building (so many were destroyed during the quake), All Hands views education as a way to empower the community. And during my stay in L&eacute;og&acirc;ne, my volunteer duties included helping pour a foundation for a new school as well as reading to kids in an orphanage and nailing pickets to a fence that the organization was asked to build as a memorial around a mass grave site where 2,000 bodies were buried after the quake. Q: Would you do it again? The experience has been hard to put into words to my friends and family. Using Facebook to stay connected with the Haitians, Americans, Europeans and other people I met in L&eacute;og&acirc;ne has helped me stay bonded to the experience and updated with how things progress there. I left Haiti with a strong desire to return. There's so much to be done, and I've seen firsthand that every bit helps. Q: I want to do something similar. How do I get started? To learn about volunteer opportunities in Haiti and Japan with All Hands Volunteers, visit www.hands.org. Also, All Hands is just one link in a long chain. Recently, the organization announced Project Tohoku its tsunami response effort in Japan. The idea of pitching in somewhere so far away, and so tragically devastated, is already incubating in my mind. It won't be a vacation if I go. It will be something more. That much I learned in Haiti. More resources for volunteers: Grass Roots United is another organization in Haiti offering volunteering opportunities (you pay your way there and per diem living costs). Volunteer Match allows you to plug in U.S. cities or your particular area of interest (ie. environment, mentoring) and see what opportunities exist for volunteering there. Projects Abroad focuses on short-term placements for students and professionals (two weeks, usually), with volunteers in 27 developing countries around the world. Fees for participating can be quite expensive. &mdash;Terry Ward 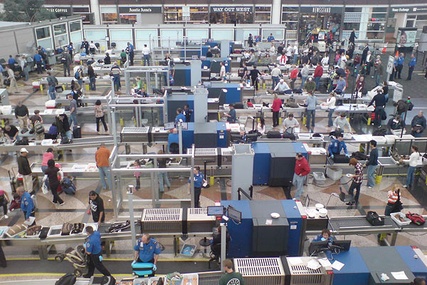 Poll: Would you pay extra for a fast-track security line?

JetBlue will soon offer speedier lines at selected airport security checkpoints for a small fee. Within a few months, customers who buy the airline's "Even More Legroom Seats" will be granted access to speedier TSA lines at airports equipped to handle them. The service&mdash;which also comes with priority boarding and seats with about 38 inches of legroom&mdash;will vary in price from $20 to $50 additional each way. At airports without fast-track lanes, JetBlue may give paying customers a free pass to jump to the front of the ordinary security lines. (I wonder how well that's going to go over with other fliers.) JetBlue's offering takes the priority boarding concept to the coach class masses. if (WIDGETBOX) WIDGETBOX.renderWidget('3819fb01-aff7-42b3-8fee-42095f9f3176');Get the Poll Creator Pro widget and many other great free widgets at Widgetbox! Not seeing a widget? (More info)For years, American and United/Continental have kept open fast security lines for their first-and business-class passengers. Since 2008, Southwest has offered passengers paying top dollar for Business Select status access to faster security lines at dozens of airports. WHAT DO YOU THINK? Would you pay extra for a fast-track security line? Vote in our poll! MORE FROM BUDGET TRAVEL Should D.C.'s museums start charging fees? Taxing controversy: Should hotels or booking engines be paying more in taxes? Rome to tax tourists instead of locals For more info on JetBlue's announcement: [Associated Press] [Jaunted]