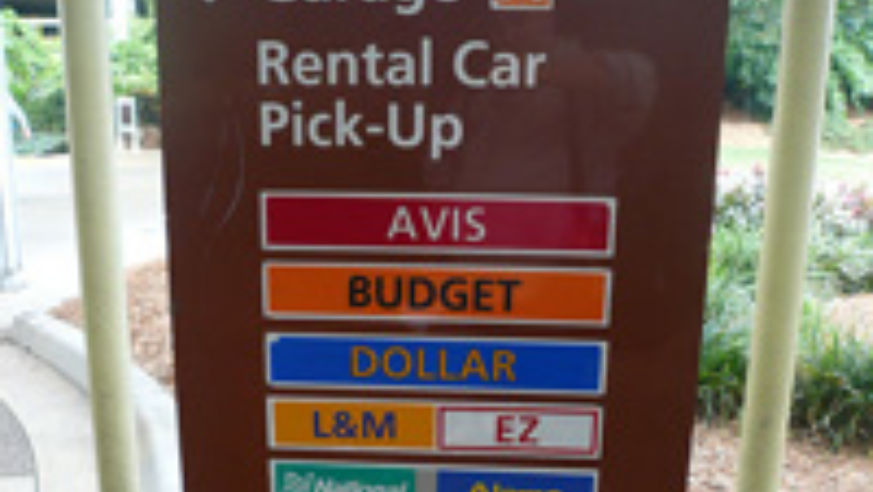 Travelers are charged when they reserve a hotel room and don't show up. Same thing with flights, of course. For car rentals, though, there's usually no fee for being a no-show. But could the system change?

For years, car rental operations have complained that they're the only major segment of the travel industry that accepts reservations and imposes no penalty when the customer doesn't follow through on their reservation. In many cases, a rental car can be reserved without even submitting a credit card. It's basically an honors system. Cancelling a reservation is encouraged, but there is generally no fee for the being a no-show without giving the rental agency a head's up.

As things stand, the absence of such a fee gives rental agencies justification for accepting more reservations than they have cars. The assumption is that some of those making reservations won't actually pick up their vehicles. When the amount of customers at the rental counter outnumbers the cars on the lot, though, the car rental company must scramble, and sometimes customers who have dutifully made reservations wind up out of luck without a car.

Increasingly, rental car agencies seem to want to change the system and start collecting fees on no-shows, just like their hotel and airline brethren. In a long guest column in Auto Rental News, Craig Parmerlee, director of business development for ACE Rent a Car argues that the time has come for "guaranteed reservations" in the rental car world.

In a recent program, ACE and CarRentals.com teamed up to offer guaranteed reservations, in which the agency would guarantee that the reserved car would be ready for the customer, and the customer would be obliged to pay in full in the case of a no-show. The scenario is similar to the "prepay option" many rental agencies now offer.

At this stage, about 20 percent of ACE's reservations are now guaranteed. After studying six months of "guaranteed reservation" data, ACE has concluded that the vast majority of customers who book this way are happy with the system. They understand the risks (losing money for being a no-show) and the upsides as well (cheaper rental rates). Parmerlee estimates that only 1 in 10,000 reservations results in an unhappy customer. As for that one individual, Parmerlee writes:

While we hate to see even one unhappy customer, we know that we are able to provide better service and a better value to the other customers because guaranteed reservations give us a more reliable basis for planning the daily operation.

Parts of the guaranteed reservation system make sense for rental agency and consumer alike. But it seems unfair for an agency to collect the rental fee in full from a person who never uses the car, and then the agency turns around and rents that car to another customer. In this situation, the rental agency is essentially doubling its revenues.

Some compromise and limitations on fees seem more appropriate and fair. The hotel business seems like the most appropriate model: Perhaps there could be a fee assessed only for customers who fail to cancel within 24 or 72 hours of arrival, and the fee would only relate to a single day's usage, rather than the entirety of the reservation. That would seem much fairer.

Interestingly enough, just as rental car agencies are pushing to become more like hotels or airlines in terms of fees, at least one hotel company is changing its reservation system to become more like car rental agencies. The La Quinta chain recently announced that it would begin accepting reservations without requiring a credit card number. The "LQ-Instant Hold" feature allows travelers to reserve a room on the day of arrival with the use of a smartphone (and a smartphone number).

The reservation will be held for four hours, by which time the traveler is expected to arrive at the hotel and check in. And if the traveler doesn't show up, no harm, no fee. No charge is assessed, and the hotel is free to offer the room to another guest.

Rental Cars May Soon Be Safer Thanks to One Angry Mom

Rental Cars: Are 'No Show' Fees in the Works?

6 Foreign Car Rental Fees to Watch Out for on Vacation