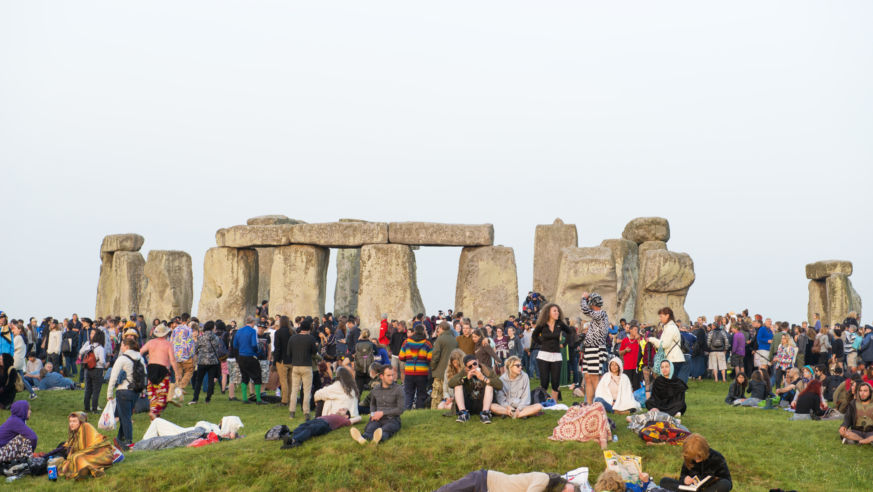 Who’s ready to party under the midnight sun?

For some countries, Summer Solstice means the beginning of summer. For many, the longest day (or shortest night) of the year is a time for revelry steeped in local culture and history. Take a spin around a maypole, dance in a glacier or catch a midnight baseball game, summer solstice celebrations around the world can be a truly magical experience.

The purpose of the impressive boulder formations of Stonehenge may still be cloaked in mystery, but they serve as the perfect backdrop of a phenomenal – and arguably the most famous – solstice celebration. Believed to be the site of ancient Druid solstice celebration, visitors flock to the site where they are granted one-day access to the inner prehistoric stone circle and face what’s known as the Heel Stone, to catch the sunrise over the sculpture.

Admission is free for the celebration; however, it has become so popular that thousands of people attend annually, camping out days in advance and donning traditional Celtic attire.

About one-third of the state of Alaska lies north of the Arctic circle, therefore a solstice celebration can be found pretty much wherever you land. Up north, Fairbanks goes for good old Americana with the Midnight Sun Baseball Game, a tradition since the town’s beginnings. The game kicks off at 10:30pm and pauses close to midnight for the singing of the Alaska Flag Song.

A little further south, Anchorage gets 22 hours of daylight and they use all of them with the Anchorage Mayor’s Marathon and the Solstice Festival & Hero Games, where first responders test their mettle in light competition and artists, musicians and more transform downtown into a party.

A diversity of cultures is represented in Ottawa’s three-day Summer Solstice Indigenous Festival, which fuses the longest day of the year with Canada’s Indigenous People’s Day. The area was the traditional territory of the Algonquin people before Queen Victoria declared Ottawa Canada’s capital.

During the festival, you’ll find food by celebrated indigenous chefs, traditional costumes and cultural events. A visually captivating Pow Wow brings out the best talent in the surrounding areas, competing for $75,000 in prizes. Admission is free.

During the solstice, the land of fire and ice turns into the land of rock and roll, taking advantage of the midnight sun with a blowout Secret Solstice Festival: three days of eclectic music acts which this year include local favorites along with Patti Smith, Morcheeba and the Black Eyed Peas. Iceland’s solstice revelry reaches back to the Norse nations, who believed in natural symbolism and saw the solstice as a time of celebration.

The Secret Solstice festival also features side events utilizing Iceland’s bounty, like an intimate music lineup in a lava cave and a party in Langjökull, Europe’s second-largest glacier, where the sounds bounce off the crystals and where, of course, you’ll want to dress warmly.

Midsummer in Sweden is sweet with romance, with traditional maypole dancing and gathering wildflowers for floral crowns. Tradition also says that if you place seven types of flowers under your pillow at midsummer, you will dream of your spouse. But who has time to sleep?

For the weekend surrounding the solstice, people fill the streets for a never-ending party, washing down pickled herring and dill-laced new potatoes with spiced schnapps and plenty of drinking songs, the dirtier, the better. Celebrations are family-oriented and usually happen out in the countryside but if you’re not lucky enough to snag an invite to someone's home, the open-air Skansen Museum in Stockholm is a good alternative.

When summer solstice comes around, Austrians play with fire. Their tradition of lighting bonfires on mountaintops not only looks spectacular, but they’re also rooted in the Middle Ages, where flames were used to ward off bad spirits.

In the 1700s, the fires were re-cast to fight against the imminent threat of invasion by Napoleon, and after the victory, Austrians pledged themselves to the Sacred Heart of Jesus. Since then, the mountains have been set ablaze annually in dramatic form, save for a brief time when they were outlawed by the Nazis. Today, Austrians still honor the shortest night of the year but have incorporated religious symbols like crosses into the festivities.

After a long and dark winter, Russians especially look forward to its solstice celebrations, so much so that they kick up their heels for two months straight. During these White Nights, culture lovers come out to the imperial capital of St. Petersburg for free events like opera and classical music performances and concerts held at the Mariinsky Theatre, the Conservatoire and the Hermitage Theatre.

A few days after the solstice is the annual Scarlet Sails celebration, with ships and fireworks and musical performances that, in the past, have included big names such as The Rolling Stones.

Croatia combines the skies, the scientific and the spiritual with their all-night Astrofest, held near the famous observatory in Višnjan. Kicked off by saying goodbye to the sun, celebrations include an evening of nerding out with observatory tours, stargazing, bonfires and digeridoo-woven live music. Mystical creatures are brought to life through storytelling and it’s all backed by the thrum of drum circles that don’t cease until the sun re-emerges the next day.