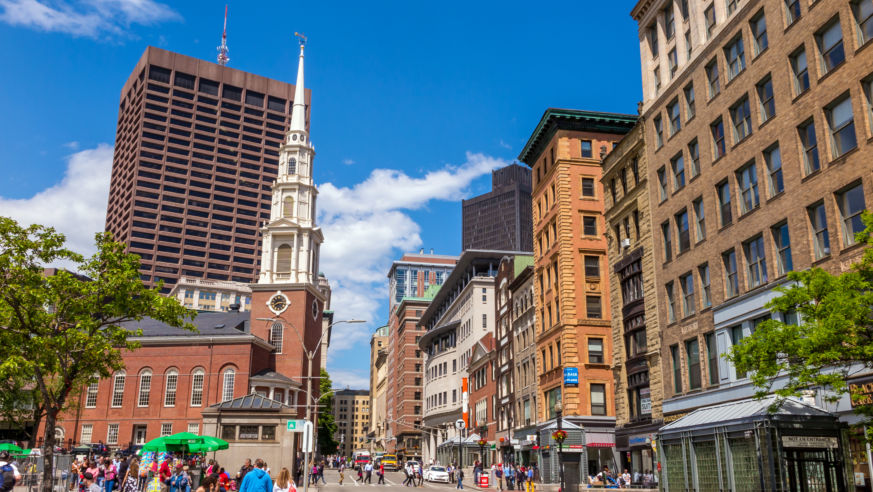 Boston's Freedom Trail is, appropriately enough, one of the many free things to do when visiting the Massachusetts capital.

Boston may have a reputation for posh living and pricey lodging, but it's also home to an array of freebies.

Bostonians pay notoriously high prices for baseball tickets and real estate. But fortunately, budget travelers can experience the best of Boston without paying a cent. Here’s the scoop on 21 free (or nearly free) things to do, see, hear, eat and even drink.

1. Follow the footsteps of revolutionaries on the Freedom Trail

The Freedom Trail is the best introduction to Revolutionary War-era Boston. This 2.5-mile, red-brick path winds its way past 16 sites that earned this town its status as the Cradle of Liberty. Follow the trail on your own, or hook up with a free guided tour by the National Park Service. Departing from Faneuil Hall, the tours max out at 30 people, so arrive early to secure your spot. Outside of the tour season, you can download a map to use. Many of the sites along the trail are also free to enter.

2. Sit in the Governor’s Pew in King’s Chapel

The stately Georgian architecture of King's Chapel contains a bell crafted by Paul Revere and the prestigious Governor’s Pew, where George Washington once sat. It’s a lovely setting for weekly noontime recitals (Tuesday). Admission is always free, but a $4 donation is recommended.

Lunch is not free, but the history lesson is. Take a look around the Great Hall and listen to a ranger talk about historic Faneuil Hall and its role as market and meeting place. Then head to Quincy Market to take your pick from dozens of affordable food stalls.

4. Take a tour of the Massachusetts State House

Visit the Massachusetts State House, the so-called `hub of the solar system’ to learn about the state insect (the ladybug) and to pay your respects to the Sacred Cod. Free tours led by The Doric Docents (volunteer tour guides) are Monday through Friday and visit the ceremonial halls, the legislative chambers and the executive branch.

5. Experience a sailor’s life aboard the USS Constitution

The USS Constitution is the world’s oldest commissioned warship, and it is docked in the Charlestown Navy Yard. Navy officers lead free tours of the upper decks, where you will learn about the ship's exploits in America’s earliest naval battles. You don’t need money, but you do need a photo ID.

6. Explore the fort and lounge on the beach at Castle Island

Castle Island isn't really an island, but a vast, green waterside park with amazing skyline views. The massive Fort Independence is open for exploration and free tours. Otherwise, you can relax on the beach, fish from the pier or dip your toes into the chilly harbor waters.

On Beacon Hill, the 1.6-mile Black Heritage Trail explores the history of abolitionism and African American settlement in Boston. Download a map for a self-guided walking tour; or meet up with the free NPS tour, which departs from the Robert Gould Shaw Memorial.

8. Climb to the top of the Bunker Hill Monument

The landmark obelisk marks the site of the fateful battle in June 1775 that turned the tides of the War for Independence. Climb the 294 steps of the Bunker Hill Monument to the top for an impressive panorama of city, sea and sky. You’ll expend nothing but energy.

9. Enjoy a day at The Boston Public Library

The Boston Public Library was built as a 'shrine of letters’ but it's also a temple of art and architecture. Free guided tours depart from the main entrance; or you can pick up a brochure and guide yourself around the stunning, mural-painted halls. The BPL also hosts author talks, musical performances and other free events.

10. Get a glimpse of Boston’s excellent art collections

Boston is considered the Athens of America, so you should probably check out the art. On Wednesdays after 4pm, admission to the Museum of Fine Arts is by donation (pay what you can, though $25 is suggested). On Thursdays after 5pm, the Institute of Contemporary Art hosts Free Thursday Night.

John F Kennedy was born and raised in this modest clapboard house in Brookline, now listed as the JFK National Historic Site. Listen to Rose Kennedy’s reminiscence, as you peruse the furnishings, photographs and mementos that have been preserved since the Kennedys lived here. Guided tours are half an hour Wednesday through Sunday (9:30am - 5pm). The site will be closed from November 2019 through 2020 for renovations.

12. Get the inside scoop on America’s oldest university

For 45 years, Henry Wadsworth Longfellow lived and wrote poetry in this stately Georgian manor near Harvard Square. The Longfellow National Historic Site is open Wednesdays-Sundays through October 27. The mansion contains many of the poet’s personal belongings, as well as lush period gardens.

The Charles River Esplanade is Boston’s backyard, a fine venue for picnics, bike rides and leisurely strolls. Even better, all summer long, the Hatch Memorial Shell hosts free events like outdoor concerts, family flicks and Dancing in the Park.

From the former factories and warehouses in the South End, artists have carved out studios and gallery space. The SoWa Artists Guild hosts an open studio event on the first Friday of every month (5 to 9pm). Come examine the art and mingle with the resident creatives.

16. Sneak a peek inside Fenway Park

If you can’t get tickets to the big game, you can still sneak a peek inside Fenway Park. The Bleacher Bar is accessible from the street, with a window looking onto center field. The bar gets packed during games when there’s usually a waiting list for window seating.

Bundle up! Boston is full of opportunities for winter fun. Havard Common Spaces hosts a Winter Fest at The Plaza which is open and free to the public. Try your hand at ice curling, ice bowling or ice shuffleboard.

18. Grab a cheap and tasty lunch from the Falafel King

Two words: free falafel. That’s right, Falafel King customers are treated to a free sample while they wait. If you’re looking for lunch, this hole in the wall is quick and delicious.

Head to Jamaica Plain to see the birthplace of America’s original craft beer. On the Samuel Adams Brewery Classic Tour, learn about the history of the company, witness the brewing process and sample the goods. By 'goods’, we mean frothy lagers, refreshing pilsners and tasty ales. Tickets are first-come, first-serve; tours run Monday - Saturday (11:15am-5pm) and are open to all ages. Must be 21 to drink. The suggested $2 donation is passed on to local charities.

20. Lunch with a side of history at Boston Common

Unwind at America's oldest park. Enjoy a family picnic or just relax and people watch. Summertime is for Shakespeare and the winters are for ice skating at Frog Pond.

21. Let your kids romp at the Boston Children's Museum

From the Art Studio to the Construction Zone, the Boston Children’s Museum is fun for all. It’s not free, but 'Target Fridays' mean that admission is only $1 on Friday after 5pm.