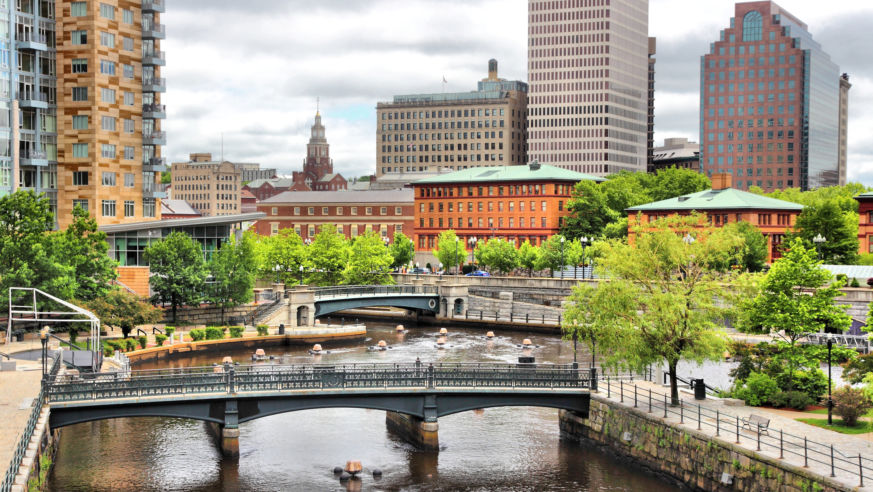 When Curt Columbus moved to Providence from Chicago to become artistic director at the renowned Trinity Repertory Company, he wasn’t sure what to expect, coming from one of the cultural capitals of the country and all. What he found, however, was a place that's "rich with cool, funky, fun hangout places,” he says. With an abundance of creative and exciting cultural, historical, and dining options, some neighborhoods have enough to do to fill an entire afternoon without having to get in a car. And some of these places are spots locals tend to keep to themselves. Despite its small size, it’s a huge destination.

“Part of what’s so great about it is that you can easily get to the woods for hiking, or to the beach and Newport and all that other stuff. People can come and spend a week because there’s a huge range of things to see,” he says. “And Providence great just a great wander city. People like to stroll and stop in places, have a drink in one place, eat in another, and have dessert in another.”

We asked him for some of his top recommendations for anyone looking to explore the city beyond the standard guidebook highlights. He had a lot to suggest.

Spend an afternoon strolling Providence’s scenic East Side. The main thoroughfare, Blackstone Boulevard, is three miles end to end and back.  First fortify yourself at Three Sisters, an ice cream paradise with daily specials. that in the past have included extravagances like maple brownie peanut butter. By the time you’ve walked that off, you’ll be ready for dinner. In keeping with Curt’s suggestion of breaking up a meal at different venues, hit Garden Grill, which specializes in vegan and vegetarian fare for light and delicious apps. Two doors down is Rasoi, an Indian restaurant where the food is “just off the charts,” he says. Finally, just paces away is Wildflour, which also offers vegan treats that Curt recommends even if you’re a full-on carnivore.

In the Downtown area, Westminster Street is an historic strip that seems designed for wandering. Along the shop-lined corridor are must-sees like Symposium Books, which features records amid the bookshelves. Next door is Small Point Café, a spot where locals gather over espresso, soups, and sandwiches. Follow along to Arcade Providence. The oldest indoor shopping mall in the US, a national historic landmark, features only-in-Providence shops like the HP Lovecraft store, devoted to all things of the cultish cosmic fiction writer who called Providence home. Refuel—or relax-at New Harvest Coffee, a coffee roaster and whiskey bar.

If you stay through the evening, you’ll want to have dinner at Sura, a Japanese/Korean restaurants that’s popular among discerning yet budget-minded students. Finish up with a nightcap at The Eddy, a cocktail bar with a selection of classic and creative modern cocktails.

Chez Pascal: Though it’s a high-end restaurant, they have an option that won’t break the bank at Wurst Kitchen, a window in the front where, in the evenings, you can walk up and order some of the finest house-made wursts and hot dogs and slather them with amazing relishes.

Foo(d): AS220 is an arts space that serves as a lively hangout spot for creative types. It makes sense, then, that there’s an eatery here, too. The airy restaurant specializes in locavore fare designed to feed artists, Curt says, so you’ll find huge portions for the budget-friendly price of $10. Curt grabs an order of the popcorn-like crispy chickpeas ($2) a few days a week.

Despite it being one of the area’s top regional theaters, Trinity Rep offers $20 ticket deals for every show. Also, it’s affiliated with Brown University, which offers student performances for $5 to $10. But these are no scrappy affairs. “It’s like going seeing an actor before they were famous. You’ll catch actors that you’ll see for years to come," he says.

AS220 is a local favorite located between Brown and Trinity. To hear Curt talk of it, it’s “an un-juried and uncensored place for artists, from visual to performance art to music to slam poetry. There’s a ton of programming and rotating gallery exhibits in three downtown spaces. You’re absolutely seeing people as coming into their own.” It’s located near Swan Point Cemetery, a 200-acre garden cemetery home to HP Lovecraft’s resting place.

Rhode Island School of Design has its own museum with collections that Curt says are nothing less than “awe-inspiring.” Unlike most museums, he explains, they curate paintings, furniture, home items, clothes, and costumes all in the same space. “You’ll have a Jackson Pollack next to a Corbusier chair next to a Nick Cave jacket. It’s just so interesting to see how all art is interconnected. Fashion is painting is theater is music. It’s all influenced the same way,” he marvels. Sit down and take it all in when you’re done at Bolt Coffee, the adjacent coffee shop with plenty of sandwich offerings.