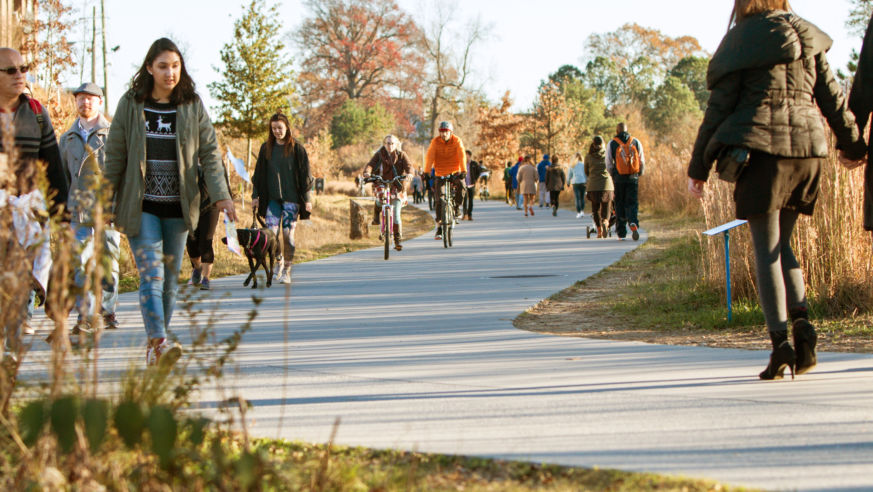 How some cities are remaking yesterday’s great spaces for the future.

For many Americans, repurposing marvelous old buildings is always better than tearing them down. And while the term “urban renewal” comes with a little baggage, it’s hard to argue with its particular way of salvaging and adapting neglected older spaces for our modern world. City planners and architects across the country have found spectacular ways to reimagine vintage structures.

So for those travelers who appreciate the splendors of historic preservation and civic innovation, this shortlist of revitalized urban destinations is for you.

One of the great Southern cities has circled back to its roots with adaptive-reuse projects across town – most notably along the BeltLine, itself a remarkable project.

In 2005, Atlanta opened the first BeltLine section, a retired railway corridor–turned–multi-use trail that’s today lined with public art and parks. It drew more residents and businesses to the east side, and sparked the transformation of a massive old Sears distribution complex into Ponce City Market, now a dazzling mixed-use retail, dining, commercial, and residential center. Other industrial spaces along the trail have found new life too, like Inman Park’s Krog Street Market. More are sure to follow as new BeltLine sections open up in coming years, eventually spanning 33 miles.

Waterfronts across the country have been rediscovered in recent decades, thanks to city planners realizing the potential to replace retired wharves with versatile public space. In New Orleans, such creative thinking led to Crescent Park, a 1.4-mile linear park just east of the French Market. What once was a bustling industrial riverfront has since 2014 been a busy 20-acre green space with picnic areas, a dog run, and seasonal events and festivals.

The Crescent City is seeing adaptive reuse elsewhere too, as seen across the Warehouse Arts District, at spots like the Old No. 77 Hotel & Chandlery, a modern hotel that prizes the building’s 19th-century heritage. In the Central Business District, Pythian Market is a locally curated food hall inside a restored 1908 tower with a fascinating tie to the city’s early civil-rights movement.

From parking lot to 12-acre park – that’s the story of Houston’s downtown Discovery Green. With the support of local philanthropy foundations, in 2002 the city seized the opportunity to convert concrete lots into an urban park with playgrounds, music stages, trails, gardens, bocce courts, restaurants, and other public amenities. The LEED-certified park now draws more than 1.2 million annual visitors, and has inspired revitalization projects across Midtown and East Downtown neighborhoods.

Washington’s Southwest neighborhood had for decades been a neglected corner of town, due partly to accessibility challenges caused by highways dividing it from major attractions. But that changed in 2017, when a $2 billion development transformed the industrial waterfront into the mixed-use District Wharf.

The 10-acre neighborhood is now more easily accessible from the Metro (with a short walk or free shuttle), by car or cab, or by water taxi or private boat. These days, visitors from around the region flock to the Wharf that’s home to both restored historic structures and new “green” architecture – forming a year-round recreation, entertainment, and dining destination on the Washington Channel.

Old warehouses remain prized property for urban developers looking to adapt rather than build anew. Just head to the Crosstown Concourse in Memphis, where a humongous Sears store and distribution center, abandoned in 1983, became a thriving “vertical urban village” in 2017. The art deco complex that once served millions of mail-order customers now accommodates shoppers, diners, residents, and workers across its 1.2 million sq ft. It’s even home to a charter high school, medical clinics, a YMCA, and a contemporary arts organization with galleries and performance space.

(Memphis is one of several US cities that have reused retired Sears complexes. You’ll find similar projects in Minneapolis, Dallas, Los Angeles, and Boston.)

Not so much a single project as an evolving investment, Las Vegas’s Downtown Project is the city’s ongoing urban-revitalization initiative in its historic Fremont East/East Village districts. Driven (and financed) by Zappos founder Tony Hsieh, who parked the company headquarters there in 2013, the Downtown Project has poured $350 million into the neighborhood’s 61 acres.

The industrial character of Providence’s Valley neighborhood turned out to be a perfect setting for a vibrant urban arts studio. In 2002, the Steel Yard took over the century-old Providence Steel and Iron building just a year after it shuttered. Since then, all 12,000 sq ft have served as nonprofit workspaces for ceramics, woodwork, welding, blacksmith, and jewelry creators on the banks of the Woonasquatucket River.

The Steel Yard reopened a refreshed space last year, and along the way it’s inspired other proprietors to make use of Valley’s lofty, leftover brick complexes, including the “elevated street casual” eatery Troop. Look for more action in this area over coming years, as city planners develop a linear park called Woonasquatucket River Corridor linking Downtown Providence to Valley in the coming years.