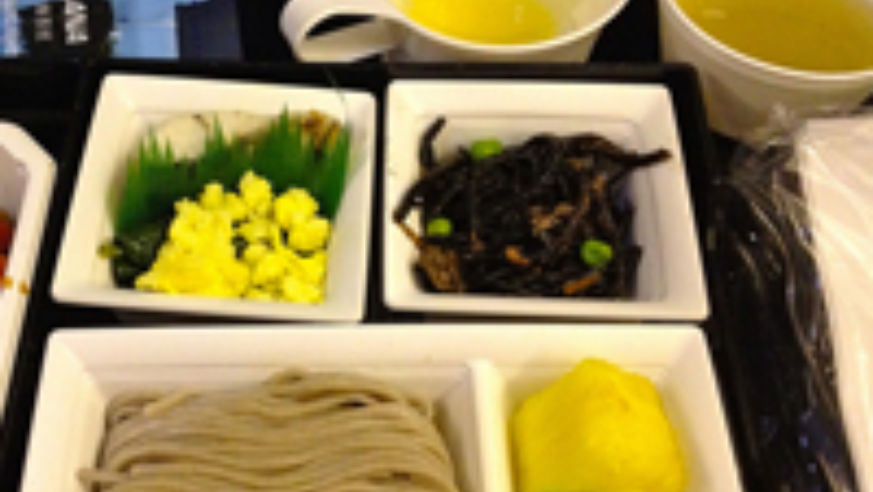 Courtesy LWY/Flickr
When's the last time you had a good in–flight meal?

I got a big surprise on my recent ANA flight to Japan: a meal. Not just one meal, mind you, but two: a 5–course dinner featuring chicken cutlet and soba noodles and a full breakfast including melon, yogurt, and a sort of hot Asian oatmeal. I can’t remember the last time I was served a proper meal on a flight—at least, one that I didn’t have to pay for—and I enjoyed these immensely. The most delicious part of all: I was flying in coach.

Like many Asian airlines, ANA has continued to serve in–flight meals on its international flights to all its passengers, unlike the penny–pinching American companies who often stiff the riff–raff in coach. It’s always been fashionable to whine about airplane food, either the quality or the quantity or both (just like the old joke about the Jewish grandmother who kvetched that the food at her new retirement village was a lousy and the portions too small).

But it wasn’t until my ANA meals (did I mention that I got two on the return trip, too?) that I realized how much I’d missed in–flight food. The dishes themselves were tasty enough, but it wasn’t the food per se that I enjoyed. It was the way the meals broke up the long flights to and from New York, giving them a sense of pacing and time passed. The meals transformed a mere flight into a journey, an experience. The flying time may have been 12 hours, but that never felt like drudgery. It felt exciting, like when we were little kids on a big plane trip. Back then, my mother would steal the airline silverware because it was so much nicer than what we had at home. Now, you’d be stealing plastic utensils—if you were lucky.

We all know why the American airlines cut out their food service: the bottom line. But it’s hard not to wonder if that was a pyrrhic victory. Everything about flying has become harder in the last decade; airlines are about as beloved as politicians and Wall Street bankers. Would a decent, reliable, in–flight meal take some of the bitter taste away from the whole experience? Would it make flying feel special again, enough of a reward to put up with the hassles at the airport? Would getting served a meal—even a mediocre one—change the way you feel about flying?