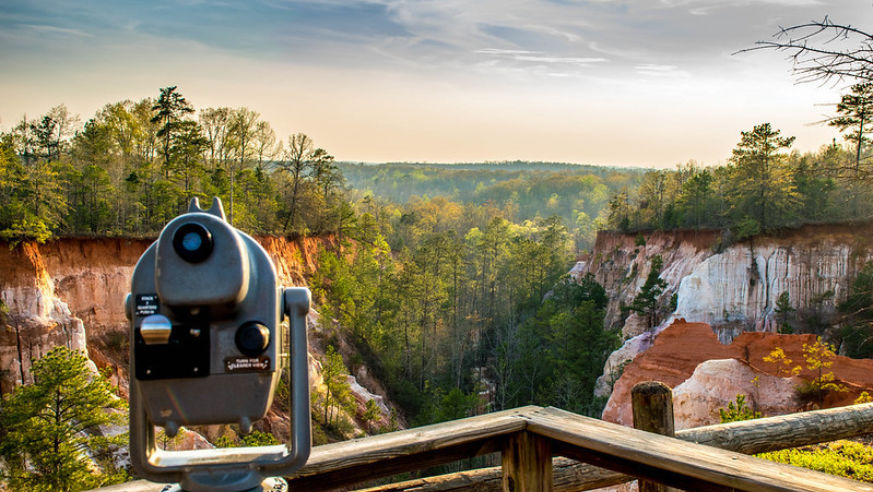 You don't have to go out West to see stunning canyons. Providence Canyon is a geological wonder just outside Atlanta.

A steady flow of water runs through the bottom of Georgia’s Providence Canyon, but unlike other canyons, that’s not what carved it out of the earth. Formed by enslaving plantation owners who improperly managed the land about 200 years ago, it’s now a state park with hiking and camping options. Known as “Georgia’s Little Grand Canyon,” it’s been such a popular spot during the Covid-19 pandemic that the park has had to limit car access for day hikers who aren’t staying at one of the six primitive campsites.

Even with vaccinations underway, outdoor vacations close to home remain a great option for safely getting out of the house. If you’re in the southeast U.S., you don’t have to travel far to feel like you’re in the American West. Providence Canyon is a geological wonder of its own.

Located about 150 miles southwest of Atlanta near the Alabama border, the canyon sits in one of Georgia’s least-populated counties. It’s named for the Providence Methodist Church, which was swallowed by the newly forming canyon gorges in the 1800s. A new church was constructed across the road after the chasms started to form.

From observation decks near the parking lot, you can see the islands of remaining ground-level earth with a few pine trees that dramatically drop off into the canyons below. But to really experience Providence Canyon, you’ll want to take a hike along the canyon floor.

Walking down into the gullies is like entering another world. After a short tree-lined descent, you’re on a flat plane looking up at the layered pink, yellow, and purple canyon walls. You’re now more than 100 feet below where you started.

The ground has eroded away so much that it’s hit the water table, so rain or shine, there’s a stream of water pulling silty soil along the floor of the canyons. You’ll want to wear ankle-height hiking shoes and be prepared for that iconic Georgia clay dirt to get on your shoes, pants, and inexplicably other parts of your clothes or body where you didn’t expect to find it. From the main loop trail, you can fork out into individual paths to nine canyon walls. A backcountry trail through the shallow creek leads to the primitive campsites.

The canyons were formed in the early 1800s, after the Muscogee (Creek) indigenous people were forced from their land and plantation farms growing cotton took over the area. The plantation model of agriculture, reliant on enslaved labor, didn’t take precautions to prevent erosion. They couldn't have been prepared for how quickly and dramatically the land would change.

Year after year, the cotton and other crops washed away along with clay and topsoil every time it rained. Within 20 years, enough of the ground had sloughed away that gullies four feet deep had formed. This erosion continued over time, and the gullies are now as yawning as 150 feet deep and 350 feet wide.

The canyons are still evolving today. Every year, rain and erosion wear away another two to five feet of land. Their sandy sides are fully exposed, so there’s not much the park staff can do to stop it from continuing to slough off. Most of the erosion these days is horizontal, widening the gullies: the canyon floor now has pine trees and other vegetation that keeps the soil from running off, and there’s not much deeper it could go.

In the 1930s, the local paper in nearby Columbus, GA, started  to make Providence Canyon a national park, hoping to bring tourists driving in to see “the natural wonder and beauty. . .instead of having it principally a discussion of erosion.” But despite the newspaper campaign emphasizing the “natural wonder,” its unnatural origins kept Providence Canyon off the national parks list. Georgia made it a state park in 1971, and it’s presented as the human-created formation that it is.

Although Providence Canyon wasn’t naturally formed, it reveals parts of the natural world that are normally hidden. There are 43 different shades of sand that create sunset-like patterns along the canyon’s walls. The shades come from four base colors created by minerals in the soil. In addition to the classic red Georgia clay, which gets its pigmentation from iron, there’s white from kaolin, yellow from limonite, and purple from manganese.

Above the canyon walls, there are other unnatural features: walk up the loop trail and you’ll emerge to the ridgeline where a small collection of cars has been slowly reclaimed by nature. The cars date back to the ‘50s, and only the rusted-out bodies remain — no glass, no tires. Leaves cover the interior, and root structures grow in the tire wells. The park managers have determined that it would be more harmful to the wildlife to remove the cars than to leave them as they are, slowly becoming a part of their surroundings.

The canyons are a reminder that everywhere on earth has been shaped by humans in one way or another. Whether by plantation farming practices or pumping carbon dioxide into the atmosphere or moving plants from one continent to another, human life has completely altered the planet. Providence Canyon just makes that impact more visually obvious. It’s a state park for the Anthropocene, and a fantastic day trip.