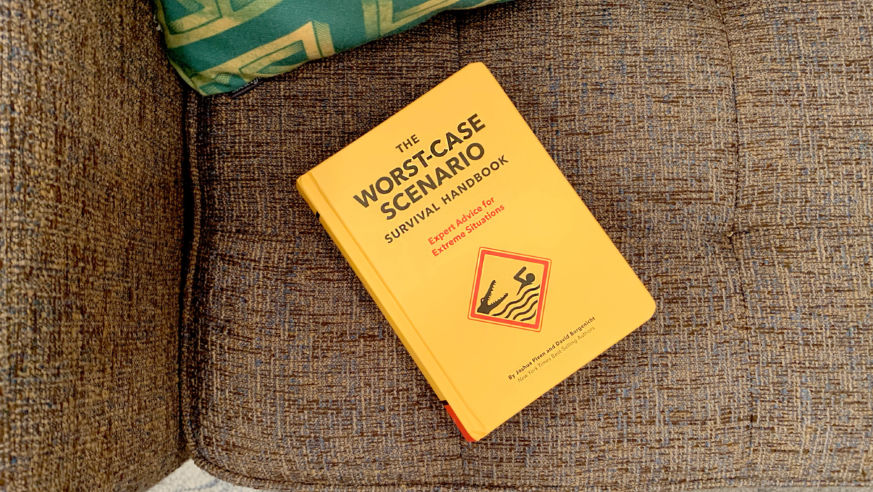 A 20th-century bestseller gets a makeover for the new millennium.

Fending off sharks, escaping from bears...getting through Y2K? The world looks a bit different today than it did at the turn of the 21st century, when The Worst-Case Scenario Survival Handbook was originally published, but according to authors Joshua Piven and David Borgenicht, the book’s premise is more apropos than ever. “It’s odd,” Josh says. “It seems like once again, the timing is perfect. In 1999, it was Y2K. Now it’s…everything!” In honor of the bestseller’s 20th anniversary, the two are releasing an updated and expanded version of their survival manual (on sale April 30; worstcasescenario.com) for the new millennium. With tips ranging from how to hot-wire a car to how to deliver a baby in a taxicab, the authors’ sense of humor was a hallmark of the first edition, and two decades later, it’s still front and center. (How do you know if a clown is murderous? Is he wielding a weapon? Sharp teeth? Blood on his costume? Probably dangerous.) Covering an array of topics travelers will find handy—in-flight emergencies like extreme turbulence, flagrant seat-recliners, and tantrum-throwing kids, plus man-made emergencies like car crashes, train derailments, hijackings, and hostage situations, natural disasters like wildfires and tsunamis, and tech problems like navigating without GPS and what to do if your phone catches fire— the updated sections provide a comprehensive guide to dealing with our most pressing dilemmas. We emailed the authors to discuss the new info, the travel tips they rely on personally, and the backstory on that whole creepy-clown thing.

How did you decide on the topics for the new chapters? Did personal experiences influence those choices? (...Please tell me the murderous-clown section was completely hypothetical.)

Josh: All the clowns I know are happy-go-lucky types; Dave must know all the murderous ones!

Dave: Thankfully, my personal disasters have been more domestic and less life-threatening over the past few years! I’ll have a lot more to share when we write The Worst-Case Scenario Survival Handbook: Mid-Life (that’s a joke—but only sort of!). Worst-Case has always been about providing people with both real information and entertainment—about making people feel like they can face their real fears and their irrational ones—so that’s where things like clowns fit in. Basically, we looked at what fears felt most topical and relevant in 2019 as opposed to in 1999.

Josh: There were some obvious situations we felt were timely and we had to cover. From news reports of autonomous cars injuring (and in one instance, unfortunately, killing) people, that was an obvious choice. Drones were another, since they are becoming ubiquitous, and, again, there are news reports of them causing havoc at airports, so we kind of just extrapolated from that. Tech emergencies was definitely a section we had to address.

Did anything feel different when you were writing the scenarios this time around?

Dave: We are living in tense times—these are times of intense disconnectedness from each other, of global unrest, of extreme imbalance with nature, of political and economic imbalance—way more than when we were writing back in 1999. That’s what really made us want to relaunch the book and the brand.

Josh: In general terms, the writing wasn’t that different since the process was the same: Do the research, find the expert, do the interview, and so on. Of course it took awhile of the two of us brainstorming to come up with the new sections that we liked, and that were “actionable.” On some of the specific entries, it was a little different because we had to be cognizant that now people rely on their phones to get ALL information, survival or not. So, clearly, in some circumstances you might be able to use a phone to get help (or instructions), but in some, you still really can’t, because you won’t have time. Or the alligator will have swallowed it.

Ha! For plenty of people, losing their phone would be an all-time worst-case scenario, never mind the gator. Given that you’ve added sections on identifying fake news, surviving a protest, and dealing with out-of-control smart homes and autonomous cars, it seems like you gave equal consideration to the current political climate and the tech industry. Was that your intentional focus for the new chapters?

Josh: Yeah, tech was 100 percent something that was on the radar—flaming phones, phones in toilets, getting doxxed. The book wouldn’t be a 21st-century survival manual without those kinds of entries.

Dave: Most of our fears come from a feeling that we lack control over our lives, and sadly, most people feel like we have even less control than we did twenty years ago—I would suggest mostly because of the mini super-computers we carry in our pockets and the constant barrage of “news” and social media and distractions they bring us. Our phones can been a great tool, but they can also be one of the most dangerous items we have.

Josh: I think there’s the (dangerous) political climate, and then also the climate-climate, as in disasters that are clearly climate-related, or getting worse due to climate change (How to Survive a Wildfire, and so on). We’ve always tried to tackle some of the fears that we think are common, or at least commonly held if not commonly occurring. Personally I think the issue of the lack of trust in journalism is very worrisome, so we wanted to address that in our usual way. (I’m a journalist, so do the math…)

Have you been in situations where you’ve had to put any of your travel-related tips to use? I'm particularly curious about the section on how to survive in-flight emergencies—the Snakes on the Plane segment was a nice bit of comic relief (though also very useful, and I will definitely be pulling my feet up on the seat if there are rattlers on board!), but the advice for landing a plane and surviving a hijacking felt especially charged.

Josh: Not the most extreme ones, thankfully. I have purified water, and I have used some of the navigation techniques. (I had my phone, but only as backup, of course!) And I’ve had an extreme seat recliner in front of me on way too many flights. For budget travelers, this is probably a regular occurrence.

Dave: I have used our own worst-case scenario advice when dealing with flight delays and crying babies on planes. I once had to get back into my rental car via the trunk because the key was inside, and I did once stowaway on a train back to Philly because I had lost my wallet and had no way to pay.

I mean, who hasn't done that? So what’s your favorite scenario in the book?

Dave: I loved writing the “How to Tell If You are Being Gaslighted” chapter—I think that’s happening a lot these days, and it’s important to recognize what you can and can’t do when someone believes they are infallible and can’t see the bigger picture. Sadly, there isn’t much you can do to change the attitude of an absolute gaslighter, so it’s really about recognizing it and moving on, but if the gaslighter seems a bit more moderate and is willing to actually listen to you, then trying to model the more open point of view the gaslighter needs can work.

Josh: I continue to like the classics (shark, bear, alligator, quicksand), but in terms of the new ones—and ones I’d want to remember, if it came down to it—are How to Survive a Flash Flood, Tsunami, Wildfire, and Grid Collapse. Not coincidentally, I think we all need to get used to a world where some of these extreme survival situations may become more common. The advice in the books is both timely and timeless—it sounds totally corny, but I really do feel that way.

This interview has been edited and condensed.